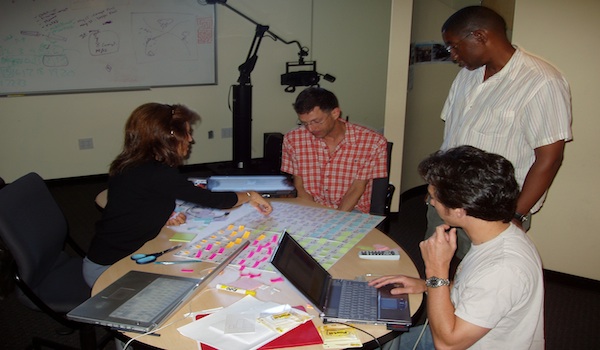 As the new year rolls around, like many political science professors, Kareem Crayton is thinking about the possible repercussions of next year’s 2010 census and what he calls the “opening skirmishes” of the partisan fight over “who’s going to be counted” and where the boundaries of congressional districts should be drawn for the next decade.  However, since working on the civic education website, The Redistricting Game, with a team of interactive media designers at the University of Southern California, Crayton’s attitudes about collaboration within the academy and participation in broader political conversations probably differ somewhat from those of his more traditional peers who still communicate their ideas about systems of representative democracy only through scholarly publication in print media.  Crayton suggests that The Redistricting Game could also inspire average voters to play a more creative role in legislative problem-solving.  “All the ideas about transforming our political system don’t need to emanate from the state house or the university.” As the game evolved, Crayton was more than an outside subject matter expert, because the team consulted him throughout the process of modeling his research as a playable simulation.  “It was interesting to learn how people from another discipline, software design, go about creating their products,” Crayton explains.  “They were people who knew a lot about software, and I was the person who contributed expertise about redistricting.”

Getting Real-world Politics into A Virtual Game
This collaboration among “very different approaches” wasn’t always easy.  When it came to the best way to change the districting system, “I don’t think we ever unanimously agreed about the best approach to drawing districts.”  Project Lead Chris Swain thought that the fairest and most elegant solution would be to use the shortest-splitline algorithm, but Crayton cautions that “messy politics” can’t always be translated  into “aesthetically pretty or mathematically appealing districts” of the kind favored by game designers and software engineers.  “That’s not to say that computer programs can’t be helpful, but at the end of the day hard decisions still have to be made that disappoint one interest or another.”  Nonetheless, Crayton hopes that if the game stimulates the same impassioned conversations that took place in the development process, people will feel “treated fairly enough that they want to play again,” because the team had successfully managed to “operationalize a system that we disagree about.”

Creating computer games to promote civic education has been funded by a number of universities, philanthropic organizations, and public broadcasting channels.  In recent years, game theorists and game designers have created a number of educational games about political and legal systems.  For example, developers at MIT worked to create Revolution to dramatize how our eighteenth century forebears made political choices that led to the overthrow of colonial rule, James Paul Gee collaborated with former Supreme Court Justice Sandra Day O’Connor to create a series of games called Our Courts, and award-winning game designer Tracy Fullerton has developed Participation Nation to explain the  constitutional issues relevant to the civil rights movement.

Playing the Villain
Although all these civic education computer games show complex conflicts between different political and legal stakeholders, The Redistricting Game is unique in having the player actually assume what would seem to be the position of a citizenship villain.  Players win points in the game by taking the role of a manipulative redistricting consultant who attempts to game the political system to favor one party’s side and help them consolidate power.

Crayton defends casting the player in a role that would seem to be a “bad guy,” because it allows the game’s users to be “in the mind of a person writing new laws or making new districts” to provide more “understanding of how people associated with elected offices veer off the road of accountability and transparency” and to see the fact that initial purposes may not be as corrupt as the ultimate outcome.  Besides, he insists, “You can’t know what’s fair unless you know what’s unfair.”

Nonetheless, Crayton wants to make sure that educators understand the limits of games, because they can’t represent all the aspects of an “opaque and complex system.”  Furthermore, he notes, “a game has an end, you push things around, and you don’t have to cooperate with a lot of other people.”  Because real reformers “need to convince other people,” there is no “silver bullet to solve an impasse,” as there might be when tackling difficult obstacles in a game.  Crayton argues that games may lead people to get “actively engaged in the discussion,” but the “same problem” of the person having the right to vote but not actually getting to the polls exists, since political intentions don’t always lead to political actions.

Next: Privacy, Preferences, and Politics
What’s the next big issue for digital media and learning when it comes to political participation?  Crayton reminds us that “in our increasingly digitized world, private behavior may be used to indicate ideological views” when drawing voter districts, as political parties begin to create elaborate computerized databases with highly granular information about the products we buy, the websites we visit, and the nodes in our social networks.   Because online citizens should realize that data is being collected about their preferences constantly, whether at the grocery store or on Amazon.com, this kind of monitoring should probably come as no surprise.  Besides, Crayton is skeptical that any Big Brother snooping scenario would be infallible, particularly since the most reliable predictor of political behavior is still “where you live.”   “Politicians have always gathered information on their constituents; now they are just aided with computers.”  Finally, Crayton observes that “these are all just predictive models,” and “even the best political operatives are going to be wrong sometimes.”