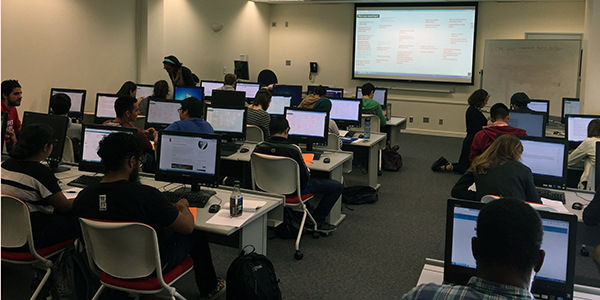 Recently, I wrote a post for DML Central about an online course that’s receiving unusually high course evaluations and is being offered by the Culture, Art, and Technology program at UC San Diego. It’s a course in which online literacy is both the form and the content of the assigned curriculum. The instructor, Alexandra Sartor, took time out from teaching for an interview with DML Central to talk about her experiences, teaching the course. She laughed about the fact that her ultimate achievement was probably having “almost no comments about the form of the course.” Despite the digital focus of the course material and delivery, the responses of students said relatively little about computational media and distributed networks, which Sartor attributed to overcoming “technical issues” in earlier phases of course development. “When the technology of the course was out of the way, it didn’t feel as important.”

Sartor wasn’t always a digital rhetoric specialist. Her dissertation research examined water rights activism and focused on how people used writing to effect change in more traditional channels. But, she identifies with students who know that understanding the conventions of digital culture will be critical for success in their future careers. “This kind of writing was common in my early years as an undergraduate and later in my first experiences in the working world.” Once “email correspondence became the norm” she experienced “a major moment of literacy development” in her own lifetime, because she was “writing for an audience and writing a great deal of material, and asking for feedback from an audience.” She described how “in one of my first jobs out of college, I was an editorial assistant at a scientific journal, and so I was doing a lot of correspondence with people who had submitted to the journal from across the country. I was interacting with people I had never met in person, which was my primary mode of working with those folks.” She hoped that these remote experiences of collaboration and composition in the course that she taught could be similarly meaningful to students.

Based on our other conversations over the years, her investment in online education seemed more motivated by her own desires for problem-solving at a personal scale rather than the kind of top-down vendor-driven initiatives that I have argued elsewhere are often doomed to fail. “I think I was interested in how this course, which was always a puzzle to me, based on my previous experiences teaching a writing course in a lecture environment, might benefit from a new format. I was interested in the flipped classroom model, and doing that online seemed like an interesting opportunity to use some of the techniques I was already using in lecture: breaking students into discussion groups, having them write in lecture.” The collegial possibilities were also exciting to her. “I was also interested in the collaborative aspect of working with faculty from multiple campuses and eventually students from other campuses, which was intriguing.”

Although the course focuses on the online identities of students, Sartor found herself also reconsidering her own identity as she found a pedagogical style to which students responded particularly positively. “One thing I’ve been thinking about lately is that the way I present myself in the online course is pretty different from how I present myself in the face-to-face course. In the first iteration of the course, I presented myself in a way that I assumed would be most effective.” She described emphasizing a scripted, polished presentation and a no-nonsense persona of clarity and precision. “Now I am concerned less with my authority as a teacher in an online environment. Before, I presented myself in a more authoritative matter, which was not as effective, because I had a certain feeling of a barrier between myself and the class.” She explained how she was willing to risk “being more effusive, more warm in written communication, more bubbly for lack of a better term” than her initial impulses dictated. “I was consciously thinking about my identity in the course and the opportunities it creates for the students to practice communicating,” which she tried to reinforce “in my discussions with TAs” who lead synchronous discussion sections using videoconferencing technology.

“Watching the students learning how to become skilled online participants reminds me of teaching first-year composition, because part of what you are teaching in a first-year class is how to be a college student.” She argued that this practicing adopting a new identity was analogous to addressing graduating seniors who need to consider “how to present yourself as a professional online.” Although the course might emphasize some “basic elements of self-presentation,” she was extremely pleased with message board posts, which were “really creative in both their framing and their responses to one another.”

“With the critical selfie assignment, they might even resist the assignment in creative ways, by presenting a different version of themselves and analyzing self-presentation in their commentary,”

Like others who have used and adapted resources from The Selfie Course, Sartor described the advantages of starting with something commonplace and making it strange. “I think that the thing that works so well about it is that it is something with which the students are familiar, but the assignment asks them do something new with it. They have fluency in describing a selfie and saying why they are wonderful or why they think they’re ruining society. Giving students the opportunity to analyze a shared reference point gets the gears turning and illuminates questions that are central to the course about how context and audience can influence a message and how we present ourselves online.”

In presenting a more familiar and accessible version of herself, she chuckled about being a virtual professor. “I just had office hours with a student who said ‘I’m going to come to your office hours more often, because otherwise you don’t exist.’ ” Sartor has considerable success with using more “appealing low-fi videos” that “feel more familiar and accessible to students.” The videos are shot in semi-real time with a sense of greater responsiveness. Although faculty often get advice that emphasizes slick, production values and studio delivery, Sartor offered “advice not that different from best practices for the teaching of writing teaching in general: think about consistent responsiveness, closing feedback loops,” which might allow instructors to “appear to be a little more on the fly, responding to the needs of the students, as opposed to something that could be presented to any student in any context.”

As a published author, Sartor’s expertise focuses on the critical area of “transfer,” which applies learning gained in one context to another. It’s been a focus of many who study digital media and learning who are interested in how problem-solving or collaboration in games or social networks might apply to academic subjects. Transfer can be a tricky matter in writing studies, where discourse is often focused on specific contexts, but Sartor sees online learning as an interesting way to think about moving from one context of communication to another. She explained that “the hardest kind of transfer — what the research calls ‘far transfer’ — involves when the context is radically different, because it typically requires much greater expertise in a field and and a refined rhetorical ability to identify similarities in practice or rules that may cut across contexts. The online course may present a context more similar to the one many students will encounter in workplace writing which could facilitate transfer.”

Certainly, she noted “the format of this online course in particular, affords a lot of opportunities for reflecting: reflecting on assignments, reading others’ reflections, commenting on those reflections.” She argues that the habits of reflection that are critical to achieving transfer experiences might “proliferate more naturally as students get in the habit of reflecting and adopting a reflective stance when composing outside the class as well.”

Of course, they also work within a rule-based system in an online course, acquiring what some experts have called “procedural literacy.” As Sartor notes, “I think even though I said that I have been working on an online teaching persona that is a little more welcoming, warmer than I would do as a lecture, the counterpart of this aspect of online teaching surprised me, because it succeeds with a lot more structure. I’ve been thinking about a recent shift to give students weekly credit for completing lecture videos and including small managerial grades and checks which I tend to avoid in face-to-face classes.” She points out that “some of what might be in this era of teaching students online how to be this kind of student requires more oversight.”

The structure allows students to create a nurturing community of practice from which she steps back from being a teacher to allow their own affective engagements to flourish. “I am consistently impressed with not only the writing that they do in their original post but also the feedback that they give each other. They have been very generous with their reading and commenting.”

Sartor closed our conversation by observing: “I have had a lot of gratifying things come from this course. I feel like I understand the students better, I feel like I have read and interacted with a tremendous amount of student writing, I didn’t always feel the same way when I taught a face to face lecture course. I tended to work more with those students who took the initiative to seek me out. It’s been exciting to follow a hundred or 200 students throughout a quarter. It has also gotten me thinking about how the online course can blur what our standards are for an effective academic presentation.” Through their webcams she sees “familiar snippets, posters in their dorm rooms.” They might be “thinking about professional goals,” but Sartor advocated for also encouraging students to “feel they are being supported in a holistic way. The conversations are a product of familiarity that an online environment can create.”