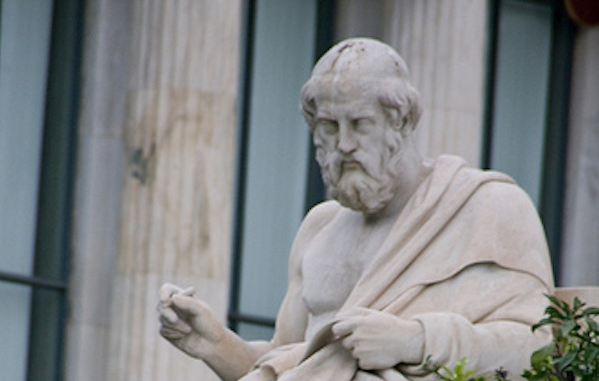 In the Phaedrus, Plato famously objected to writing, noting that it would cause a number of ills: it would lead to the decay of memory, it would deceive people into thinking that they possessed knowledge merely because they had read about it, and it was dumb – that is, it couldn’t answer questions in a dialectical format. If I read something I don’t understand or disagree with, I can’t ask the text to explain itself. It will always say what it says, forever. In general, the response of technologists has been that Plato was both right and wrong. Plato was right, in that writing has seemed to inhibit the prodigious feats of memory characteristic of oral cultures, ones which enabled the creation of works of literature like the Iliad and Odyssey. And one can certainly own and read books without understanding what’s in them:

However, few have addressed Plato’s last objection: that texts are essentially dumb, unable to respond or answer questions, no doubt because this objection seems so patently true. Yet, isn’t it possible that the dialectical inclinations of the Web, and Internet-based writing, have begun to challenge this truth?

In a short piece included in the collection, Structures of Participation in Digital Culture, Gregory Crane discusses this issue, arguing that the Internet hasn’t yet responded to Plato’s critique because the Net, Google in particular, merely “augment[s] one static document with many other static documents” (40). That is, rather than truly responding to a question, as was the ideal in Plato’s dialectic, Google simply presents the questioner with a series of texts, each as dumb as the other.

While I believe Gregory is right, in the sense that searching the Web often returns only static texts which are mute in response to our questions, to assume that there is nothing new about this situation is, I believe, to fall prey to a quite print-centric point of view regarding writing. Focusing only on the documents that are returned in a search query ignores the query itself, and the interaction between that query and the (written) algorithms and databases that determine which results are returned. We certainly have a long way to go before texts display intelligence, but we can easily say that our culture is post-Platonian, in that we have reached a point where our texts, under the right conditions, can be asked questions and deliver surprising and relevant answers in response. I’m not a fan of much of the claims in this article by Jaron Lanier, but he gets one point right about artificial intelligence: in order to make AI systems appear smart, we have to “bend over backwards” to make ourselves seem stupider than we are. I’m not going to argue that a search engine is as “smart” as a person, but acknowledging that gap doesn’t change the fact that our texts, broadly conceived, have crossed the threshold from silent to interactive.

The pinnacle of education in Plato’s time was dialectic. In our time, dialectic has largely been replaced with literacy as the end goal of education, but this literacy is frequently one-sided; how to decipher texts, not necessarily interrogate them. With the encroachment of post-Platonian texts, this situation needs to change, and it is the reason why Howard Rheingold’s work in digital literacies and crap detection (video below) is so important.

We need to reintroduce a form of dialectic into our educational process, one that is not merely oriented towards dialectical interchange between persons, but also towards the interactions students face everyday with smart texts. This digital dialectic will become increasingly important as more of our interactions – between each other and database-driven texts – are mediated by digital writing.