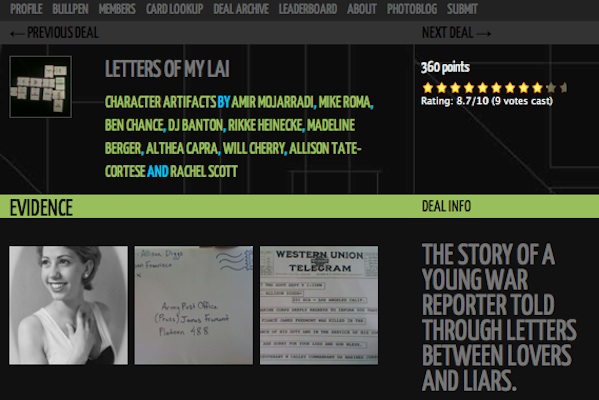 When I read Henry Jenkins’ description of the Pokemon-like card game he played with entering students at USC’s interdisciplinary Cinema School, I realized that the project Tracy Fullerton had described in September, 2011, had come to pass. Don’t think “gamification of education.” Think “turning a social icebreaker into transdisciplinary collaboration among former strangers.” Jenkins described his own encounter with the game:

A few weeks ago, I was sent a pack of collector’s cards — with my picture on them! — and asked to show up in the courtyard outside the USC Cinematic Arts facilities so that I could pass them out to students who showed up and said “convergence.” I camped out and soon small clusters of students started showing up, enthusiastically saying “convergence” and waiting for me to hand them their tokens. Very quickly, I gave out of cards and for the most part, the students did not mind. In fact, a bunch of those who arrived later hung out and started a conversation, which kept growing until at its peek I had twenty or so undergraduates sitting all around me 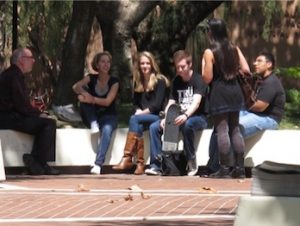 asking questions about transmedia storytelling, fan culture, new media literacies, spreadable media, and an astonishing array of other topics from my blog. This photograph was shot surreptitiously by Tracy Fullerton, one of my Cinema School colleagues, who was staking out a vantage point not far away.

The game, called “Reality, ” was described in a publication for alternate reality gamers as “transforming USC Film Students’ Freshman Year Into an Addictive Game.” I spoke with Fullerton’s advisee, Jeff Watson, a Ph.D. student who put together a team with game and experience designer Simon Wiscombe.