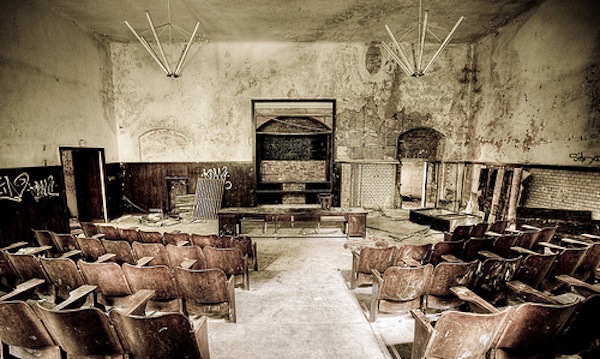 Editor’s note: We asked student blogger Chris Sinclair to examine all the discourse, content, and conversation in and around the recent TEDxNYED event on education reform, curate it, and comment on it from a student’s perspective.

If I had to identify the most consistent narrative around this event, it would be the constraints of the contemporary, lecture-centered classroom environment and how it rewards those who excel at standardized testing, not those interested in actual learning. The speakers questioned the long-standing dynamic between lecturer and student, and suggested that the era of blind memorization of facts is DOA. Jeff Jarvis even went so far as to say, “This (the lecture) is bull****”  (fittingly, of course, in lecture format).

One point many of the speakers agreed upon was the dire need for more student participation and collaboration. “In education, as in media, we must move past the one way lecture to collaboration,” (Jeff Jarvis). In Henry Jenkins’ talk about participatory culture he pointed out that student collaborations are not new. Groups of youth have been organizing to share media since the 1850s, then in the form of print [maga] “zines,” and later, in the early 1930s, through amateur radio. Thus, the idea of participatory culture and learning is not something that is new, but something that has yet to be fully embraced by the majority of society. I cannot help but agree; in my teens I participated in many online forms of collaboration, usually involved with the modification (known as “mods”) of the aesthetics of Half-Life, a popular online game. While at the time I didn’t realize the significance, I did learn a variety of skills in Photoshop and other programs I use today in a more professional arena. One tweet that especially caught my eye was from Bill Genereux, “Education is on the rickety edge of its own reformation.” While many at the conference used Twitter to amplify similar ideas about educational reform, Genereux stood out to me because he recognized that education must be reformed on “its own”; or, in other words, education must be actively reformed by educators if the innovations are to take hold.

Education today presents more opportunities than ever as participatory collaborations can now be done via the Internet for essentially zero dollars. Previously inaccessible media, such as video, can now be used cheaply and easily by educators to stimulate students. Video and other multimedia learning approaches are commonplace in the classroom of Dan Meyer, both a presenter and 8th grade mathematics teacher. In his presentation entitled, “Math Curriculum Makeover,” Meyer suggested that learning math “reasoning” and “patient problem solving” is far more important than memorizing right answers. Instead of using textbooks, which guide us to the final answer with a series of incremental questions, Meyer showed that higher-order thinking results when you give students a complex question and then teach them how to come up with incremental questions on their own. This brought to mind the famous Mark Twain quote that was continually tweeted and retweeted during the conference, “Never let schooling interfere with your education.” This quote summarizes the values Meyer presented because it forces us to think about the relationship between education and its physical context, the school. Although attending school remains essential (in my mind, at least), there still must be active participation by students and parents to make sure students are receiving a vigorous and rich education, both inside and outside of the school setting. Looking at the currently eroding state of public education in California, I cannot help but feel guilty I was lucky enough to attend public institutions that ranked in the top 5 percent of California schools.  Had I not grown up in the areas around these institutions, I believe my skills would be significantly less developed.

While other speakers such as Chris Lehmann referenced many examples of student collaborations, his tweet, “anything you teach your kids isn’t as important as teaching them to think for themselves,” accurately summarizes many of the other speakers’ sentiments.  Other highly popular tweets included: “The illiterate of the 21st century won’t be those that can’t read but those that can’t learn, unlearn, and then relearn” (Alvin Toffler) and “How can you dare think you can transform a child if you are not willing to transform yourself?” (Chris Lehmann).  Teaching youth to think independently requires that teachers “unlearn” old ways and “relearn” new ones. Breakthroughs in technology and changes in society require educators to transform not only their curriculum, but themselves as well. But, teachers may be best positioned to make that transformation. In my experience, one of the best ways to learn something is to have to teach it. This reinforces what you know, but reveals what you do not know. 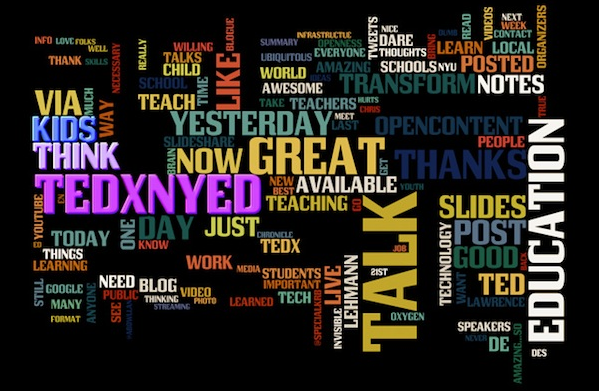 Many of the other presentations outlined more radical ways education could be improved. Jeff Jarvis denounced the “ego” of the lecturer, instead suggesting modern professors become “curators” of more prestigious lectures (such as the well-known online content from MIT). This is an interesting idea and probably a step in the right direction. But I would be concerned about a handful of uber lectures from elite universities becoming mass-adopted; it brings to mind a form of mass marketing. Although the contemporary professor could act as a curator of the strongest material, I believe it would be more appropriate for teachers to use these kinds of super lectures as tools in shaping and informing their own curricula, but not as a main focus.

Many of the conference presentations dealt with more specific examples of how the information age can benefit education and society at large. Andy Carvin showed the amazing side of Internet collaborations, outlining a student-based cartography project later used by emergency officials in Haiti to save lives. Groups of students mapped roads, hospitals, and other landmarks in a map much more detailed and user-friendly than those currently available online. Similar projects are going on around the world. Neeru Khosla spoke about the advantages of online textbooks, and how they can include alternative forms of media not found in print. Distribution would be totally revamped, and costs lowered due to the reduced need for raw materials. Personally, however, I find this shift a bit disconcerting as it means my reading will rely on an Internet connection (often a fickle thing). My own experience with online textbooks is that they can be difficult and awkward to use, but as time passes they will hopefully improve. While there were numerous insights, another central theme was the urgent need for far more probing questions and far more game-changing ideas on how to regenerate education in the new millennium – from teachers, educators, and researchers yes, but especially from students.