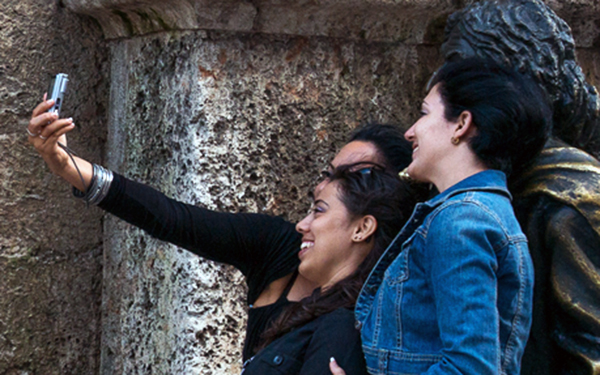 Selfies have been in the news a lot lately, particularly after the Oxford English Dictionary declared “selfie” to be the word of the year for 2013.  During the last month I have been quoted in The Washington Post, USA Today, and Politico.com about this global Internet genre. An essay of mine appeared on the new website SelfieCity, an archive of thousands of selfies from five cities around the world, so reporters eager for an expert opinion have been calling and e-mailing.

Less attention gets paid to selfies as a teaching tool, although Jill Walker Rettberg has been studying online courses that promote women’s self-worth and empowerment by shooting selfies, as she explains in this blog post. Now, the Selfies Research Network, founded by Terri Senft, is working to expand the pedagogical possibilities of the selfie and explore these instructional potentials with others in the Association of Internet Researchers.

In an interview with DML Central, Bowling Green State University selfie professor Radhika Gajjala explained her rationale for teaching with a form of composition that is often considered too trivial for serious consideration in the classroom.  “In high school and undergrad education, you go where the student is, and that’s what they are doing, whether you like it or not.”  She explained that this approach emphasizes “the learning process, community responsibility, self-presentation, and the global access of others to what they do.”

As Gajjala observed, scholars of communication have been “doing work on self-presentation for a long time now” and “studying online self-presentation — whether visually or textually — for almost two decades.”  With her college students, she emphasizes the theme of “awareness,” “like knowing which social world you are engaging with” rather than focusing on “risk and a point of view more appropriate for working with teenagers.”  She advised administrators to go beyond “panics about Facebook” and the supposed vulnerabilities of girls.  “We do this in a safe space, where we can discuss when they want to be visible and in what way.”  She cautioned those who wanted to clamp down on social media use that “young girls and boys have agency; they are exhibiting on their own terms.”

Gajjala chuckled about the fact that “undergrads are surprised to have me snap chat with them” as well, although she noted that by the time that they arrived at the Snapchat assignment, they had already learned to think differently about the authority of online sources. Like others who teach with the FemTechNet initiative, she is an advocate for “Wikistorming” in which students are encouraged to edit Wikipedia to address its shortcomings in covering issues related to feminism, women’s studies, and critical study around issues of race. “Students are surprised to be told to go to Wikipedia” and edit the content, when they’ve been steered away from the massive crowd-sourced online encyclopedia by their other teachers and not even to cite it.

In describing how she uses Snapchat as a teaching tool, Gajjala was philosophical: “My general way of doing these assignments is to see what emerges. It’s a methodology that took me a few years to get comfortable with. It’s intuitive rather than tied to assessment and accountability. It unsettles them; it also unsettles me, especially when I have voices telling me that ‘you need to tie this down with a definite rubric,’ which becomes an immediate anxiety point. After throwing Wikipedia at them, students just took me on trust.”

Students in Gajjala’s online course get a Snapchat account and then find her on Snapchat. Quickly, many students already using the service decided that they needed a separate one for class. Those new to Snapchat might encounter problems when using an iPad, which is not as portable, or might not have access to a smart phone. Gajjala helps them problem solve by emphasizing that they can observe the activities of others and that the work of the class is as much about writing as it is about “taking pictures of everything around me,” because students have to produce at least two journal entries a week and become proficient in using Google docs for collaborative writing assignments. “You have to be giving me a description of what is going on and what you are thinking about.”

The readings are substantive and range from reading geographer Dorreen Massey about place and space to studying Saskia Sassen on global cities. According to Gajjala, “students were making these very interesting connections, but the most difficult part was to convince them that this was a graded assignment. It becomes a ritual for them now; it actually draws them in, not in the abstract. They are sharing personal stories. In an online course, this is like the show and tell that we can do in the traditional classroom.”

Gajjala asserted that there also is “a strong community component” in the Snapchat assignments that was strengthened through “crowd sourcing” and sharing aspects of their daily lives. For example, “one student from Iran is curating different performative things — food, clothing, making casual pictures with odds and ends — and bringing her Islamic self in as well by showing the role of the Koran in her daily life. This is Bible belt, so students care about religious icons and benefit from an interchange of understanding and from seeing these symbols. After all, we live in symbols. We exchange them every day as global citizens, and this is a course in international communication.”

The temporality of the sharing is obviously different from many more conventional kinds of exchanges, but it also leads to a strong sense of heighted occasion, particularly now that students can post to the MyStory section of Snapchat. Gajjala recounted how she met one of her students “at an awards ceremony, and we exchanged snapchats.”

She warned researchers not to assume that her experience represents “the truth of how Snapchat is being used by youth; they are not going to use Snapchat as they would be doing otherwise. This is about how we segregate, not images of themselves drinking and other things they don’t want me to see.” With a number of nontraditional students and students who might be more mature, she also sees a different segment of the undergraduate population. For example, one of her students “is in a workplace most of the day; he is one of the best students in the class, a pedagogical leader. This is a communication class, so they are also trying to think about how this kind of communication might be useful to them in a workplace framework.”

Because the pictures vanish by design on Snapchat, many of Gajjala’s colleagues have fretted about how academic records will be kept.  “’How are you going to grade it? You can’t save it!’  But I am making sure that they are journaling; I see their learning process.  When you are teaching online classes, it is important to build in local authenticity in personal practice.  Of course, teaching online there is no way that I can guarantee that they are doing it themselves, but this way they have to explain how they did it, which is hard to fake.” In the past, when she taught “using MOOs and MUDs, they were interacting with what I built and had to record their impressions of what it felt like when this or that happened.”  Even if there is “no guarantee that it’s the student who is taking this class, the person who is doing all this is learning.  This helps them to understand their own subject position. Some people used to blow it off with something pro forma, but then they would realize that others had deep experience, and they had to come to terms with their own gaps in knowledge and adopt a kind of accountability.”