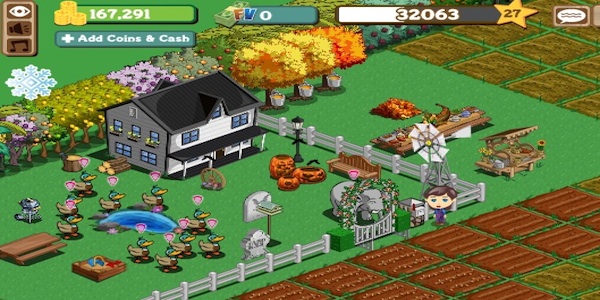 A recent post from Inside Facebook has shown that Facebook is growing fast in Latin America, and a large part of this growth is happening in Brazil (33 percent each month, according to the same set of data). Interestingly, other news pieces about research from institutes such as Ibope (link is in Portuguese) have also shown that social games are increasingly popular in the country, especially among young adults. One hypothesis researchers here have is that Facebook growth has spiked partially because of the burgeoning popularity of the social network’s apps, especially the games.

Social games in Facebook are usually casual games in the sense that they allow users to play intermittently, not requiring too much of a time investment; and they are social because they allow users to compete against themselves and others so they can interact with their networks. This type of game is not only directed to leisure, but also to sharing, creating and maintaining social ties. Three games are strikingly popular for Facebook Brazilian users: FarmVille, Mafia Wars and Café World. In FarmVille, users are required to create and maintain a farm. Although the focus is in leveling up and acquiring a variety of  buildings and seeds to plant, part of the game is strongly connected to exchanging gifts and making moves within your social network. Mafia Wars is more of a role-playing game, where the user is supposed to create a character and tries to improve by gaining power, properties and money within her/his “mafia.” Although the game doesn’t incorporate that many social tools, the communities that emerge around it are strong motivations for groups to maintain ties and to keep the fun going. Cafe World gives users the opportunity to own and operate an online cafe and attract as many “customers” as possible. 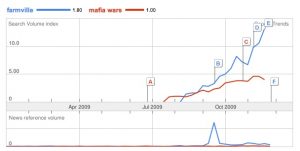 Since we are currently carrying out research on Social Games and Social Networks in Brazil at my university (in Portuguese), we decided to investigate more about this phenomenon. We’ve conducted several surveys and interviews. While the study is not yet finished nor published, the first survey — with 250 Brazilian Internet users 18 to 35 years old — provided some interesting findings. Twenty-six percent of users who joined Facebook in the last year tended to point to the apps as one of their strongest motivations. Another 30 percent cited the fact that their friends had joined Facebook as the inspiration for their own decision to adopt Facebook.  Also, nearly nine out of users (86 percent) from the same sample indicated that games are their favorite thing to do on Facebook and a strong motivation to keep coming back. In fact, games such as Farmville and Mafia Wars have become more and more popular among Internet users overall, driving traffic for Facebook as Brazilians start new behaviors as casual gamers. The data from Ibope has shown that Farmville alone has 35 percent of the Facebook audience in the country, while Mafia Wars has 26 percent. Also, data retrieved from Twitter points to the fact that users are talking more about social games, and thus, helping spread their popularity among social networks. Although we can’t yet draw conclusions from this small body of evidence, the implication may be that casual games can become an important motivation for young users not only to join social network sites, but also to keep using them, and to increasingly embrace the Internet. 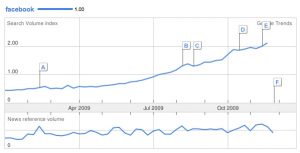 Of course, Facebook is still a minor social network site in Brazil, with less than 10 percent of the users Orkut has. However, it is interesting that it is growing steadily and that social games are being strongly accepted, perhaps creating a new niche for other types of social networks.