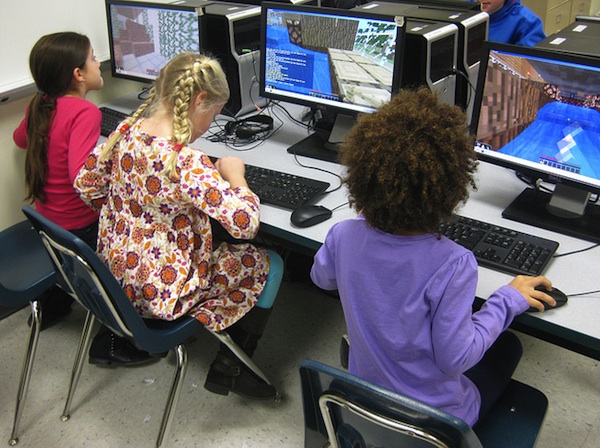 Playing with blocks certainly predates constructionist theories of learning by playing with “tangible manipulatives,” but the culturally universal practice is probably as old as human social learning. What is new is the ability to use simulated blocks to teach comparative religion by enabling students to construct navigable models of famous houses of worship. Or explore biology by assembling giant DNA molecules, or manifest millions of blocks by performing the proper calculations and applying appropriate logical operations. Manipulatives aren’t containers of knowledge, but can be used as “objects to think with,” as Seymour Papert noted more than thirty years ago – inexpensive, abundant, available, safe components that even a young child can control, adjust, build with, and above all, experiment and hypothesize with. Just as blocks have no inherent curricular power other than experience in making big things by stacking smaller things in the right order, the ability of computer-controlled pixels to convey important knowledge depends entirely on what (and how) they are used. That’s where teachers come in…and why some are beginning to use an inexpensive online game to teach everything from philosophy to biology: Minecraft.

If you didn’t know what it is about, you might – as I did – conflate the popular “sandbox” game “Minecraft” with the popular online adventure game, “World of Warcraft.” Within the last year, however, my radar started picking up signals from educators who were introducing Minecraft to their students. I’m taking a MOOC on programming in the Python language, and when the instructor (Professor Joe Warren from Rice University) said, “If there is one game I could recommend that could get you into the frame of mind of computer programming, it’s Minecraft,” my antennae started quivering. Following my usual learning method of nosing around, stumbling into and over things, then inquiring into those stumbled-upon phenomena that awakened my curiosity, a quick search led to Minecraft’s website, where I learned that Minecraft is about building stuff – a “sandbox” in which the object of the game is up to each player. Yes, you can raise protective structures and create armor to protect against the monster hordes. You can also build a city, a factory, a molecule, a temple, a playground. Players dig up dirt, stone, and wood, combine these basic materials to make swords and microscopes and build castles, rollercoasters, spaceships, Parthenons, planets.

Players can fight monsters, but nothing in the environment compels any one kind of play. Those who don’t want to be warriors can be architects, engineers, navigators, scientists, playwrites, community-builders. Creating an elaborate environment is only the beginning – then you need to attract others to come socialize in your world. Like a physical sandbox, a Minecraft server can (but doesn’t have to be) a social environment as well as a laboratory for individual exploration.

Some of the first signals I detected came from my friends at Ryerson University’s Edgelab. Edgelab researcher Melanie McBride is enthusiastic about Minecraft’s potential to empower autonomous learning where students seek out teachers, texts, and peers to solve the mathematical problems necessary to turn a blueprint into a three dimensional object, to perform the historical research necessary to make a simulation of a Mayan temple or Greek theater look authentic. She also warned me that with autonomy (i.e., the students are free to choose how to act and are not following explicit instructions) and a social arena, the same problems that can arise in any youth environment are possible – bullying, cliques, “griefing” (deliberate destruction and/or mockery of the work of others).

“Because Minecraft allows folks to have their own servers (like having one’s own blog or Ning perhaps) there is the sense of entitlement to an audience,” McBride told me. “The attitude is ‘If I make it, others will play.’ This of course is not always or even often the case. The very ingenious or already socially savvy are able to amass a following without the knowledge or social skills or literacies or time or energy to make a community work. So you have a lot of kids moving from server to server until they find one that is ‘popular’…unfortunately, in a kid-run server culture, popular doesn’t mean inclusive. And many of these servers harbor trolls and bullies. So when the kids come to a well-governed server it’s a shock. People are nice and the grown ups don’t allow them to bully. It’s a safe space – though it’s not always a ‘popular’ space.” In other words, not only does Minecraft work best when teachers set boundaries, model behavior, pose challenges, answer questions – and let the students work out the rest – it can also go south in the absence of explicitly stated behavioral norms and expectations.

Melanie introduced me to Liam O’Donnell, a Toronto educator who has been initiating other teachers as well as students into the educational potential of Minecraft. He hosts Gamingedus, a wiki for Minecraft-using educators and a Multi-school Server for four different Toronto area schools, educators, and students. In our brief video interview, O’Donnell and I talk about “messy learning” and more. (In the next part of this series, I will talk with an elementary school teacher in Southern California whose students have built elaborate models of famous places of worship for the world’s major religions).