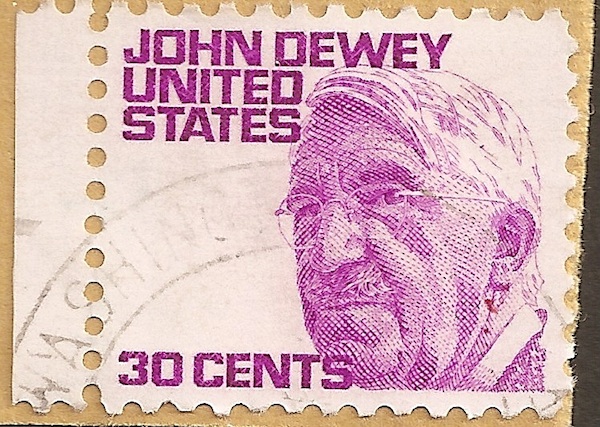 At the beginning of 2013 the Mozilla Foundation announced its intention to work with the community to create a new learning standard for Web Literacy. I’m delighted to say that we’re well on course to release v1.0 of that standard at the Mozilla Festival in London at the end of October. In this post I want to give an overview of how I went from being initially skeptical to an enthusiastic project lead – all because of something I learned about ontology from Clay Shirky.

If it’s impossible to create a completely coherent categorization, even when you’re doing something as physically related to essence as chemistry, imagine the problems faced by anyone who’s dealing with a domain where essence is even less obvious.
(Clay Shirky, ‘Ontology is Overrated‘)

In my doctoral thesis (2012) I spent tens of thousands of words trying to answer the question What is digital literacy? Here’s my answer after surveying and analysing the landscape for a few years:

My short answer to such a question would be that it is a ‘convenient hypocrisy’. By this I mean that it is a term used ambiguously (both consciously and unconsciously) by people with multitude of different backgrounds and intentions. However, given that it is a term that has entered common parlance, I would hope that this thesis clarifies at least three things. First of all, I have argued that speaking of a plurality of ‘digital literacies’ makes more sense than endless attempts to define ‘one literacy to rule them all’. Secondly, I have suggested the essential elements that should make up any contextualised and emergent definition of digital literacies. Finally, I have attempted to argue that the process of coming up with a definition of what constitutes ‘digital literacies’ is at least as important as the outcome of that process.

I joined the Mozilla Foundation shortly after completing my thesis and started work on a ‘Web Literacies framework’ to underpin our Webmaker initiative. When I was asked to consider turning this framework into a ‘Web Literacy Standard’ I wasn’t sure what to do. In my work I’d talked specifically about the importance of considering a plurality of ‘literacies’ and argued against ‘one definition to rule them all’. And then, of course, there was the word ‘Standard’.

In the UK (where I’ve lived my whole life), the thing that comes most easily to mind when the term ‘Standard’ is used is the British Standards. These are industry-driven and focused upon quality. Other Standards with which I’m reasonably familiar are Web standards, “formal, non-proprietary standards and other technical specifications that define and describe aspects of the World Wide Web.” The problem is that the word ‘Standard’ does not have such a positive connotation in other territories and cultures – even those that share the English language. For example, the Common Core State Standards Initiative in the US (usually referred to simply as ‘Common Core’) tends to be used as an example of a top-down, one-size-fits-all approach.

Surely practices relating to the Web are changing so often that they can’t be categorised in a formal way? Clay Shirky would seem to be doubtful:

Now, anyone who deals with categorization for a living will tell you they can never get a perfect system. In working classification systems, success is not “Did we get the ideal arrangement?” but rather “How close did we come, and on what measures?” The idea of a perfect scheme is simply a Platonic ideal. However, I want to argue that even the ontological ideal is a mistake. Even using theoretical perfection as a measure of practical success leads to misapplication of resources.
(Shirky, ‘Ontology…’)

The important thing here is that we – Mozilla and the community – are creating a map of the territory. There may be others and we don’t pretend we’re not making judgements. We hope it’s “useful in the way of belief” (as William James would put it) but realise that there are other ways to understand and represent the skills and competencies required to read, write and participate on the Web. So, happily, there’s no need to subscribe to Plato’s Theory of Forms to accept the Web Literacy Standard as A Good Idea.

For all its top-downness, there is one thing that the Common Core has got going for it. That is a website with a unique URL for each part of every standard. As Shirky points out, this is significant:

Now imagine a world where everything can have a unique identifier. This should be easy, since that’s the world we currently live in – the URL gives us a way to create a globally unique ID for anything we need to point to.
[…]

And once you can do that, anyone can label those pointers, can tag those URLs, in ways that make them more valuable, and all without requiring top-down organization schemes. And this – an explosion in free-form labeling of links, followed by all sorts of ways of grabbing value from those labels – is what I think is happening now.
(Shirky, ‘Ontology…’) 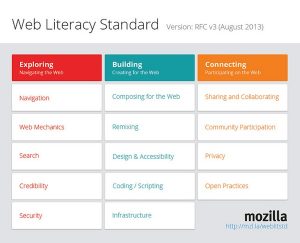 We’re defining the skills and competencies in terms of verbs rather than nouns – in other words, focusing on ability to actually do something rather than just know how to do it. And although we started off with distinct skill levels in mind (‘Beginner’ and ‘Intermediate’) we’re not now prescribing the level for learning activities at all. Those aligning with the Web Literacy Standard are free to do so in any way they think meets a particular skill or competency, and at any level. This is a descriptive learning standard, not a prescriptive one.

Ultimately, as I explained in an earlier DMLcentral post on why organisations large and small should align with the Web Literacy Standard we’d like people to use Open Badges to align. To a great extent this mitigates a lot of Shirky’s criticisms of those seeking to create a ‘perfect’ classification system of anything related to the Web. The Open Badges ecosystem is an emergent system of value – and those badged learning activities that align with the Web Literacy Standard will be part of it. The beauty is that as the Web evolves so the Standard (and the learning activities that align) will evolve with it.

The landing page for the Web Literacy Standard can be found at http://mzl.la/weblitstd. By the time we reach v1.0 at the end of October, the Standard will reside at webmaker.org.