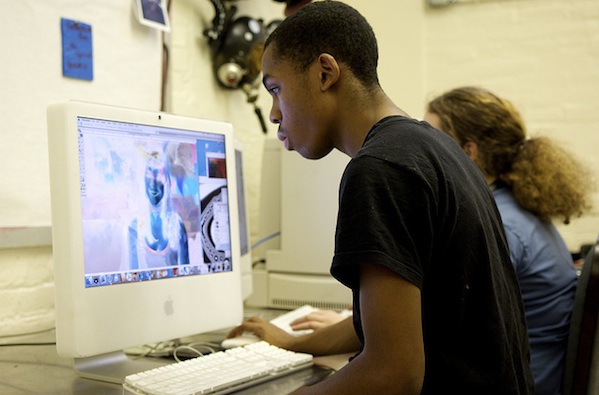 Classes recently began in the Los Angeles Unified School District, which is the second largest school district in the country, a place where the best practices of digital media and learning face the difficulties of effecting change at a truly massive scale.  This post serves as a challenge to philanthropic organizations, which often focus on boutique programs with younger children when aiming to reform K-12 education, and suggests that there is a vast pool of motivated digital learners who are currently underserved.

I don’t tend to talk about my personal life as a DMLcentral blogger, but I am married to an educator in the state’s Regional Occupational Program, where thousands of young people are trained in subjects such as “Digital Imaging” and “Web Design” to become part of the state’s workforce in important economic sectors dominated by film studios, video game developers and publishers, and advertising firms.  These students are expected to graduate with proficiency in powerful commercial software packages, such as the Adobe Creative Suite, and to be prepared for even more complex modeling, compositing, programming, and design tasks.  Like many of his fellow ROP teachers, my husband was recruited out of industry; you have almost certainly seen his work as an art director.

The conventional wisdom about vocational education as warehousing has proved to be untrue in his experience.  Vocational instructors are part of the collegial environment of his school, and their learning objectives are often part of larger curricular discussions about linked learning and the Common Core.  The students also are hopeful about the possibilities for success in visual literacy fields where the barriers that hold them back as non-native speakers of English don’t seem as insurmountable.

Nonetheless, what it is like to teach in one of these classrooms is very different from his previous experiences teaching in a college lab like the one I teach in, where privileged classes of students all have access to fully functioning computers and the support for software and networking resources to allow them to turn in large rich media files as part of a seamless workflow.

By stepping into a position left vacant mid-year by several former teachers, he inherited cryptic notes about the lab’s functionality, CPUs left on their sides during floor polishing, and workstations with missing keyboards.  He made new friends as he scavenged for parts, but his responsibilities as a system administrator were frustrated by the absence of a systematic inventory of passwords.  Opening cabinets he would sometime have his hopes raised by uncovering boxes that seemed to contain missing licensed software, only to have them dashed again with illegible serial numbers or absent installation disks.

Not only does he not have enough software for hands-on learning, the layout of the classroom puts the teacher’s workstation at the head of the class where he can’t see over students’ shoulders to support their progress.  The images of his lessons are projected onto an area that students can’t see over their screens.

He remains optimistic as the year begins about the creative potential of his students, and he does not want to see them disenfranchised by their status as English language learners.  Even the IT Support Desk appears to be less inaccessible to those in need.

I hope to share more progress reports as the year progresses.