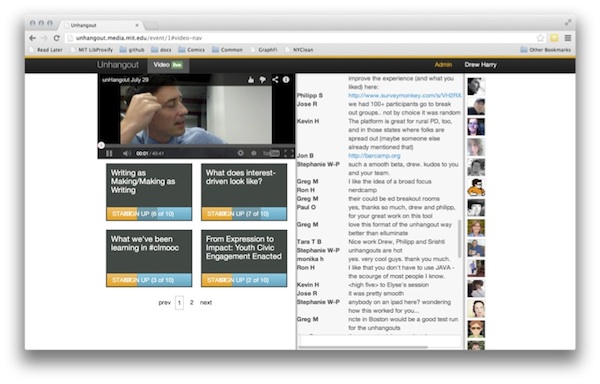 Computers and the Internet are really good at copying information and sending it to lots of people at low cost. That’s why many of the recent innovations in online learning focus on packaging knowledge in the form of short video lectures, and sharing them online. Khan Academy and the recent spate of Massive Open Online Courses (MOOCs) are successful examples. They take the traditional model of instruction (sage on the stage) and scale it to vast audiences.

But there is another approach to learning, that turns around the top-down model of instruction, and places the learner at the center. It encourages students to explore their passions, and band together with others to tackle problems they care about. In my work at P2PU and the MIT Media Lab, I am interested in these social aspects of learning. And how technology supports new ways of learning with others.

With support from the MacArthur Foundation, Drew Harry, Srishti Sethi and I have been working on something we call Unhangouts during the last few months. The original idea was to replicate the magic that happens at physical unconferences, where the agenda is not fixed, but participants can add sessions or float between different rooms. We built an open source platform that leverages Google Hangouts to host similar events online. Another way to think about it is as a classroom with an infinite number of breakout sessions. You can create all the rooms ahead of time, or let participants add more rooms on the fly.

Users arrive in a lobby, where they can see who else is there, and chat with each other. If the hosts offer a video broadcast, it will be screened in the lobby. Participants then break out into smaller sessions (up to 10 people per session) where in-depth conversations, peer-to-peer learning, and collaboration on projects take place. Unhangouts are community-based learning instead of top-down information transfer.

The Media Lab way of developing new technologies is to test and iterate fast. We built a first version (I’m hesitant to call it a beta) and found some awesome partners, who shared our passion for tinkering with technology, and were fearless when it came to wrangling new tools into submission: the National Writing Project (NWP), the ConnectedLearning.tv team, and the Digital Media and Learning Research Hub. A lot of credit for the successful first test goes to them.

We scheduled the first ever Unhangout at the end of the monthlong “Writers at Work” seminar series, that was hosted on CL.tv. NWP recruited a handful of session hosts and we announced the event through the CL.tv mailing list and our various twitter networks.

Overall, the experience was fun, we learned a lot, and the participants liked it, too.

“I really dig this platform and the ability to build the breakouts.  I can see some great ways to use this in schools/outside of schools for professional development”

We did a mini survey (10 responses, about ⅓ of all participants) and 80% of respondents ranked the conversations in their hangouts as the most useful part of the event (the lobby broadcast was a distant second, and lobby chat came last).

One of the results we are happiest about was that of those, who joined a hangout, almost all said they actively participated (listened and spoke). That is exactly the kind of engaged learning we were hoping to support.

And 10 out of 10 respondents said they would recommend a similar event to their friends and colleagues. Bingo!

We also learned a lot about how to improve things. One of the features we are working on now will make it easier for hosts to see how many participants are in each hangout, and send messages to everyone (for example, to invite them back into the lobby).

Moving forward, we have big plans for Unhangouts and a few concrete pilots in the pipeline. One of the partners we are most excited about is the HOMAGO project (initiated out of the DML Research Hub at the UC Humanities Research Institute). We are speaking to them about ways that Unhangouts could support interested-driven teen learners. Also, a first virtual unConference for connected learning educators is on the horizon for sometime later this year or early 2014. And we are speaking with TEDxBeaconStreet to build social learning around their collection of presentations. TEDx speakers would host intimate conversations about their presentations, and invite participants to add their voice (rather than be dazzled in the dark, which is how I would describe the typical audience experience at TED).