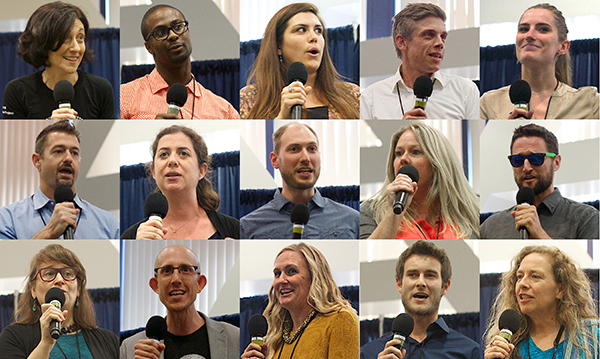 Fifteen inspiring speakers took the stage Oct. 6 and 7 during the 7th annual Digital Media and Learning Conference at the University of California, Irvine. With 20 slides and 5 minutes each, they delivered some powerful talks, enlightening conference-goers about the DML projects that fuel their passions. The following are excerpts from the speakers and videos of their full Ignite presentations.

“Well, this is a story about how my teaching got flipped, turned upside down…. In So California, born and raised, watching TV is how I spent most of my days, vegging out, slacking, chillaxing all cool. When I turned on the TV right after my school, my pops got mad, thought I was up to no good, ‘turn it off, read your book, do your brain some good.’ I said, ‘yo, dad, I’m down to read, but all my favorite stories are told on TV. Fresh Prince of Bel-Air was my No. 1 show.’… That was exposition, next to rising action. I was starting to learn that plot stages were happening, so you know the tale that I’m telling in rhyme. I’m a quote Will Smith for the next few lines.” — Nick Ross, middle and high school English teacher

“I believe in something called inclusive design…. Very often, students with disabilities, especially cognitive disabilities, are not asked about what they need so, I wanted to ask them. I wanted to have them create empathy maps.” — Rhianon Gutierrez, Boston public schools media artist

“As game designers, we believe that taking creative license and game mechanics, you can really enhance scientific learning in kids…. We don’t want scientific accuracy but boring nor do we want something that’s really visually appealing but is kind of scientifically misleading and that would be counterproductive, so how do we go about and try to reconcile these two and figure out what we’re doing?” — Peter McPartlan, UCI doctoral student

“Learning scholars have lots to say about the role of play on meaning-making…. Play is how we modify new information to make sense of our world.” — Jason Engerman, Penn State University

“Public higher education in the U.S. is dying on our watch. We are increasingly funding with revenues that come from private enterprise and on the backs of our debt-ridden students, so I want to make an argument that we have to make a case for public funding for higher education and I want to suggest that we do that using the philosophies of open education.” — Robin DeRosa, professor of interdisciplinary studies at Plymouth State University

“Looking at me, you wouldn’t know that I have Crohn’s Disease. I had to grow up through my teenage years dealing with that, and I didn’t feel that anybody could ever empathize with me. I felt alone, completely isolated, but thanks to the affordances of social media, it means that we don’t have to be so alone anymore. Thousands of people now come online and we come into communities and we can share our stories and learn together.” — Kate Green, University of Nottingham doctoral student

“Let’s talk about knowledge. Let’s talk about how knowledge is constructed and how it’s contested.” — Remi Kalir, assistant professor of information and learning technologies at the University of Colorado, Denver

“I submit that improvising with your students can help you to create the culture and to practice the processes that facilitate 21st century learning…. Education is not the filling of a pail. It is the lighting of a fire.” — Laurel Felt, lecturer in communication at USC

“Why technology in parks? Because parks is about fun. Parks is about play, and why not digital learning as play?” — Ana Maria Campos, director of computer resource centers for New York City

“Career exploration should be about following your interests instead of trying to retrofit yourself into a career. So, then, how do you become that thing? You have to take active steps in order to fulfill your dreams.”— Annie Mais, Roadtrip Nation curriculum product manager

“Integrating refugees into higher education in Germany is not an easy task. There’s no one-size-fits-all solution to this, but bureaucracy and the system itself is trying to do just that.” — Christian Friedrich, Hamburg University and Leuphana University

“eSports is sexy right now…. Riot Games just announced that 100 million people are now playing League of Legends every month. That’s over 1% of the human population plays one game…. eSports is the information revolution’s answer to traditional athletics. It’s the next evolution of competition.”— Mark Deppe, acting director of UCI eSports

“How do we grow as civic actors through our uses of technology and media? Not only that, but how are we actually designing these tools and who are those designers and what are the values that they hold?” — Erhardt Graeff, researcher at MIT Media Lab

“Once these underserved kids in San Leandro get a taste of the experience, they start soaring.” — Bridget McGraw, mighty operations manager at Pilot City