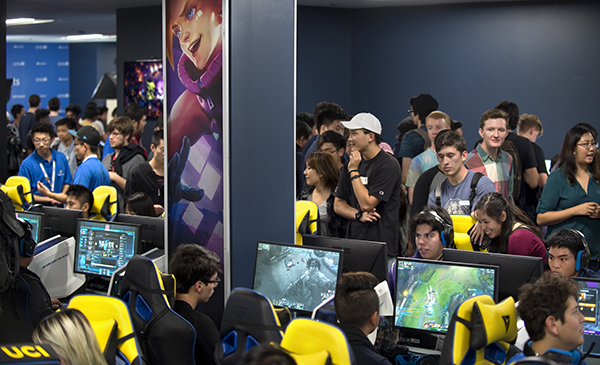 Now that the University of California, Irvine has opened the first eSports arena of its kind at a public college, student-gamers soon will be doing battle against the enemy Lexus in “League of Legends” tournaments under big screens to cheering fans.

The new 3,500-square-foot arena is outfitted with 80 custom gaming PCs, luxurious ergonomic chairs and a webcasting studio that will broadcast matches. Home to UCI’s elite new “League of Legends” team, the arena also will host summer camps and other special events, and is available to anyone who wants to play for recreation for about $4 per hour.

Some of the best “League of Legends” players in the world applied to be part of UCI’s inaugural team and five, who met the university’s admissions requirements, were selected and awarded partial scholarships. Five more will be selected later this fall, said Mark Deppe, acting director of UCI eSports.

The campus is ideal for the arena as UCI already has a stellar reputation for its academic programs in computer science and computer game science. And, researchers have found that games can have positive impacts in academics and society.

“The world of eSports creates many of the same benefits for participants as traditional sports,” Deppe said. It “promotes teamwork, problem solving, communication, critical thinking, tenacity, memory and many other positive things. It is new and, like with any new idea, you’ll have early adopters who buy in quickly and other people who will come along more slowly. I still know smart, tech-savvy, people who don’t have facebook accounts.”

Deppe will deliver an Ignite talk about how eSports is a grass-root creation of the gaming community at this week’s Digital Media and Learning Conference.

“There’s a lot of speculation about how collegiate esports will evolve and what groups will emerge to regulate them,” Deppe said. “No CEO or governing body determines which games become popular eSports spectacles, which is how the NCAA operates — top down. The NCAA don’t have a role to play in eSports as the gamers decide what games are popular and the game developers control competitions, rules, eligibility, distribution, etc. Any rules for collegiate eSports will come from the collective wisdom of schools, publishers and the gaming community.”

Deppe added that eSports “are the future of competition,” and “UCI, now with the best eSports program in the world, will be the Duke basketball of the future.”