The recent launch of Google+, a new social network, has caused ripples in many different online spaces. From talk of it being a ‘Facebook killer’ because of its enhanced privacy settings to discussion of who one should place in the various ‘Circles’ available to users, the focus has been on technical aspects of the new service. What interests me, however, is how using the lens of digital literacies can cast light on practices and interactions in these spheres.

There are two graphs ingrained in the brains of most people interested in technology and its effects on society. The first is the technology adoption lifecycle:

…and the second is the ‘hype cycle’: 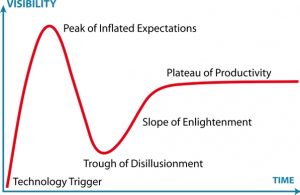 These, it is assumed, explain how users interact with technologies. With the former, there is a clearly-definable group of ‘innovators’ and ‘early adopters’ with a later mainstream who are eventually followed by ‘laggards’. The hype cycle, on the other hand, is focused on the buzz around a technology trigger such as Apple’s iPad or a new social network such as Google+. The buzz causes a frenzy of excitement and ‘peak of inflated expectations’ that quickly collapses into a ‘trough of disillusionment’. Eventually, the ‘slope of enlightenment’ leads to a ‘plateau of productivity’ where the (now not-so) new technology is used in interesting and socially-useful ways.

While far too simplistic to withstand rigorous testing, they do serve as convenient hypocrisies to help explain what happens when new technological tools come along. What’s interested me about the launch of Google+ is that, as with Twitter in the early days, it’s effectively a flexible ‘affinity space’ for those interested in technology in addition to their own specialism. For the people I know online, that’s educational technology. Google+ in my world is currently an edtech niche.

The interactions taking place since the launch of Google+ have been predicated upon those that previously took place on Twitter. These, in turn, were an outgrowth of the only way to have a meaningful edtech-focused social network pre-2007: commenting on other people’s blogs. Although the overall numbers involved have grown, there is a surprisingly large core of people (the ‘innovators’ according to the technology adoption lifecycle) who do the job of figuring out how to use the technology. They explore the niches. Sometimes this can simply be figuring out ‘best practices’ but occasionally can lead to the widespread adoption of functional extensions to the core offerings – such as retweeting and #hashtagging on Twitter.

There is, then, a particular habitas upon which new interactions are predicated – a layer of custom and meaning and ways of approaching technology-mediated spaces. Despite there being no limit on words, for example, many early posts to Google+ seemed voluntarily restricted to 140 characters. This practice has changed over the last few days as the innovators and early adopters play with and discuss the technology. By the time the mainstream come along, there are guidelines and ways of interacting that have already been established. This can be a good thing as it means that the mainstream can ‘hit the ground running’.

There can, however, be problems in presenting tools with baked-in habitas as people naturally begin to think in ways constrained by the tools they use. If you’ve got a hammer you go looking for a nail; these ways of thinking can often be liberating and restrictive in equal measure. We use metaphor to understand new spaces and ways of interacting, a kind of conceptual shorthand to deal with what could otherwise be an overwhelming experience. The upshot of early adopters being, by definition, the first users of technology or a service is that they affect the ways in which others view the tools. For example, introducing Twitter through the metaphor of the ‘largest café in the world’ leads to different user outcomes and perceptions than introducing it as just another marketing channel. An initially-skewed user base can lead to skewed epistemologies and practices in the longer-term.

Literacy is a Social Quest

None of this would be problematic if there was one way to be literate, one way to ‘be’ in the world. But, of course, we know that literacy is a multi-faceted and inherently social (rather than an individual and psychological) pursuit. Diversity matters. If the tools with which we ‘read’ and ‘write’ in digital spaces have been mediated by those going before us, that can affect how the those in the mainstream think and act. If an important part of our identity can be shaped by these tools, then the structure of social networks (and especially emergent ones such as Google+) should matter to us. Technology is never neutral. It is not only made by human beings for a purpose but co-created by innovators and early adopters who have their own biases. Part of being digitally literate means being able to reflect on that and either accept it (as they are part of your tribe) or co-construct an alternative way of being.

So what do new social networks tell us about digital literacies? They tell us that being digitally literate is about co-construction and identity. They tell us that the practices of early adopters with even the most ‘blank slate’ and seemingly-neutral of technologies can shape ways of thinking for the mainstream. And, perhaps most importantly, they tell us that literacy is inherently a social activity.