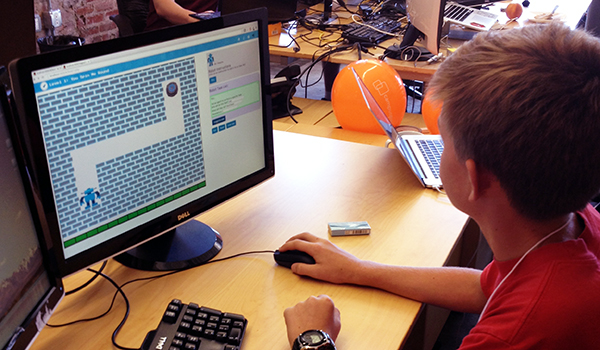 It’s 6:30 Sunday morning and the loft-like space that houses the educational software company Difference Engine echoes the metronome like taps of a ping pong ball flying across the table. 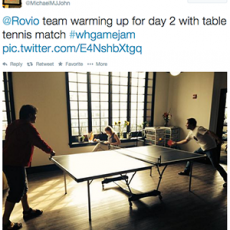 It’s not clear how much the Rovio team members (the trio from Finland that were partly responsible for unleashing Angry Birds upon the world) have slept, but their energy has yet to slow as they move steadily into hour 20 of intense programming. This is what happens when you throw a bunch of game developers and educators in a room and encourage them to make better, amazing games for learning.

Over the course of 48 hours, handfuls of videogame developers gathered in D.C. to take on the challenge of developing powerful, educational games against a ticking clock. The Educational Game Jam, organized by The White House Office of Science and Technology Policy and the U.S. Department of Education Office of Educational Technology, was an intense experience and we saw an impressive amount of creativity being distilled into eye-catching graphics, innovative gameplay, and unique learning environments. The event brought more than 20 teams of developers ranging from top tier companies like Sony and Ubisoft to indie developers and college students.

Armed with laptops, nestled amongst myriad whiteboards, and popping cans of energy drinks on a regular basis, the teams met with educators who shared insights into how games could align with college and career-ready standards to engage students in learning.

After opening remarks from Nick Sinai, White House Deputy Chief Technology Officer, and Mark DeLoura, Senior Advisor for Digital Media at the White House Office of Science and Technology Policy, teams of developers quickly dispersed to brainstorm on post-its, white boards, and Google docs. Everyone felt the time crunch. The programmers invited to the game jam had a singular, herculean goal of getting a playable prototype off the ground and presentable by Monday morning. A working version of their game essentially acting as their ticket into the White House, the stakes felt high throughout the weekend.

Impressively, eight hours after the game jam had launched, nearly every group had at least a rudimentary and operational version of their game to work upon. Further, by Sunday, a group of playtesters — including students from the Hirshorn ARTLAB+ visited the jammers and gave crucial feedback with less than 24 hours before presentation time.

Throughout the game jam, experienced teachers and members of the U.S. Department of Education worked closely with developers, asking them prodding questions about their design and the roles the students can take within their games.

While games are (and should be!) fun, the imperative for them to be educationally sound could not feel more important.

Reflecting on the game jam and the role video games can play in education, teacher Chad Sansing wrote, “I think we live and teach in a time when we need to return to fun and games at school. We need to return to playful learning.” Like the other educators present, Sansing was asked to advise at the game jam based on his expertise as an educator and his experience using games in his own classroom. Later in the same post, Sansing notes, “The more we explore video games as a teaching tool, the more opportunities we’ll see to match kids and content with them the same way we work to match kids and content with traditional texts or video.”

While the weekend was about making learning fun, Sansing reminds us that this is important, serious work. Looking at the powerful gaming prototypes that were presented, we are inspired by the potential that comes to fruition when developers and educators work collaboratively for the sake of our students. The games we saw included algebraic-shooting spaceships, a platform for students to take on historic identities during World War I, and the possibilities of creating a vicious wolf shark by managing environmental conditions. 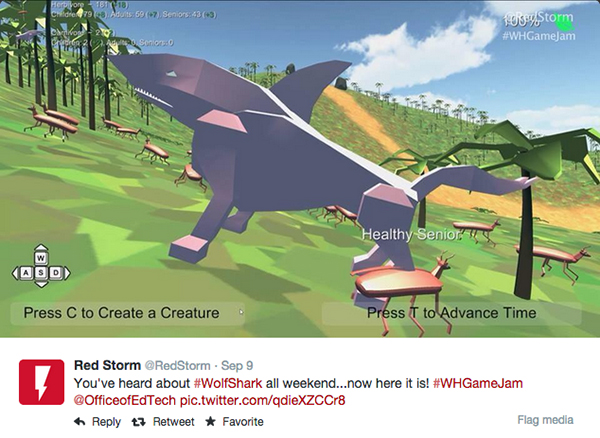 We hope this marks the start of a broader national movement to use technology to make learning fun. The need for engaging learning opportunities that empower students and teachers alike could not be more prescient. And, with increased technology in schools made possible through the ConnectED Initiative, the opportunity to do so has never been more real.