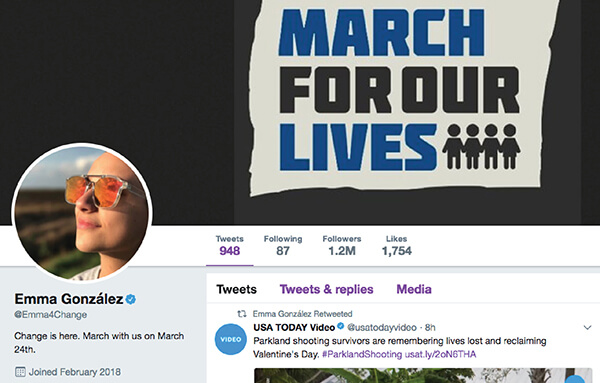 Emma González, a high school student from Parkland, now has more Twitter followers than the NRA. Indeed, numerous students from Marjory Stoneman Douglas High School have turned the social media skills and practices they use every day into tools that enable political impact. While their traumatic experience is tragically extreme, their example sheds light on a more general process: When digital skills and social networks are joined with a motivation to effect change, they become potent political resources.

Our study of youth social media practices and politics indicates that this dynamic is more common and more consequential than many suspect. In 2015, the Pew Research Center found that 92 percent of teens ages 13-17 go online every day; fully 24 percent, or almost a quarter, say they’re online almost constantly. Most of this online activity is not political, of course. But, even when not political, online engagement appears to be politically consequential.

Why might this be? Scholars have found that civic skills are an essential resource for individuals. They facilitate civic engagement. For example, skills developed when creating a video, remixing content, or starting a Facebook group, can also be employed when blogging and circulating political news, starting a new political group, or mobilizing one’s social network on behalf of a cause.

We wanted to test these competing possibilities. And, we were able to do so by using the Youth and Participatory Politics survey — a survey developed in partnership with Professor Cathy Cohen of the University of Chicago. The YPP survey is particularly well suited for this kind of study because it is nationally representative and contains data on the same young people in both 2013 and 2015. Thus, we could examine whether experiences online in 2013 influenced political participation in 2015 while controlling for prior characteristics and behaviors.  The full study is described in a paper we recently published in Political Communication. Our findings demonstrate the influence of online activity for political engagement and offer some insight into why it is impactful.  Specifically:

Similar to the Parkland students, the examples of Black Lives Matter and the Dreamers show that digital skills and online social networks provide a platform that allows young people’s demands for social and political change to be heard. In short, far from distracting youth from political life, engagement of young people in online participatory communities seems more often to build pathways that increase political participation.