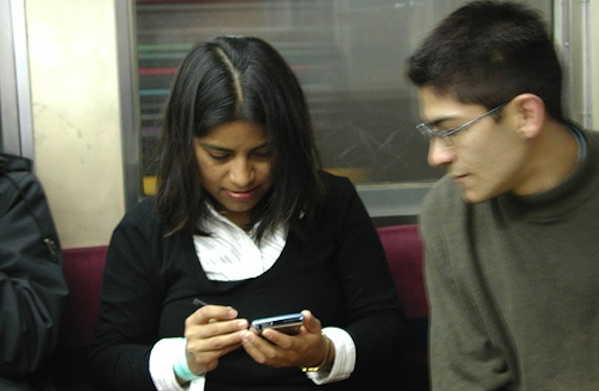 Digital media and learning initiatives often talk in utopian terms about a “future without books,” but don’t say that to New School faculty member Trebor Scholz.  Scholz, who teaches in the Department of Culture and Media, has had great success with making a book the final project turned in by students at the end of his new media courses.  Instead of merely offering a traditional final exam, he asks students to submit print-on-demand publications that consist of at least 10,000 words and display real production values, even in large lecture classes.

According to Scholz, students appreciate having produced a physical object at the conclusion of the term. Inspired by “pride of authorship,” many of them worked harder than they would have otherwise.

It could be said that Scholz is a fan of memorable endings, even if some of them might be considered unconventional pedagogical experiments.  For example, this year he devoted the last session of his class to online pornography.  As Scholz explains, “students asked for it,” and “everybody showed up” despite it being the end of the academic year.  As he puts it, “teaching about new and old social media is not all that different from other subjects,” although “the wonderful thing about teaching social media is that it is so relevant to the daily lives of students.”

Scholz has been teaching courses on cyberculture and new media literacies since 1999, but he still embraces his status as an outsider with an “unusual interdisciplinary background” that mixes art and research scholarship who remains “not comfortable in either of those areas.”  Even as digital media and learning becomes established as a recognized field, Scholz encourages people in the Digital Media and Learning Research Hub not to become too complacent or too quick to reject contributions from those outside the fold.  He also urges DML scholars to conduct more research oriented around “digital learning outside the United States” and develop more complex “histories of new media literacies.”

Scholz is particularly critical of accepting the cliché that young people are naturally “digital natives.”  In his view, the concept initially encouraged much-needed attention to informal digital learning but was eventually too often misunderstood.  “The idea of the ‘digital native’ was useful to examine youth growing up with the Internet.  But it is now clear that not all learners born between 1980 and 2000 grew up using the Internet in a way that makes them automatically skilled users.  Digital immersion should not be mistaken for media literacy.”


To keep the classroom dynamic and lively, and to challenge students’ assumptions about the media they use, Scholz brings in many guest speakers, both those traveling through New York City and those available to his class sessions through Skype.  Although speaking through a screen can have disadvantages, Scholz argues that “usually it works quite well,” and it can give students a more global perspective that goes beyond the Anglo-American frameworks that they know best, and presents different histories of the Internet from the ones they are exposed to by promoters of hardware and software brands or mainstream technology journalism.  As Scholz sees it, Skype can provide surprisingly “intense and provocative and rich exchanges” if students have a sense of being situated in a contemporary debate.  In a slideshow about “Social Media for Higher Education,” Scholz shows some of his own experiments alongside the work of others.

Speaking as an advocate of classroom spontaneity and student inclusion, Scholz complains about well-meaning but misguided attempts to create twenty-first-century classrooms.  He puts his objections bluntly: “computer labs can kill every spark of creativity and conversation.”  He prefers using informal groupings and student laptops to the traditional layout of classrooms that reinscribe “hierarchy.”

Scholz asserts that “the way that academia is set up right now cannot continue,” because “very few people will be able to afford it” as tuition continues to rise.  Although distance learning looks like an attractive alternative to cash-strapped campuses and students, Scholz champions “a hybrid approach to the use of social media” and claims that “solutions should be a hybrid between face-to-face interactions and the use of new social media.”  (You can check out Scholz’s library of slide shows that are known for providing clear definitions and careful historical trajectories here, but make sure to attribute and respect them as free resources that shouldn’t be monetized).

A week without Google

In his scholarship, Scholz is known for his criticism of Web 2.0 ideologies and the corporate appropriation of collaborative practices developed by radicals, activists, and utopians for online communities but end up ultimately colonized by the interests of capitalism that exploit digital labor.  However, rather than demand that students reject familiar forms of social software, he encourages different kinds of engagement.  After all, for Scholz, “arguments about withdrawal or refusal” are largely just “reaching for the rainbow,” since commercial network sites function as a kind of “utility” for students (at least in America) who need to get jobs after graduation and struggle with “huge loan pressures” even when they do.

Scholz promotes the use of Free and Open Source software tools and services, but also incorporates activity on corporate sites into classwork to encourage critical thinking.  He also sometimes assigns what could be called “inactivities.”  For example, he asked students to try a week without Google, during which they were required “not to use any Google product at all” and to seek out “alternative resources.”  Although students “thought that it couldn’t be done,” soon they discovered that it was “not impossible at all.”

Scholz is also known for encouraging more collaboration and conversation between “teachers, students, learning scientists, policy makers, artists, programmers, and librarians,” first through the iDC mailing list that represents his “Institute for Distributed Creativity,” and then through conferences, such as last year’s conference on The Internet as Playground and Factory.

Next: International Future of Learning Summit

Now, Scholz is planning another conference in his series devoted to The Politics of Digital Culture: The International Future of Learning Summit (IFSL). As of now, there are five major themes:

1. Imagining the School of Tomorrow through the Lens of Informal Learning Networks and the New Institutionalism
Brick and mortar education is in crisis: tuition is on the rise and in the foreseeable future, higher education will be as unaffordable as a Van Gogh painting. Many students graduate with huge debts that will take them years or even decades to pay off.  This summit theme will bring together global learning networks and do-it-yourself institutions, progressive home schooling, and unschooling groups to envision best possible learning situations for the future.

2. Critically Revisiting Common Assumptions Corresponding with the Idea of the Digital Native
The idea of the digital native was useful to examine youth growing up with the Internet.  But it is now clear that not all members of the generation born between 1980 and 2000 grew up using the Internet in a way that makes them automatically adept users, whose cognitive abilities are completely different to learners of the past.  Has learning without digital media really become impossible?  What would effective hybrid digital/analogue learning situations look like?

3. Mobile Media: Learning from Japan, Brazil, India, China, and Russia
In the over-developed world, large, well-founded infrastructures support institutional learning.  In the under-developed world where there have long been significant information gaps, mobile phones allow for information sharing.  How does mobile learning change what we know?  What can educators in America learn from mobile learning projects worldwide?  How can educators in countries like Kenya, Brazil, India, China, Russia, and Japan help to solve our problems, and how can the over-developed world share their resources with the rest of the world in a more meaningful way?

4. Open Learning Ecologies
Gregory Bateson coined the term deutero-learning, meaning “learning to learn.”  What are the pedagogical processes through which we can effectively learn with openly accessible resources?  Access to knowledge does not necessarily mean that learning is taking place and that leads to the question, how are we learning to learn with available resources?  How does the lack of broadband infrastructure in America limit access to knowledge?  How can the US Department of Education put a stronger emphasis on open education?

5. Design for Play and Participation: Collectively Reimagining Learning for the 21st Century
This section of the summit aims to rethink the necessary changes in what we need to learn.  How do learners become ethically and politically committed cultural agents?  Which social values should we propagate, and how are they adapted to informatic environments?  Which skills do future journalists need to have, for example?  How can play lead to exceptional learning outcomes across the borders of nation states and language communities?  What are respective histories of thinking, reading, and writing?  Which recent technologies, strategies, and techniques improved student engagement inside and out of school?