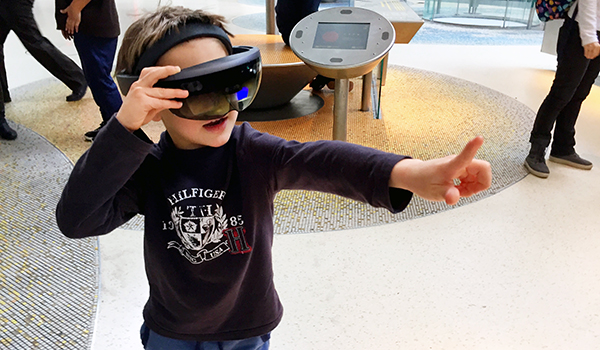 When I read Camillia Matuk’s The Learning Affordances of Augmented Reality For Museum Exhibits on Human Health, I knew I wanted to speak with her about AR and learning. Camillia is assistant professor of educational communication and technology at New York University (with a Ph.D. in the learning sciences from Northwestern University, an MSc in biomedical communications from the University of Toronto, and a BSc in biological sciences from the University of Windsor.) She does design-based research investigations to better understand how innovative technologies and learning environments can better support teaching and learning.

Q: Camillia, thank you for joining us in discussion. What came first? An interest in learning, augmented reality or museums? 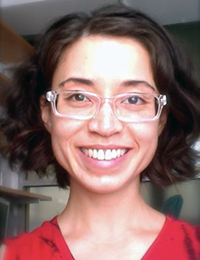 I’d say it was first my interest in museums, then in learning, and, much later, in augmented reality.

Museums were always a favorite pastime growing up, and were partially responsible for the interest I eventually developed in visualizing science. Although I eventually left the field, my four years as a medical illustrator studying at the University of Toronto and then working at INVIVO made a big impact on me. Still, it was only when I left that field and delved into research did learning come to the fore as a topic of study. As a Ph.D. student, I researched how people made sense of science from visual representations, like the cartoons of evolution that were on display at the Field Museum of Natural History. Later as a postdoc, I studied the role of technology in supporting K-12 classroom science inquiry.

Q: How did this lead you to your recently published study, “The Learning Affordances of Augmented Reality For Museum Exhibits on Human Health?”

I had begun a project with a neuroscientist and NYU Ph.D. candidate, Oliver Vikbladh, to create an immersive experience of how the brain creates memories of space. The idea was to bring to life Nobel prize-winning research on the brain’s positioning system by allowing people to explore visualizations of place cell activation as they navigated a physical environment.

With Andre Fenton, Ken Perlin, and Jan Plass, we had won a University Research Challenge Grant from NYU to kick start the idea. With artists and former NYU graduates, Adrian Sas and Javier Molina, and with two NYU digital media students, LaJune McMillian and Mahe Dewan, we created a virtual reality experience that was exhibited at Creative Tech Week in 2016.

At the beginning of this project, we considered many different potential technologies. Although we eventually settled on virtual reality, augmented reality was high on our list.

Around this same time, Judy Diamond, a professor and curator at the University of Nebraska State Museum, was putting together a special issue of Museums & Social Issues, all about the ways that museums are taking on the challenge of educating the public about the dynamic and sometimes controversial issues surrounding human health and medicine. Her invitation to contribute to this issue sparked the idea for this article.

Q: What were some of your key findings?

Well, I found a lot of activity by various groups developing AR technologies, and examples of its applications in diverse settings, such as tourism and advertising, cultural heritage museums, K-12 science education, construction, and space navigation. Some of the empirical studies I found on AR in education reported its value in engaging and holding learners’ attention, and also in enhancing their conceptual understanding and collaboration. But these were exceptions. In all, there was limited systematic research to be found on how people learn from AR.

So, the paper argues that AR is well suited for communicating science, particularly topics in human health. It explains and illustrates its potential affordances, based on research in the learning sciences. These affordances included its ability to represent relationships in space, time, and context, which are critical for understanding, for example, anatomic structures and molecular processes; its ability to immerse learners in interactive narratives, which can help to keep the human element of health and medicine at the forefront of a learning experience; and its abilities to personalize learners’ experiences and to support them in learning from others, which are generally beneficial for learning.

This is such a big question, because AR is a relatively new technology to education, and research on AR in educational settings is only just beginning. So, I want to say that all questions about AR and learning are important and unanswered! One review I came across called AR “a solution looking for a problem” (Dunleavy & Dede, 2014, p. 743), which I think is so appropriate.

We do know that people get really excited about it. Most studies find that learners report increased motivation and positive attitudes, which are important for learning. But when the novelty wears off and AR becomes as common as web-based video, it would help to have research-backed principles for using it effectively.

For example, how do we use AR as a conceptual scaffold — to give timely and targeted guidance and feedback — without cognitively overloading learners? How might we best take advantage of its location and user-awareness capabilities to personalize learning experiences across various domains and contexts, and for different learners? What are effective patterns for coordinating interactions between collaborators and the digital and physical materials that they work and play with? Building up examples and documenting lessons learned will give designers and educators ideas, resources and guidance for integrating AR into classrooms, museums and game-based learning experiences.

I’m looking forward to new technological developments that may overcome the usability issues with AR, namely, the difficulty with tracking and image processing that can cause AR information to jump around and not stay superimposed where it’s supposed to. Bacca et al. (2014) discuss this in their review as a cause of frustration for learners.

I’m also looking forward to how these developments might improve AR as an expressive tool for designers to create even richer interactive narratives, and for learners, who might learn through creating their own AR experiences.

Ultimately, I’m eager to see how research on AR in education might transform our ideas about learning in situated, authentic contexts.