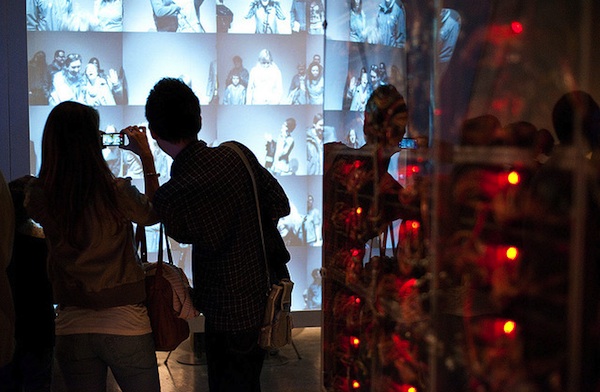 Museums, like many public sites of informal learning, are struggling to understand the roles digital media can play within their walls. In short, are they an obstacle to engagement or a new path to knowledge? I recently saw both ideas reflected in popular media and the experience left me hoping for a third path between the two extremes.

There’s a New Yorker cartoon, published this past March, that shows a mother and child in a museum, the child pointing a device towards a painting. “It’s an audio guide, sweetheart,” the mother explains, “not a remote.” The cartoonist is poking fun at the perceived expectations of today’s youth to use digital tools not just to augment but to interact or participate with the world around them. Depending on your perspective, the tools are either preventing the child from appreciating the museum or enhancing ways of learning the museum is failing to address (Incidentally, my 7-year-old son thought the cartoon was hilarious, as he interpreted it as actually being about the man in the background who “thought the guide was a phone”).

There’s an AT&T ad (right) that shows a woman walking through a museum yet fully connected to her Facebook community as everything around her is transformed into reflections of her digital life. A statue transforms into a girlfriend with her new haircut. “Us girls are going dancing tonight,” an older male guard says to her, mimicking a recent text message. “You in?” The ad, supporting this deep integration, of course wants us all to say, “Yes!” (it is a phone ad after all). But when I showed the ad to my father, who turns 82 this month, and asked him what it was about, he laughed with embarrassment and said he couldn’t make heads nor tails of it. To me the ad, on one hand, suggests digital media can create a personalized visit by filtering a museum experience from a hyper-personal angle. On the other hand, it also suggests digital media prevents people from experiencing a direct, unmediated connection with museum content.

The dichotomy between the two, however – the wired versus the unplugged, my son versus my father – is a false one. We all struggle to balance our attention between two sides of the screen. And finding that balance is something museums are currently struggling to achieve. Museums are “caught between contradictory demands for connectivity and contemplation,” says the the recent Future of Museums’ TrendsWatch 2013. The annual report identifies six significant trends in museums. Alongside chapters with names like “3-D Printing” and “When Stuff Talks Back” is “Disconnecting to Reconnect.” As an organization, the Center for the Future of Museums is as “wired” as they come, but even they can’t ignore the Musée d’Orsay banning all photography and what they described as a “backlash against digital immersion and in favor of quiet contemplation and face-to-face contact.”

One way to balance our attention, explored in a follow-up blog entry called “Museo-mindfulness,” is learning to focus our attention in a mindful way. “Perhaps it is time for museums to…become a cultural force for mindfulness, providing refuge in the melee rather than contributing to it.” A museum in Los Angeles offers mindfulness meditation sessions that begin in the classroom and lead into the galleries, and at least two other California museums are following suit. But digital media need not fall at one end of a mindfulness spectrum with connectedness at the other end. The best guide I’ve read to navigating the digital age – Howard Rheingold’s essential Net Smart: How to Thrive Online – tackles the topic head on in the first chapter. “Mindfulness is what connects your attention to skills of digital participation, collaboration,” and the other skills required to “thrive online,” Rheingold argues. And in the section, “Mindfulness in an Always On World,” he writes, “Mindfulness is the most important practice for anyone who is trying to swim through the infostream instead of being swept away by it.”

Rheingold’s third way is neither to romanticize digital affordances nor run in fear from their dark side. Rather, he recognizes that whether faced with either extreme, we, and not the tools, are in charge. The more museums can empower their visitors to control their attention, to be in charge of how the digital mediates their experience, the more museums can contribute towards helping us all find the balance we seek.