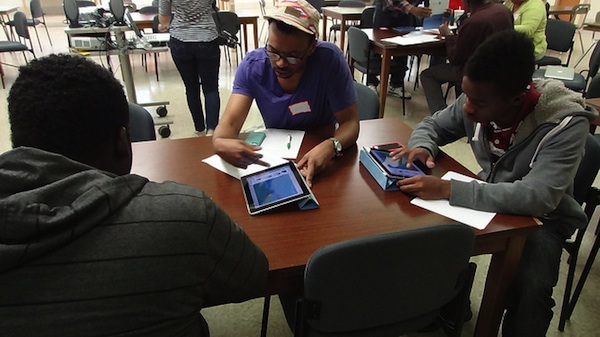 The recent international conference of researchers on human-computer interaction CHI 2013 in Paris presented the opportunity to survey current trends in the so-called “learning sciences” and to assess new methodologies for computer-assisted education (In 2010, DMLcentral covered the SIGGRAPH conference in Los Angeles here).

One of the up-and-coming HCI innovators, PhD student Derek Lomas, presented twice at the CHI 2013 conference, describing his experiences both in K-12 classrooms in the U.S. and in digital literacy projects in India.  Lomas agreed to an interview to discuss his experiences in PlayPower  and PlayPower Labs, now based at Carnegie Mellon University. 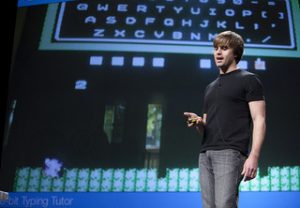 As the conversation began, Lomas laughed about the fact that he had “basically been working on the same project with the same goals” for most of the last decade.  “It began as a critical art innovation, then became a nonprofit, and then turned into PhD research, and now it is a start-up.”  He started with a modest “Open Classroom Challenge Grant” from the University of California Institute for Research in the Arts for a 2007 social design course called “Situated Social Architecture” for Sixth College in UC San Diego.  At the time he was part of the campus’s Social Movement Laboratory, while he was also conducting ethnographic fieldwork on the use of mobile phones as first computers in India with Qualcomm.

As he worked on the problems of social architectures and the role of space and place in education, he became interested in “engaging with much larger institutional systems” – although he soon realized that the political issues around the development of common core standards could become “like tripwires” to hackers and hacktivists interested in effecting social change, particularly when policymakers and other stakeholders invested so much of their energy in “figuring out what side of the aisle you are on,” especially in relationship to the informal learning movement.  Lomas noted that for many claiming expertise in instructional technology “to define yourself you need to put everyone else in a box.”

In developing his own instructional design philosophy, he focused on the bottom line of acknowledging that “massive shifts were taking place around the cost of technology” and that “the need for effective and engaging content” was becoming more acute at the same time.  For Lomas, this involved “the recognition that the cost of computing in developing contexts was not the barrier but the lack of content.”  He explained how the MacArthur Foundation provided seed money for design workshops for implementing the IDEO human-centered design toolkit in a variety of learning contexts – from India to Brazil to New York City – with a classic 8-bit computing platform.  Lomas described how meeting Kishan Patel in Hyderabad expanded his thinking about collaboration and how it led to a loose network that included “8-bit designers in the Brooklyn tech scene collaborating with field workers and doing tests.”

Lomas cautioned against bringing techno-missionary attitudes to the developing world.  “We were not introducing this technology; the kids already had them. You could buy a $10 computer in the marketplace.”  Lomas explained that his team was “not encouraging young people to engage with alien technology; there was already a rich culture of gaming and one rupee arcades.  What was missing was a pathway for them to have their own content.”

“We also wanted to have an educational impact and bring high impact skills, such as typing and programming, and we wanted it to be social.”  As his collective of university researchers and workers in nonprofits continued to develop, the group focused specifically on number sense and fractions and developed content for FractionPlanet.com.  Moving forward with this concept, Lomas and his team launched a series of massive experiments that used pervasive testing and randomized controlled trials with tens of thousands of anonymous participants.  Lomas observed that fractions often formed an impenetrable “barrier to higher math and to STEM proficiency.”  After all, Lomas noted, half of all eighth graders lack basic abilities working with fractions.

Lomas and his collaborators partnered with BrainPOP, so they could test different games.  Although Lomas chuckled about the difficulty of “measuring fun,” he argued that EEGs were hardly necessary, given the fact that a game played for longer is more engaging, although he argued that engagement needed to be combined with other learning measures.  The large data stream coming from users who almost always play during school hours could give researchers a lot of raw material.

Lomas asserted that adopting a more consumer-oriented business model could improve the quality of educational games, when a start-up’s survival depended on the popularity of its product rather than the metric of publications written by university researchers.  He described why his group hired professional animators to generate polished media and lauded the Techstars program for helping his team think “not just about taking whatever product you have to market, but also helping you go through a process to make sure that what you are making is what you should be making to have it used in the world.”  He observed that four of the ten educational game companies had received DML funding, which served as “evidence that the kind of stuff MacArthur has been catalyzing is really continuing in viable spaces.”

Although the common core remains controversial among many educational reformers, Lomas claimed that “the common core turned into a real benefit for us.  It defined a common value system that is measurable, and it served like a lingua franca, so we could start mapping games to different topics with a sense of their sustainable use value over time.”  He said he understood why many in the digital media and learning community were reluctant to “kowtow to common core,” because they feared that it would make the current crop of terrible educational games even worse.  But Lomas maintained that “our basis is the user and doing a lot of user testing.  If kids look miserable, we need to provide more support to ensure that they understand the game mechanic” and steer away from conventional design decisions oriented around tedious multiple choice structures that are “more boring, less responsive, less meaningful, and without context.”

In addressing the accusation that educational games often try to be “chocolate covered broccoli” concoctions that mask instruction, Lomas stated that he did not “try to trick students into learning or try to hide that it is math.  Not all of our games are in context.  One game called ‘Place Value’ is about the number system.”  He also noted that “we want to make interaction with numbers fluent and responsive and providing feedback,” which means that his group sometimes integrates multiple choice questions into their games.  “If we want to interweave problem solving with meaningful context and help kids understand math in multiple situations, we know that one of the contexts in which they will need to learn in is in multiple choice.”

However, Lomas admitted that “no matter how great a game we make, it is still very niche” in its appeal, and he described a number of “macro level issues that we wanted to address” about “the kinds of practice activities that could be embedded in a meaningful context.”  He posited a hypothesis that conceptual fluency was best supported by the kinds of meaningful play or purposive programming that he was designing for, because “kids forget how fractions work” and should “play over time to be better in core subjects.”

For, example, he was enthusiastic about helping kids learn game programming in charter school settings and suggested that DMLcentral readers might be interested in following the results of the K-12 Video Gaming Conference scheduled for October.

Lomas’s biggest complaint about the current instructional technology environment had to do with the fact that “the amount of money spent on content in schools is ridiculously small, about 1% of all educational spending is on content.”  Textbooks, library books, software, and instructional technology support come to a pittance, according to Lomas, especially in comparison to the investment in hardware.  Sadly, he said, there is “not a line item for it” much less an understanding that content should be a “national priority.”

To enable the economic survival of the PlayPower labs, Lomas said they were now “pivoting to a technology platform that can power digital textbooks that will be coming onto tablets” to offer games as an alternative to multiple choice questions.”  He admitted that “right now it is hard to do math on a tablet; often it is easier on paper,” but he said his team was working on ways students could even “show their work” to demonstrate their understanding of mathematical processes.  As a pragmatist, he pronounced that “tablets are coming: 50% of all households have a tablet with an ethnic breakdown that is evenly distributed to match demographic projections, up from 26% the previous year.”

“The question of whether or not it is the ideal medium is not inherent to the medium itself, because it is not like textbooks have been the paragon of anything.”  Instead, what we must contend with, according to Lomas “is a shameful lack of investment” that advocates for free and open source technologies can sometimes unintentionally exacerbate when districts are eager to “save money by taking this 1% in spending and reducing it further” rather than capitalize on “massive investments in hardware” with better software.

In response to the concerns that tablets foster passive rather than active modes of computer use that accelerates a “generational shift” in which “people are becoming more passive,” Lomas said “we’re investing in expanding the range of interactivity on tablets, so kids can express their mathematical thinking.”

Lomas and I might disagree about iPads, proprietary technologies, and the common core, but he is unquestionably an imaginative researcher eager to engage with critics and he hasn’t left his hacktivist past behind. You can learn more about $12 computers from Lomas in this Pop!Tech talk.