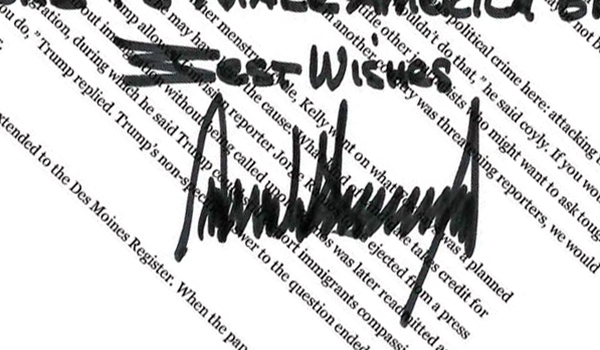 For most of the past decade, I have spent a week each summer reading essays by high schoolers in the Advanced Placement program. In the past few years, I’ve noticed a trend: They are getting easier to read.

Not in the sense that the students are better at organizing their ideas or crafting sentences than they have been in previous years, but rather they are literally easier to read. This past year, while reading through my 100th or so essay one day, I realized why: Most of the students aren’t writing in cursive anymore.

Of course, some students still have difficult handwriting, but where in past years, I would be forced multiple times in a day to pour over incomprehensible writing full of indistinguishable curves and lines, now this is less and less the case.

Consider presidential candidate Donald Trump’s handwritten note in response to an op-ed by Kareem Abdul-Jabar. Although the note has drawn attention for its content, when I read it, I saw the billionaire real estate developer’s signature and wondered, “Shouldn’t ‘Trump’ have a ‘T’ in it?” Whatever your political or personal opinion is of Mr. Trump, his printing is precise and legible, while his cursive signature is impossible.

Of course, my experience reading student essays every year is not a representative sample, but there is a growing concern from various quarters that cursive writing is slowly being phased out of children’s education. Some people are very concerned about this, particularly because the controversial Common Core standards do not require instruction in cursive writing.

Personally, I have not found the arguments of supporters of cursive writing all that compelling This list starts off bad, and gets worse. More thoughtful essays do not fare much better.

For example, what about the argument that schoolchildren will lose touch with the past, being unable to read documents written in script, such as the U.S. Declaration of Independence? In addition to their script documents like the Declaration have other archaic and difficult features, from unfamiliar vocabulary to antiquated spelling — “necefsary” or “caufes”, anyone? — that necessitate interpretation and mediation. And, further, people do not need to know how to write cursive in order to read it.

Some have tried to argue that cursive is good for brain development and other tasks, but, while there is a strong body of evidence linking handwriting (print or cursive) to development, cursive alone does not seem to provide students with any unique benefits.

So, what is the point of all this? Perhaps the debate over cursive has received some outsized press lately, and I’m sure there are many people who could care less about it. I think it is important not for the subject matter, but because it represents the types of conversations that we should be having about education. Arguments for or against cursive writing are not arguments about content but arguments about the skills that we should be teaching in our schools.

What if we were to direct this sort of attention — with its focus on what skills students will need outside of the classroom — on all of our educational practices? As I have written frequently here, when attention is given to instructional technology and practices, it often is a knee-jerk reaction against what is new. Although I don’t think we should always accept new technologies simply for their newness, our debates about the future of education would be well-served if more stakeholders — parents, students, educators — paid more attention to the materiality of our learning practices and their effects. Even though cursive writing is not necessarily a developmental benefit for most children, the debate about these effects forces stakeholders to think about what skills students will have when they leave school, not simply about the knowledge they will possess, and this, I believe, is a very good thing.