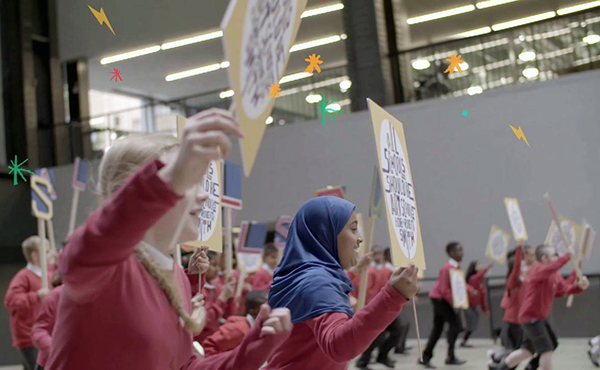 Disclaimer: The Tate Modern is one of my favorite museums. My previous apartment held a place of honor, above the couch, for a poster I picked up there. And, in 2014, I interviewed the developers of their awesome app, the Magic Tate Ball (re: Using “String and Sellotape” To Build the Magic Tate Ball). So, imagine my excitement when I was recently introduced to Kathryn Box at the Tate Gallery in London.

Kathryn manages and produces content for the Tate Kids website and the Tate Kids social channels, which focuses on games and films and articles that speak to kids’ interests in art and the wider world. After three years invested at the Tate, she seemed like the perfect person to speak with to learn about their latest innovations in digital learning and across the British art scene in general.

Kat, thanks for speaking with me today. How much of your work is focused on the physical spaces?

Eighty percent of my job is online. The other 20 percent is mainly in the London-based galleries. There is a digital studio, Taylor Digital Studio at Tate Britain where I run a program with colleagues called Digital Makers. And, then, up in Tate Liverpool, I help with the families program as well, sometimes mainly recording and maybe capturing those events through digital content. And, then, down in St. Ives, they do like a competition to get kids’ art in the gallery spaces and I do a digital element for that, too.

What does digital learning mean for the Tate?

I think it’s just another form of engagement, and another form of connecting people to the collection. Everyone has a phone in their pocket now so it feels really natural for us to be using that as a tool to connect people to what we have in the building.

We’re really trying to work out as well not just using digital tools to connect people to the collection but also working with artists and showcasing artists that use digital in their practice and showing audiences and visitors that that’s a way of making art as well. There are just loads of different types of digital making now, like a digital painting on your iPad that we’re trying to show as an authentic way of making art. It’s really important for us because the future of our making will be digital. We’re trying to showcase that to the audiences and making sure that we’re making participatory projects so people really feel like they’re adding to something and not just, like, watching something on the wall.

When you think back at some of the successes you had with new digital learning initiatives in the past three years, what jumps to the top?

About three years ago, code clubs started really taking off in the U.K., and kids were really engaged in making video games, and I was excited to connect both that digital making with the collections at the Tate. So, everything we’ve done is part of an experiment to innovative ways of thinking about digital in kids. But, for me, the most exciting stuff has been when we did an activity with Aardman, an animation studios in the UK that made the Shaun the Sheep movie and the Wallace & Gromit cartoons. They came in and we did an animation workshop with them; that was really great. Super popular. It was really fun, and disrupted the gallery.

Another one that was really exciting is that we did a series of events with special educational needs children, who had learning difficulties. And, we worked with a group of sound artists called Pyka, that go into schools and teachers sound art. We made, like, a sound landscape with these young people. That was really exciting because it was part of a bigger project about diversity and thinking about how artists respond to that need.

What are some things you’ve done online or in mobile?

Back in May, we launched the new Tate Kids, based on really thinking about how kids are interacting online now. Tate Kids was launched in 2007 and was feeling a bit like a dinosaur. We did some research starting with what kids are interested in now and how they engage with digital now. Ultimately what came out of that is they’re going to have two personas: they’re looking for art homework help or they’re looking to just have fun online with art.

We were trying to also think innovatively, about how websites work now, and how people engage with content that is snackable, such as with short-form film content. They are a YouTube generation, wanting step-by-steps of how to do digital making. We also started producing more HTML5 games as well, thinking about art games and how we can inspire creativity online through the process of games.

One of our most recent games is Art Parts, basically a series of Tate artworks that have kind of had a piece taken out of them. And, the narrative of the game is that it’s the future and the machines have stopped working and that you have to use your human creativity to fill in that artworks. And, that came out of a conversation with children about the fact that they are quite intimidated sometimes by the work in Tate. Everything looked really professional and done and it took a lot of time to do. And, I was like, okay, well, we need to find an easier quick way for people to engage and kind of create and remake the Tate collection.

What’s coming up in the next year or two that gets you excited about digital learning?

I’m quite excited about getting more children’s voices on the site. I think, for me, that’s really exciting and important. We’ve a Tate Kids media team where we invite kids in to respond to the displays. And, I want to make more stuff with them, really, and to think about what other kind of digital experience they can co-produce.

I’m also looking forward to a kids game Jam. I’m looking forward to giving the steering to them and letting them be the ones in the driver-seat, doing some design thinking, and then pairing them up with some game designers. I think that will be super fun. So, if anything, I just want to have more kids involved with what I’m doing because I know they had all the answers.

When you look out at the landscape of digital learning in museums, what jumps out at you as major trends that you’re helping to lead or ones that you’re trying to learn from?

I am really inspired by the British Museum Samsung Digital Discovery Centre. They have made a VR Bonze Age site and to gets kids to experience history in that way is really exciting. They got school kids to come in and experience what it was like to be in the Bronze Age. Some of the objects had been scanned and you could see them actually working in this kind of virtual reality house. That was really good.

The FACT (Foundation for Art and Creative Technology) Gallery in Liverpool recently did an exhibition called Group Therapy: Mental Distress In A Digital Age, which explored the complex relationship between technology, society, and mental health.

And, then, in relation to trends, it’s kind of an exciting time but you’ve got to be careful with trends, not to get too excited by them. But, I think there is obviously something with VR and AR — we’re looking at how it could be really beneficial, as a beautiful and exciting and educational experience, which hopefully would create some empathy and understanding about art and artists.

And, then, what’s also quite interesting are the realms of chatbots and voice activated machines. We’re doing some research into that right now, and how we could potentially put content through voice in Amazon’s Alexa, how we can get audio content into the home differently.

I’m also thinking about STEAM, how we mix both engineering technology with art now and how we can make that as accessible as possible. There are some really cool festivals that happen in the UK like Blue Dot Festival and Abandon Normal Devices and Playable City. They’re all about bringing science and technology and digital into your everyday.  And I feel art has a real part to play in that.

I’m in a constant state of jealousy around how cool the sector is. We really try to push people to connect to history and culture, and digital is definitely the transportation device for all that.