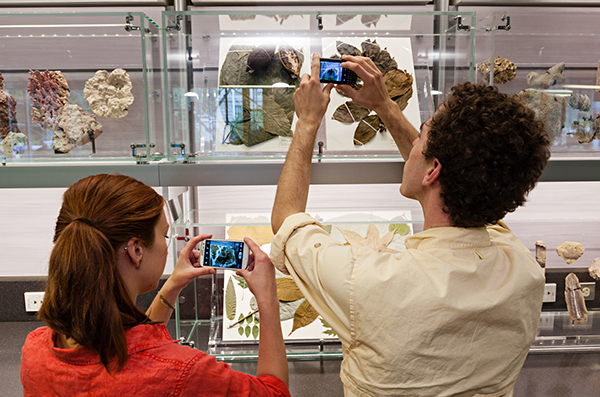 I reached out to Rebecca Bray, the chief of experience development at the Smithsonian’s National Museum of Natural History in Washington, D.C., to learn about how the museum developed and now runs its innovative Q?rius (pronounced “curious”) space, opened in 2013 as an interactive and educational lab with microscopes, touch screens, interactive activities and a “collection zone,” housing over 6,000 different specimens and artifacts visitors can handle.

In our conversation below, we explore their design process, the role of youth learners, the pros and cons of integrating digital media into a hands-on learning space, and more.

Welcome to DML Central, Rebecca. So, how do you describe Q?rius?

Q?rius is a space, an interactive space, in the museum. We always said that it’s not an exhibit, right? It’s really an interactive learning space, designed mainly for 10- to 18-year-olds and their loved ones.

The space itself is really very flexible. Everything there is on wheels, except for a large collection space, and even in there everything is very modular and flexible; but it’s really meant to be a space for visitors to do hands-on interactive work around the specific kinds of natural history science that our researchers do. And, it’s also a space for the education team to experiment with new ways of interacting with the public; we think of it as our learning lab as well — we do a lot of experimenting and testing of new ideas in there.

When you think about it overall, what would you identify as some of the key innovations you took on?

So many things! When we were designing the space, we had a lot of conversations about this target audience of 10- to 18-year-olds. The outside exhibit design company that we were working with was saying, at first: “Oh, you should have a lot of technology, because teens love technology.” But, after we did some front-end studies, we saw how much people really value their encounters with the authentic objects of the museum. So, we said, “Let’s actually deemphasize the screens in the space and have the focus be on the objects and doing things with the objects.”

But, we also, at the same time, were trying to do a bunch of stuff with screens. We wanted them to see a video of the scientists in the field and we thought the screens could really lead people through the activity. So, you would have a touch screen and then you could kind of click through and it would give you instructions about how to interact with the objects in the room.

After making that, and putting it out there, and having it in the space, we pretty quickly realized that it wasn’t working. People couldn’t do both — they didn’t want to both interact with the screen and with the objects. It was just too much.

So, we actually stripped away even more of the screens from the space. We made the activities more about the objects themselves, with very simple paper instructions, and then kept the screens for very particular purposes, which was really to access more information about the objects themselves, separate from the activities. So, that was an important learning. But, it’s still an ongoing question about this balance between screens and non-screen experiences.

What else do you need to consider when thinking about integrating screens?

I think at some point in the design process, we thought about having everybody carrying around an iPad that would be like their personal digital Field Book as they go around the space, collecting objects. But, again, we found that they weren’t social enough and we also had this challenge of object versus screen.

Yet, you found another way to do the Field Book, which my daughter enjoyed when we visited.

Yeah, so if I had a million dollars, we would redesign the Field Books. And, we actually knew that even going in. We knew we didn’t have enough money to do it perfectly, but we still decided we had enough that we could pilot something and be an enjoyable experience. We have lots of visitors who really like it and they collect their digital collections into Field Books and look at them at home; but yeah, I mean, I think with software you need to have enough money to continuously upgrade it as you learn more.

What role do youth play supporting the space?

We’ve had them continuously involved in giving feedback. We have over a hundred teen volunteers, and some of those have been leveled up to be captains. They help us develop activities and programs and give us feedback on a lot of stuff that happens in the space.

How do you design new activities for the space?

Since we use an iterative design process for the activities that we build, we’ll work with a scientist and our design team of educators to develop some very rapid prototypes. And, then, we’ll go out and do testing and observations. We have developed some assessment instruments that we use to test things and to see, really to understand, how visitors are interacting with it and how to move along a spectrum of understanding. We’ll test things at least 10 times and collect a lot of data about how people are interacting with it and, then, we’ll use that to refine something as we go along.

A big part of this has been creating a culture of rapid prototyping and testing within our department and helping to spread that to other departments, to test everything that we do in a pretty deep way, beyond just going to visitors and asking, “Do you like this title for this activity?” It’s a difficult thing. It takes a lot of time and you really need to train your staff to know how to do it.

In fact, when we were in the conceptualization stage, we were able to go into the museum and do a bunch of testing of the kinds of activities that we knew we wanted to do. And, it was so useful. I wish that we had actually been able to do more of that, to really spend some time actually making the stuff that we thought was going to be in the space and getting it in front of visitors and being really reflective and really thoughtful about how they were responding to it.