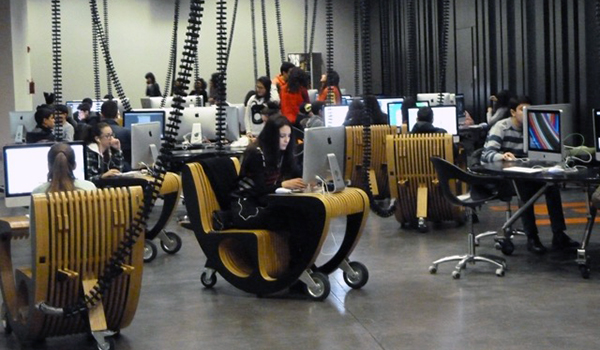 Whether stated explicitly or not, a core proposition of DML is that there are deep consequences to the ways that young people are learning both in and out of school and using digital technology with peers, in affinity groups, as they develop interests and expertise. In the context of the U.S., digital media and learning (DML) offers challenges to the school curriculum and significantly to the organization of the out-of-school, community-based non-formal learning sector. But, what could it mean in other places around the world? 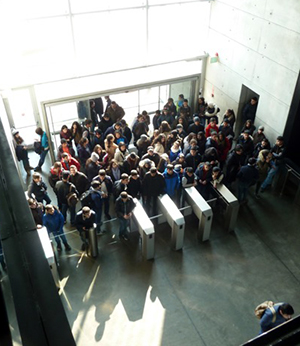 I recently visited TUMO Centre for Creative Technologies, in Yerevan, the capital of Armenia. Occupying two floors of a brand-new building, the centre offers a range of organized learning experiences that develop creative uses of digital technologies. Young people (starting around age 12 and supposedly meant to finish at around age 18 — although in practice many stay on as they begin university) can follow courses in animation, web design, filmmaking and game development but also in graphics, music, 3-D modeling, robotics and photography. When the centre opened about four years ago, it developed a substantial online program to support self-directed study. A content team of around 30 people write units for study and assess progression. The contemporary building vividly contrasts with the decaying concrete apartment blocks in the disorganized post-Soviet city un-planning that surrounds it and screams a particular vision of a techno-future.

However, as the centre grew — 7,000 young people now come through its doors every week and it is opening satellite centres in three other locations across Armenia, it has significantly changed its teaching. Now students do the online components more as a form of introduction and continuous study and attend workshops which are more intensive collective, social and production-based forms of activity often leading to presentations, performances and public displays. Often drawing on expertise from diaspora Armenians, who are more than happy to come and teach for a small period of time, the range of content areas has now morphed and grown, often focusing on more unusual one-off activities from architectural design to a photography exhibition on a train which acts as a moving market.

TUMO is mainly funded by diaspora Armenians (often from the U.S.) and unlike the U.K, where I am based, has no state- or city-based funding. It is virtually free to all-comers although we don’t know as yet what kinds of young people are taking up this offer. Despite the extremely organized and focused attention to learning pathways, it stands outside of the formal education system and this has a number of consequences. First of all, attending organized out-of-school programs appears to be much more common in Armenia than perhaps in the U.S. or the U.K. Again, hard evidence is difficult to come by but it seems as if there is a tradition of after-school education from music or art schools and especially chess schools to TUMO. Many young people (and again more research is needed here) have private tuition after the school day finishes at 2:30-ish. The existence of this “market” not only frames the activity as educational but, it means that young people and their families have the expectation of a certain sort of outcome from taking up these opportunities. There is a higher level of disadvantage across the country as a whole than in the U.S. where, of course, disadvantage exists much more in terms of profound social inequalities. Again, translating our norms of providing for underserved youth needs recalibrating.

Secondly, the Armenian education system, probably as part of its Soviet inheritance, is very traditional (to use our language), focusing significantly on mathematics and science. Not only does this mean that many young people might be excluded from such a tightly controlled curriculum but, it also means that huge areas of human endeavor — especially those relating to new forms of disciplinary provenance such as animation, computer programming and, indeed, many forms of creative uses of digital technologies are entirely absent from the school or university curriculum in general. For many people in Armenia, digital technology means access to computers rather than an understanding of what to do with them and how to build on their cultural and economic possibilities. Young people attending TUMO find the creative and production uses of the technology and the introduction to a huge range of aesthetic and arts-based production possibilities profoundly different from their experiences at school.

And thirdly, the Armenian education system has also inherited what we might think of as a conservative transmission based attitude toward knowledge and learning in general. Many classroom activities take the form of closed comprehensions or direct instruction with teacher-talk and subservient students. Assessment is rigorous but very much based on a correct/incorrect or pass/fail model. Again, the TUMO experience offers a far more progressive pedagogy both online and face-to-face. It is social, collective and production-based.

I have argued elsewhere that one of the key values of out-of-school learning is precisely that it is not like school. For all the ways that TUMO fits into the local Armenian ecology of learning, in terms of the after-school market, it is using digital technology and how that technology reconfigures learning relationships between young people in new and engaging ways. This, then, frames the same challenge posed by DML in the U.S. to educational reform but by staying out of the very difficult challenges facing the public school system in Armenia, TUMO is clearly going to raise expectations in young people and their families and these attitudes and habits of learning will have consequences for how that society continues to develop both in democratic terms and in relationship to economic growth. Whether (like DML), it can succeed in this challenge to educational reform by acting (in institutional terms) outside the education system or whether TUMO (like DML) will need to create curriculum and pedagogy within schools and higher education, it is impossible to say but, it stands as an intriguing example of our collective reform aspirations albeit in a very different context to the ones we are likely to know.