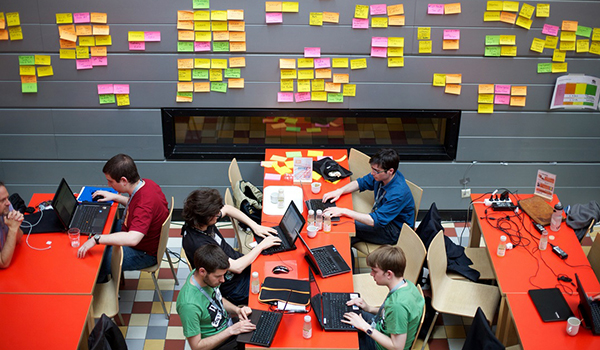 The rapid growth of learning to code clubs, makerspaces, hackerspaces and even makercities has been remarkable. It’s fairly logical, then, that the focus for various coders, makers and hackers has switched back around to focus on education and learning itself. We’ve learned to code, hack and make new stuff, why not code, hack and make a new kind of education?

A recent article entitled “Hacking Education” in Wired makes the case that many coders, hackers and makers are now choosing to educate their own children through the DIY logic of digital making. It profiles a new breed of homeschoolers — the techie parents who see public or state education as fundamentally broken, and have chosen instead to educate their children themselves.

But, this is not the fundamentalist homeschooler of liberal stereotyping. Instead, the DIY homeschooler sees makerspaces and hackerspaces as ideal kinds of educational institutions, where children are learning directly through tinkering, hacking, coding and making, rather than being educated in the prescriptive, standardized mould of schools.

These new homeschoolers blend the approach of tech entrepreneurship with a much longer lineage of progressivist education, a lineage that of course includes such important “deschooling” figures as Ivan Illich and “unschoolers” such as John Holt. It would be interesting to do a detailed historical genealogy of the juxtapositions and convergences that have brought about this way of thinking. The deschooling and unschooling movements fundamentally saw schools as overly constrictive, and advocated instead for learners to engage in more self-directed education in real-life settings and social networks. This is an irresistible invitation for those with a DIY maker mindset when it comes to rethinking education.

Through the convergence of DIY tech entrepreneurship and progressivist thinking, the new hacker-homeschoolers represent a new breed of neo-unschoolers. As the Wired article explains:

“They don’t prefer homeschooling simply because they find most schools too test-obsessed or underfunded or otherwise ineffective. They believe that the very philosophical underpinnings of modern education are flawed. Unschoolers believe that children are natural learners; with a little support, they will explore and experiment and learn about the world in a way that is appropriate to their abilities and interests. Problems arise, the thinking goes, when kids are pushed into an educational model that treats everyone the same—gives them the same lessons and homework, sets the same expectations, and covers the same subjects.”

The neo-unschoolers acknowledge, however, that such an individualized model can’t work “at scale.” The intriguing technological solution offered by the unschoolers in the article is to create new kinds of “hybrid” schools, somewhere between homeschooling and traditional school. Perhaps unsurprisingly, unschoolers suggest, such a solution has been found by a new crop of startups using technology to create new educational models. The prime example is AltSchool, set up by a former tech entrepreneur and Google exec with $28 million in venture-capital funding, which “prepares students for the future through personalized learning experiences within micro-school communities.” AltSchool brings the startup model to school. Anywhere there’s a market, a micro-school might start up. AltSchool is also managed on rigorous analytical, technical and scientific lines, albeit laced with the progressivist discourse from which it draws its central philosophy. As the AltSchool values claim:

“Our personalized learning approach puts each child at the center of everything we do … coupled with state-of-the-art classroom design and technology, [and] a flexible learning environment that mixes individual, group and experiential learning.

Our analytical approach and core strengths in innovation combine educational best practices with the latest tools. Our educators build learning experiences that are adaptive at their core and keep our children engaged.”

There is likely to be some merit in such aspirations. We can see the model of makerspaces and hackerspaces migrating to other kinds of “makerschools,” “startup schools” and “pop-up schools” that, run on progressivist principles, encourage greater exploration, inquiry and experiential learning through the active construction of knowledge and understanding, whilst monitoring and regulating the experience through learning analytics and adaptive learning software.

Yet, as with all things, the disruption of the model of schooling by the model of hackerspaces and startups does need some critical attention. Some might critique the privileges of wealthy liberal urban parents to remove their children from an overstretched and underfunded state education system— especially if they have angel investors and venture capitalists listed in their contacts. This is an important point. But beyond that, might we want to consider more critically the politics and perspectives of the neo-unschoolers? What are the implications of letting, coders, makers and hackers make decisions about the best ways of educating young people? What kind of education is provided by the likes of a startup school?

In a recent article in The Atlantic, Debbie Chachra has critiqued the language and culture of “makers.” In particular, she highlights how making has usually been associated with male-dominated activities, and argues that it is integrally bound to the culture of commercialism in tech entrepreneurship:

“Making is not a rebel movement, scrappy individuals going up against the system. While the shift might be from the corporate to the individual (supported, mind, by a different set of companies selling a different set of things), it mostly re-inscribes familiar values, in slightly different form: that artifacts are important, and people are not. … Describing oneself as a maker—regardless of what one actually or mostly does—is a way of accruing to oneself the gendered, capitalist benefits of being a person who makes products.”

In a particularly striking passage, Chachra compares coding as a valued form of making with teaching as an undervalued occupation. You can think about coding, she argues, “as eliciting a specific, desired set of behaviors from computing devices,” which is a much simpler take on “the deeper, richer, messier, less reproducible, immeasurably more difficult version of this that we do with people—change their cognition, abilities, and behaviors. We call the latter “education,” and it’s mostly done by underpaid, undervalued women.”

From this view, the kind of technical innovation associated with making is seen as having more value, and worth paying more for, than caregiving which is instead mostly about achieving greater efficiencies and lowering costs.

Yet, it is the logic of coding, of eliciting particular desired behaviours from computing devices, that underscores the vision of neo-unschoolers and the kinds of makerschools that they appear to desire. School is broken, they seem to be saying; let’s hack it, and create startups to do so. As one interviewee in the “Hacking Education” piece in Wired states, “The cost of starting a company has gone down because there are online tools you can use for free. I can see that happening with school. So much of that stuff is just up for grabs.”

These ways of thinking are not unique to the neo-unschoolers. They are reflected in the more widespread proliferation of hack events, coding for civic service, and other maker-based initiatives that put teams of computer programmers together, using code-sharing tools, to engineer solutions to public problems. These events typically involve programmers working with open data gathered from government services, and encourage the creation of software apps and data visualization techniques to turn it into useful new services. Code for America is the most high-profile example, which places coders directly inside of government innovation. In Smart Cities: Big data, civic hackers and the quest for a new utopia, Anthony Townsend has written that the underlying logic of Code for America, along with other civic coding initiatives, is that “knowing how to code will be an important skill for civic improvement.” The material practices and codes of conduct associated with the cultures, ways of viewing the world, and political convictions of tech innovators underscore these activities, particularly the assumption that technical engineering and coding solutions can be applied for “social good” and to hack human, social and civic problems.

Neo-unschoolers share the enthuasiasm for putting coders, hackers and makers to work on public and civic problems — in this case education. It is coders who will improve education, and who could be rewarded for doing so; not teachers, who are already de-valued, de-professionalized, and dejected. Using free tools, coders can fix education on the cheap, at pace, and at scale; not policymakers, who are encumbered by massive bureaucracy, austerity, and long-term procurement procedures. The startup has the jump on the state in this context.

Neo-unschoolers also embed the modes of thinking and doing held by coders in the very services that coordinate the interactions between citizens and civic services. This could be a fragile arrangement. The history of tech innovation is itself littered with failures. Software problems, miscodings and “hasty hacks” could give rise to “buggy, brittle” services, with potentially catastrophic consequences, as Anthony Townsend has argued. He has also demonstrated that most “civic hacking” events tend only to produce solutions to problems experienced by the very same people who create them: tech-savvy, well-off urbanites.

So, while neo-unschoolers and startup schoolers have some neat ideas, it would be wise not to take for granted the assumption that code or the systems of computational thinking that underpin it can fix everything. Neo-unschoolers justify their approach through the progressivist discourse of natural experiential learning, inquiry-based learning and other liberal ieals that are antithetical to contemporary mass schooling. But some are also driven by the desire to find new potential markets where low-cost startups can launch new technical solutions and attract venture capital. The nightmare of the state school as a disciplinary apparatus is replaced by the startup school as an angel investment. What kind of education might we be providing if it is put together through the “hasty hacks” of makers and unschoolers? What are we really getting if we start replacing state schools with startup schools? What might one little miscoding cost when startup schools start scaling up?