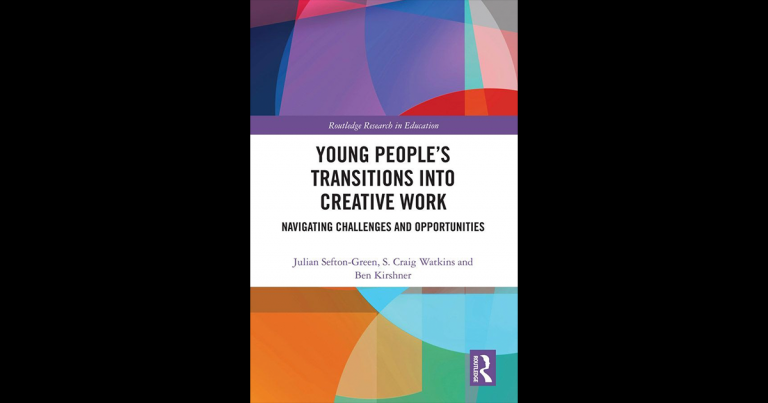 Over the last six or seven years the three of us were part of the Connected Learning Research Network finding out how young people in the US and the UK were using digital technologies at home and at school in a range of ways that were making us question traditional kinds of education and how we approach learning. Starting from different perspectives, (Ben is a youth development scholar, Craig one of media and Julian based in education), we were all doing research among and with young people from non-dominant and marginalised communities and who were frequently failed by the formal education system yet who were engaged in dynamic and creative productions in out-of-school settings. At the beginning we wanted to look at the new ecologies of learning springing up at school, in electives, in peer cultures and out-of-school settings but we kept on coming across young people who were taking these creatives practices – hip-hop, video or game design – and following these interests into paid work. Given that a huge purpose of schools and education systems is to prepare young people for the labour market, we realised that just focusing on the ways that digital technologies were changing ecologies of learning without thinking about the ways that these informal networks and new ecologies might be supporting opportunities into work or employment, was missing a trick.

This was the genesis of our collaboration, which has just been published as a new book: Young people’s transitions into creative work; negotiating challenges and opportunities. We started out wanting to write about the young people we had encountered in our early research who now, as they left their teenage years behind, were learning, building networks, hustling for freelance work in film and music, and hanging out in creative scenes in order to build careers for themselves based on their passions – what had drawn them into making, producing and designing spaces in the first place.

We were immediately faced with a problem. Employment in the creative industries is frequently insecure, is really difficult to get into, often is dependent on social networks – who you know – and often takes the form of intensive gigs mixed with long periods of “resting”. Furthermore, although there are college degrees and formal entry pathways into work in these sectors, often it isn’t formal qualifications that get people jobs. At the same time new technologies are creating new venues, new markets and new opportunities both as leisure and media industries are expanding – we look for example at the games sector around the creative hub of Austin, Texas – but also professional media making is now even more in demand – for example the young man we encountered in London who is being employed to use his professional skills to create seemingly spontaneous videos of music making to upload onto Facebook.

Where competition for employment is intense, social injustice is only further exacerbated. We focused, for example on half a dozen young black filmmakers in London all of whom had picked up work in a range of professional contexts – such as music videos – but who were unable to parlay their experience into further employment in film, or documentary. In other words, for all the new opportunities to create and make media and to belong to the new digital economies working at the edges of these changing marketplaces, traditional forms of discrimination effectively ended up boxing or limiting these young people’s careers.

Besides case studies of young filmmakers in London or hip-hop and young game designers in Austin, the book also considers the limits and possibilities of initiatives that are often offered to young people as routes into the creative industries. For example, in the UK the prestigious British film Institute runs a summer school for what it calls talented youth and tries to offer such opportunities to low income areas. These kinds of initiatives are often part of a larger policy discussion about the unjust representation of women and ethnic priorities who make media and as we all know the failure of the workforce in these industries to properly represent the diversity of the population as a whole can lead to blinkered output: where films, for example don’t tell the stories of all of us. Examining these well-meaning initiatives, both their promise and limits, shows the difficulty of reaching marginalised youth and the challenge in offering career routes into industries that are profoundly problematic, insecure and unrepresentative of the population as a whole.

That particular initiative also showed how the young people themselves interpreted the opportunity on offer focusing very much on building social networks which in the long term looks far more savvy strategic use of the summer course as it is indeed building a network of peers that tends to get you into these kinds of jobs. Other chapters in the book look at the differences between pathways offered by STEM out-of-school programs and those focused on mural art, video production, and photography. Similarly, in our effort to understand this unique domain of creative work, and key supports for young people as they pursue income and employment, with offer an inductive analysis of various types of guidance and mentoring that young people valued, in terms of what mentoring can do, how it should be structured, and in what ways practical advice can be turned into real opportunities.

The book fills a strange gap left between scholars of youth, scholars of work or labour, scholars of education and scholars of the creative industries. In all of these fields there is intense interest in what kind of people actually become the creative workers in these new creative industries. Yet there is very little attention and very little study paid to their incremental, step-by-step hustle, serendipity, persistence and resilience shown by young people as they try to carve out careers in a time when old-fashioned stable kinds of work seems to be disappearing. The case studies in the book are a testament to the ingenuity and commitment shown by young people as they pursue their creative passions. Educators, in school, college and out of school can learn from the stories and build a far more meaningful pathways to support and develop young people in their journeys to make new media, develop new art forms and create new representations of their world.