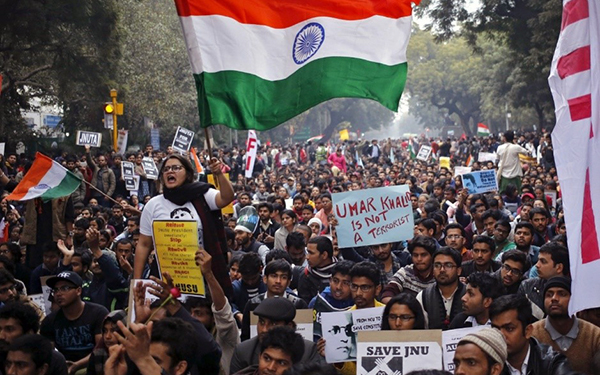 Politics of Hope is a dreadful thing. The cruel algebra of necessity kicks in, when you are contemplating the possibilities of the future — not possibilities for the future, but of even having a future — yet, the future is the only thing that you can aim for. The future, in many ways seems to be analogous to the digital. We cannot name it, can’t define it, can’t predict it, can’t explain it, and yet, we seem to be constantly touched by it, shaped by it, and when we see it, we know it. If my last blog was about the politics of despair and the emergence of #DalitLivesMatter as a hashtag that signals the impossibility of computing a future for those who are often shoved to the fringes of the contemporary university in India, demanding that our university be a university of intersections, the blog today is about the politics of hope, where I want to suggest that the intersectional university is not enough. It also has to be a space for encounters.

And, in order to talk of encounters, I need to take you through a brief but terse story of an alarming set of events that have unfolded at the Jawaharlal Nehru University (JNU), in New Delhi, India. The JNU has been one of the unrefuted premier public schools in the country, boasting an incredible lineage of students and alumni who have made significant contributions to intellectual thought in a variety of disciplines, but especially in humanities and social sciences. The University has espoused strong liberal, left-oriented, radical politics and has sought to question the abuse of power that overrides or undermines fundamental human rights. It is common, on the large sprawling campus of JNU, to find students sitting in small and big groups, at different canteens and open meeting spaces, engaged in passionate political arguments informed both by the material practices of governmental politics as well as the theoretical and philosophical debates that they take from their classrooms.

In such a campus, it wasn’t unexpected then, that a bunch of students, on the 9th of February, organized a small, non-violent protest meet to mark the death by capital punishment of Afzal Guru, who was convicted of terrorism charges for an attack on the Indian Parliament in December 2001. The case around Guru has been complicated, complex and entrenched in the fragile political negotiations between India and Pakistan over the state of Kashmir and various terrorist attacks in both countries, demanding independence for Kashmir. While the apex courts in India were convinced of Guru’s involvement in the terrorist attacks, it still came as a shock to many in the country that Guru was sentenced to death, and in fact the process was so hushed and rushed that he was not even allowed to meet his family and loved ones before the state execution. The meeting at JNU was commemorating a historical moment in the country, when many have questioned the existence of capital punishment in a democracy like India where the right to life and dignity have been enshrined as our constitutional rights. The meeting also had a political turn where the different students also had differing views about the state of Kashmir and the ongoing Indian interventions in that region.

The right-wing political body of students — Akhil Bhartiya Vidhyarthi Parishad (ABVP) — pointed out that the students who had organized this protest meeting had not been granted official permission by the university authorities and hence they must be reprimanded. The organizers cited their freedom of speech, voice and aggregation and maintained that the university could not curb their right to have political dissent. Even as the JNU administration was setting up a disciplinary committee to investigate into the nature of things, the Delhi police arrested Kanhaiya Kumar, the president of the JNU Student Union, on charges of sedition for his fiery speech at the event. Arnab Goswami, a lead TV anchor for a private news channel called “Times Now,” used a doctored video of the event to mislead public perception and suggest that Kumar was shouting anti-India slogans and inciting people for violence. The arrest of Kumar on trumped up charges of sedition — invoking a draconian law that holds its origins in oppressive British colonial regimes that had used it to punish some of the revolutionaries of India’s freedom fighters — sparked an outrage across the country, and especially on the university campuses.

Fuelled by sensational news media channels, irresponsible journalism, and vested political interests that sought to criminalize the students’ rights to political dissent, the arrest of Kumar and the question of what constitutes sedition became a hugely polarizing event with people on either side taking extremely strong positions. Predictably, these positions veered from calling for the death of seditious activists, misreading the right to question as an act of sedition (a charge that was dismissed by the court) and the alarmed cries of people who saw this as a sign of an emerging fascist state that was clamping down on free speech. In all these debates about what is a nation, what constitutes nationalism, and the increased intolerance toward any minority articulation or expression has pervaded the national news and public psyche in the last few weeks.

However, there is another discourse emerging in these very loud debates about the role of the university in a state of political crisis. One of the strongest critics of the entire arrest of Kumar and the subsequent events has been that the JNU is a university that needs to shut down because instead of offering education it offers political views to its students. There have been repeated opinion editorials that mark that these students who study on high state subsidies should stick to their learning in classrooms, suggesting that universities are not spaces for politics. An attack has been launched on the professors, students, and more than a 100 other universities across the country who have stood in solidarity with the events at JNU, culminating in a student led protest march with more than 10,000 students from across the country marching for their rights of political articulation. National debates have been hosted about the role of the university with participants suggesting that the only point of university education is to produce a literate and skilled work force that is in the service of the government’s agenda of development and progress. Citing the two massive campaigns of the current government — Digital India and Make in India, which are both premised on encouraging literacy and education to create a massive work force that can fulfil India’s development dreams, the university has been seen as an intersection point where the market and the state come together to find bodies that fit their economic needs and labour requirements.

As a response to these debates that suggest that universities should be hand maidens to the economic work force, we have seen the emergence of #StandWithJNU as a moment of reckoning. In the face of these demands that seek to turn the universities into production factories that can create cogs in the larger digital dreams of India, students, intellectuals, activists, professors, and liberal thinkers have come to use this hashtag to rethink the role of the university in the country. And, it is obvious that the language of intersections is not enough. The university, cannot merely be a meeting space where designed entities can come together in order to perform scripted functions contained by the government and the private sector. The university cannot be reduced to a network where different functional and transactional edges intersect on the body of the student, converting it into a node that has value only in its performing the task that the network has prescribed for it. While the university does have to encourage intersectionality, so that the #DalitLivesMatter activists have joined hands with #StandWithJNU groups, the university is not a designed entity where only these defined trajectories can meet. Instead, they are demanding that the university needs to stand for encounters — serendipitous, affective, unexpected, accidental, unplanned, ineffable, and inscrutable coming together of ideas, forces, perspectives, contexts, histories and experiences that shape the university in the future. The shift here is not about the university becoming sustainable in the future, but the university shaping the future itself, so that new origin points and different origin stories can unfold to form multiple futures, engendered by the politics of hope rather than the singular future that can only propel the politics of despair.