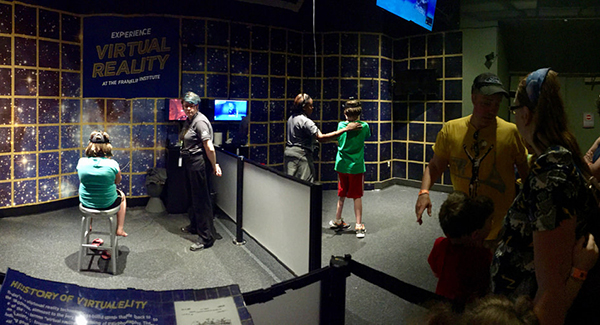 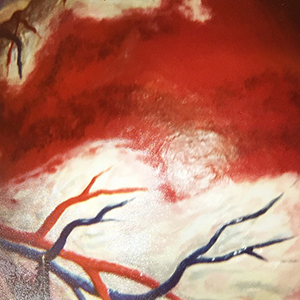 As a young child, I took this photo, of the Franklin Museum’s Giant Heart, my way of expressing my love for this immersive, interactive experience. A few decades later, last month, I returned with my colleagues, on a field trip from NYC to Philadelphia, to visit this venerable institution and learn how they’d been implementing their newest museum-wide strategy for immersive, interactive experiences, but this time using virtual reality. Led by Susan Poulton, their Chief Digital Officer, I learned that the future might be arriving sooner than expected and museums need to develop more agile practices with rapid prototyping in order to catch up.

Susan, why don’t we start by learning more about you. How’d you get to the Franklin?

When I started here two years ago, I was new to the museum world. I come from digital publishing — 10 years at AOL and eight years at National Geographic — creating online storytelling experiences for broad audiences. I got really excited about science and communication at National Geographic, which has always been my true passion as a science nerd. So, I was really excited about the opportunity to come and develop a digital strategy for a science brand well known locally, but doesn’t have much of a national and global presence.

How old is the Franklin Institute?

The Franklin Institute was founded in 1824. We’re almost 200 years old. It was founded as a science and technology learning institute, like almost a technical college. And, the museum opened in 1932, here in Philadelphia, and we’ve been in this location ever since.

How do you begin to think about bringing digital learning into an institution that was founded before electricity was even invented?

The fun thing about the Franklin Institute is that its mission has always been to inspire learning for science and technology. As a result they’ve always been at the forefront of all of these new experiences as they were launched to the public. So, when electricity was kind of a new thing, the Franklin Institute did an entire exhibition on electricity to showcase it to the public in all of its wonder. It was almost a carnival, World’s Fair-style exhibition where the public could experience what electricity could do. And, we sort of continued that tradition with the observatory, with the planetarium. The Franklin Institute was the first place that a movie camera was demonstrated. It was also the first time live television was ever broadcast; the first sporting event ever broadcast on live TV was played on our front lawn. I’m not exactly sure who played whom, I think it was probably a Penn game. We’ve always been at the forefront, so this is really about taking that spirit and applying it to new and emerging digital technologies.

So, what is the new emerging technology today that you are introducing to the public?

Last October, we created a broad-based, virtual reality strategy that was built on top of a mobile app. The goal of both was to push what museums were doing in both of those spaces, to start to think about mobile technologies, virtual reality, augmented reality, and mixed reality, including things that the public has not adopted broadly, and ask: How can museums be part of that?

Let’s expose the public to these technologies, get the public interacting with them, and get feedback about those experiences. And, let’s learn about how they can enhance the museum experience at the same time. I think museums tend to adopt things very slowly. In the technology world, it’s all about experimentation: try, fail, see what happens. Museums tend to take a much more academic approach to how they do things.

When you are talking about media and communicating to the public, the public is now moving at a different pace. The entire industry is now moving at a different pace, and it’s my personal belief that museums can no longer follow this rigid academic approach to testing technologies.  We have to get more comfortable with just raw experimentation and prototyping much, much more rapidly than we have in the past.

What have you been prototyping recently?

There are virtual reality enthusiasts, or people with Google cardboards, or teachers who had download a set of nature-themed, or science-themed experiences, and have a library of that at the ready. But, I think, for everyone else, virtual reality is a bit of the Wild West right now, as far as content is concerned. It’s interesting — when a new technology comes out, we cycle back to some of the old ways, like with constant curation. That ship has sailed on so many other platforms, but it’s absolutely necessary in virtual reality, because right now we are just making content and organizing it, distributing it, going back to some of the basics. Content curation is really needed in the VR world. It’s not needed in the news world, or whatever people are using Facebook and search for. But, right now, in the VR world, people are really confused. They want people to just tell them what the good content is. “Here it is. We vetted this.” I think that was our goal in the virtual reality library in our mobile app.

And, then, we carried that out with an on-site experience, which is really about exposing the public to all the different virtual reality technologies that are currently available in the market.  We have an Oculus Rift and a HTC Vive. We have device-based experiences that are thematic. You can just watch 360-degree videos. You can watch immersives, interactives on the Samsung Gear VR.

It sounds like you are describing an experience for visitors before their visit, throughout the museum during their visit, and to take home after their visit.

All of these different experiences explore all the different ways visitors can encounter VR, and allow us to see how it goes.

I think probably most museum educators will be horrified by how I’ve implemented this, because we don’t have protocols. I set up parameters, we just did it, and we’re sort of anecdotally responding to the feedback.

What kind of feedback have you been receiving?

Visitors love it.  They really enjoy engaging in it. The biggest thing that I think we’ve discovered is that most people just have never experienced VR in any format like Google Cardboard. So I think a lot people like myself who are involved in digital assume that the public is far more exposed to it than they actually are. And, when you think about the behavior sets of people who are going to try virtual reality, a lot of the resistance we got was, “You can just go demo this at the mall.” Well, people have to self-select for that, they kind of have to opt in to “I’m going to go to the mall. I’m going to go to the Microsoft store. I know what a HTC Vive is, so I’m going to stand in line to try one.” This is a certain type of person. It’s the early adopters. It’s the people who are probably aware of VR.

What I’m trying to do is put VR in front of people who came to a science museum, and just looked over and go “What the heck is that?” And, then gave it a try. So, it’s introducing virtual reality to new audiences that are not the sort of hyper-aware early-adopters. What you find is people are really excited by it; even the very, very simple experiences really light them up. And, some of the experiences I thought would disappoint the public, they love. I think 360-degree video has been around for ages, in my opinion. I see it on Facebook all the time. I’ve tried Google Cardboard compared to what you can do in a HTC Vive. Then, you see somebody try a device — you know a mobile app-based 360-degree video — and they freak out. They think it’s the coolest thing they’ve ever seen.

And, so it goes to my lifelong philosophy that a focus group of one, myself, is a really terrible focus group.

As an educator myself, of course, I agree that other educators might not be happy to hear that there’s no education objectives connected to these experiences. But, why not? When do we get to see those incorporated as well? You will not only learn about visitor engagement, but also the kind of learning being achieved along the way.

I don’t think our experience is really designed for that. I have heard about virtual reality experiences that are being specifically created to see how VR affects the learning process. I’m not sure that will ever be one of our objectives. I’m more interested in how the public reacts to the technology. I’m more interested in exposing the public to the technology.  I think we will probably learn from others about how it affects the learning environment. Virtual reality is a serious challenge in those experiences. Throughput is big — you know, if you’re going to put someone through a meaningful learning experience in virtual reality, it’s extremely hard to do that in two minutes or less.

Is it fair to say that you are currently content agnostic, as long as it’s about science, and you have no specific learning objectives connected to that learning of science?  I do see you have learning objectives around teaching people what VR is, and offering them a context for understanding the VR they’ll experience after they leave the museum.

Right. And it might not be teaching people about virtual reality so that they walk away with specific knowledge points that they’ve gained about VR.  It’s exposure, to the medium, exposure to what’s it like to have a 360-degree visual moment which you can explore, and how it can light people up with wonder. Again, I think there are experiences that we do, and museums should do, that measure outcomes, and then there are experiences that are just for the sake of experiencing.  I think it’s a balance of both.

And, I think one of the challenges that we have in museums is, because it’s unmeasured and untested, we don’t do it. I think that’s a shame, a loss. I think museums have to get over some of these self-proclaimed barriers that they’ve put in place to using technologies. I hear this a lot. “We don’t know what its learning objectives and the impact are, so we haven’t adopted it yet.” I was like, “Well, quite frankly, by the time you figure that out, it won’t exist anymore.” It’s the truth. This is the pace at which technology development is happening now. If Moore’s law holds true, I mean, we’ll be down to every two days; we’ll be inventing something completely new, and everything will be out the window. We have to adapt our educational methodologies, for lack of a better term, to a process that involves rapid prototyping.

Also, the public expectation is changing. The public is going to expect that museums have these experiences. Their tolerance for museums being digitally behind will eventually wane, and that will spell trouble, I think, for museum visitorship.

Do you have any other advice for museums that are thinking about bringing VR or 360 video to their visitors?