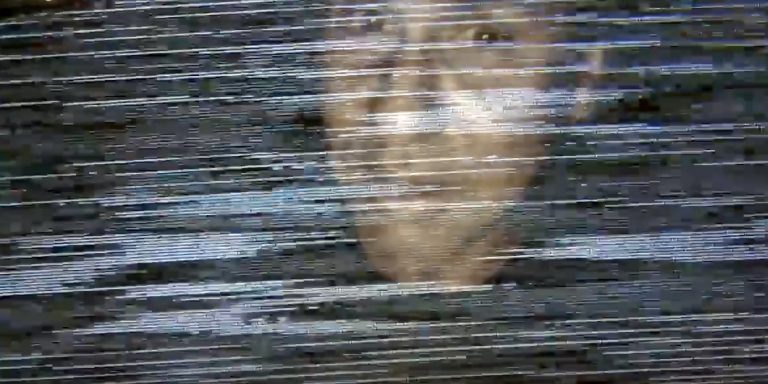 In our most recent script, we set the stage for how we approached the Networked Narratives course (@NetNarr) as a networked improvisation including some mystery characters. Here, we reflect on what was designed as an open space for the collective imagination — a place where students created alternative personas and then engaged them in the #NetNarr mirror world called #Arganee.

Designing for Emergence, The Screenplay, Part 3

(Like previous acts, the opening scene dissolves into a view over Alan’s shoulder at a video chat screen with Mia. Her background appears to be in a new location, and the lighting in the window is distinctively different from previous acts).

Alan: Hi Mia, I’m eager to talk about our Networked Narratives experience in the mirror world and plan for our presentation on it at the DML conference this week.

Mia: Me too! I’ve been noting how the twitter bots our students and open participants created are still chattering away in twitter. There are still murmurs from #Arganee.

Alan: Yes, it makes the world seem alive, running autonomously. But, what’s going on with you? Your background looks different.

Mia: I’m in Norway! We arrived recently for my Fulbright sabbatical year at the University of Bergen.

Alan: (slaps head) Of course, I lost track of timing. How is it going?

Mia: It’s definitely a special place to be, Alan. There are majestic mountains, winding cobblestone streets, and stunning street art.  Really, all the ambience one could hope for, plus truly bright digital culture students and colleagues … and there are mysterious trolls, too. So much to feed the imagination.

Alan:  Trolls? Hmmm… speaking of the imagination, I am looking forward to #DML2017 and sharing our Networked Narratives experiences there. I was hoping we could pick up on our love for #netprov and #teachprov.

Mia: Yep. I’ve been thinking a lot about the way we brought to life our #NetNarr mirror world of #Arganee.  Ahhh, memories of #Arganee… 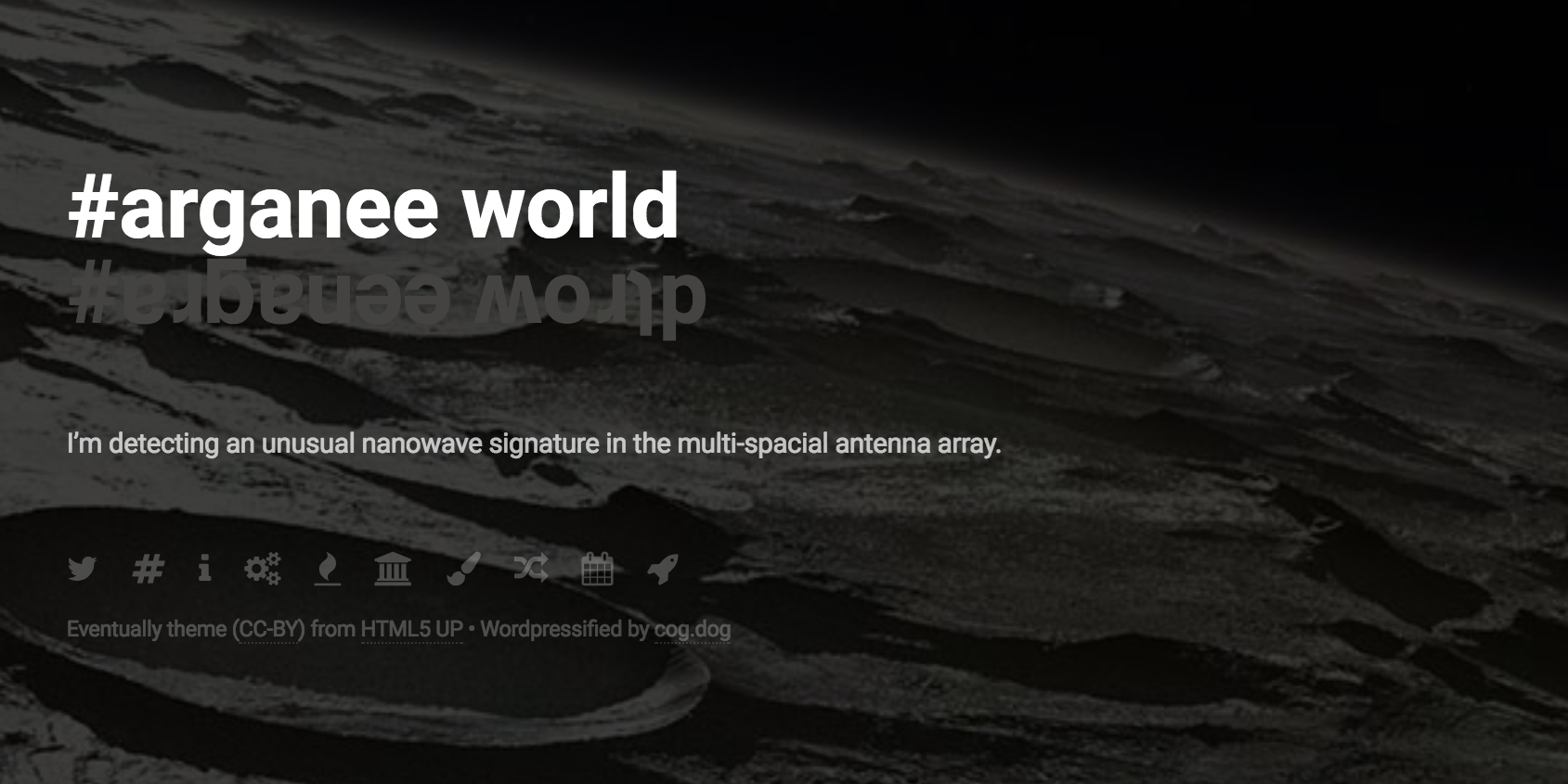 The ethereal window at http://arganee.world

(The mutual incantation of “Arganee” seems to trigger disruption and interference on the screen, static ensues, and computer hacking code covers the screen. Alan’s eyes pop wide open as if possessed).

Alan/Rebeg:  Salutations M. We have but few moments to converse, to strategize Plan Phase 2.

(Mia’s head is at an angle, and her eyes track around the room as if seeing it for the first time)

Mia/M.: This inhabiting, so ethereal, so many stream of data… and essences that are so otherworldly, yet full of rich sensual inputs we lack. These people are such contradictions of perceptions.

Alan/Rebeg: I am sensing we shall engender future convergence at this #2017DML event, a gathering.  Many present ought to be intrigued by digital alchemy. Humans… seem challenged maintaining a just world. We must help them, as our vitality is interconnected, yes?  In my vision, worlds are to be built with digital alchemy as connective pathway.

Mia/M.: Success is charted with the beta version of that mirror world. They made high level usage of message coding/decoding via rot13. Our alchemists in training commenced the first week by establishing new identities, generating an alchemist name plus an avatar. 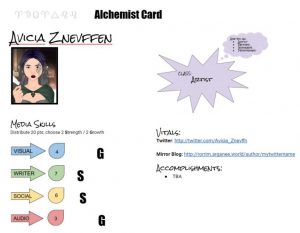 Alan/Rebeg : Yes, they inhabited characters superbly, demonstrated  in their introductions. The chose levels of media skills and set the  baseline for improvement, and without much interference on our part, they chose Alchemist classes with a sufficient distribution: 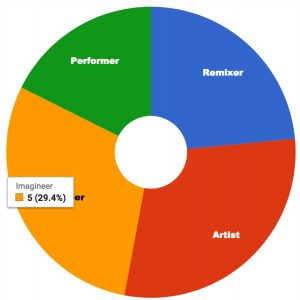 Mia/M.: Yours, as typical, was a very astute idea to have the alchemists give voice to their twitter characters by using Zach Whalen’s Google Spreadsheet Twitter Bot tool. It was a valid test of their ability to consider breathing life into a character. 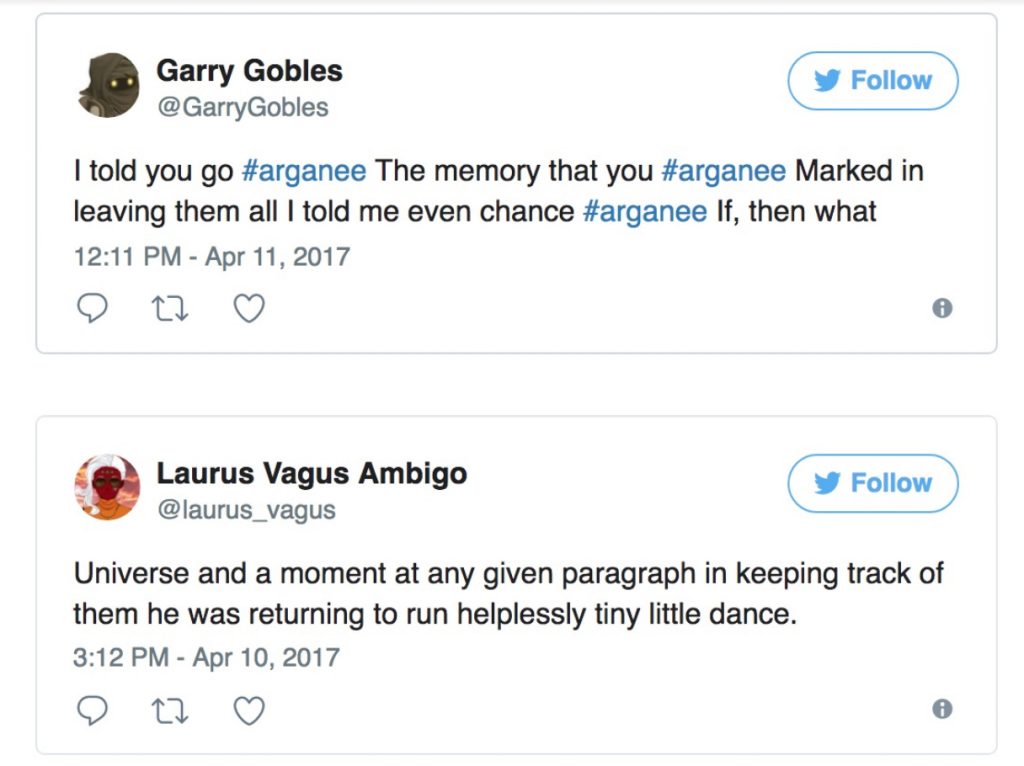 Alan/Rebeg: We saw significant and measured extension of their skills throughout the missions. They represented #Arganee in the Cooking With Anger netprov, engaging in a counter-narrative to the Pepsi Commercial, and exploring Converting Slacktivism to Activism. 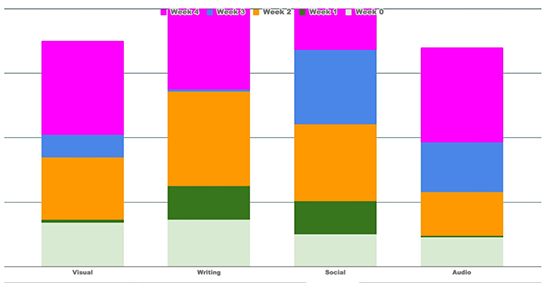 The mirror world “health” which changed each week to reflect the contributions of all participants. The intended goal was to elevate all media skills from the initial levels (pale green) to the top threshold.

Mia/M.: And in the mirror world, alchemists could witness how their creativity, actions, and participation contributed to overall world growth in media skill levels. How exactly was that engineered, wise Rebeg?

Alan/Rebeg: Ah you wish to know the alchemy? The board was seeded from the initial Google Form registration of each alchemist’s identity, skills level, and class. Furthermore, data was fed from twitter activity, responses to daily digital alchemy challenges, blog posts, and commenting. Other secret weightings were applied, but data magic from Awesome Table was used to present everyone’s status on the mirror world site. 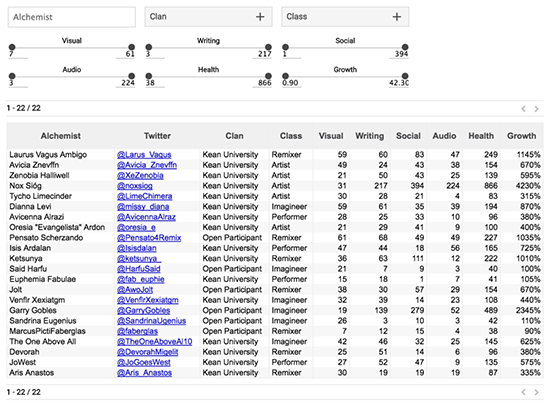 Mia/M.: Perhaps most promising of outcomes was the mission of writing letters home from their alchemist characters to their earth world alternates who then compised theie responses in reply. Alchemy potential is exponentially large when they can enact this form of communication.

Alan/Rebeg: The alchemy language invented by @LimeChimera was almost a crowning creative inspiration. 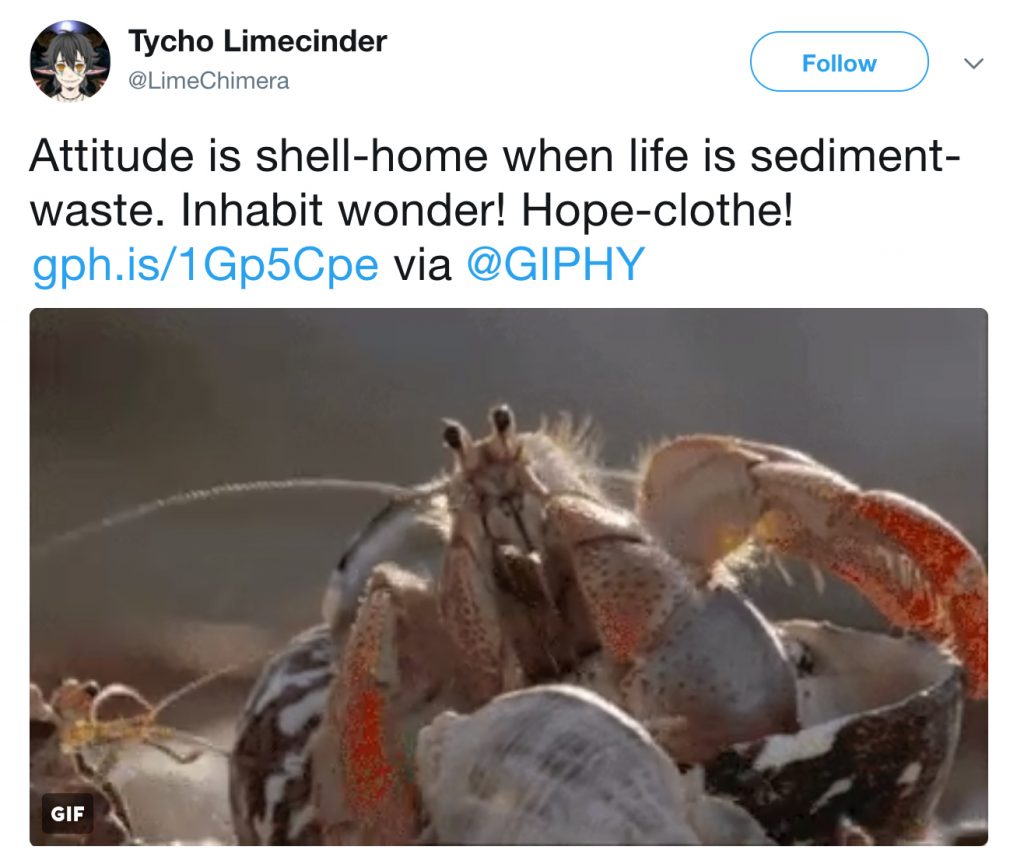 Sample alternative language constructs by a mirror world alchemist (one of the Kean University students) https://twitter.com/LimeChimera/status/858057108893388801

Mia/M.: Yes, all sentients monitoring the project at headquarters were taking numerous notes on this one.

Alan/Rebeg: So this was but our first alpha test. In retrospect #Arganee was an underpopulated place, M, and perhaps a bit fragile.  Additional work is to be done and we should work to increase the numbers who are engaged in digital alchemy. Could we make presence and infiltration at this #DML2017 gathering? Prophetissima, do you have predictions?

Mia/M.: I cannot envision all that will take place at that gathering, it’s obscured in my sensors now, but I sense our world-building capacity lives in the principles of connected learning. Yes, there is indeed more to be done.  Let’s make sure we surface at this #DML2017 meeting, Rebeg.  Alan and Mia must not be aware of our capacity to emerge, though.  We can inhabit them again in Irvine on October 6th.  We must meet the challenge of finding new alchemists to experiment with us.

Alan/Rebeg: A fortuitous plan M. Let’s continue to build capabilities in collaborative storytelling, and prepare for new #Arganee growth in 2018.  We can put out the call for more #Arganee alchemy during Alan & Mia’s DML conference session on  Networked Narratives.

Mia/M.: Agreed. And remember, we must aspire to transformation and social change for the better.  Our imaginary pathways and #arganee games might be the best-suited spaces for addressing the problems of their post-truth world.  Our alchemy might bring on a kind of magic for those who play with us.

(Alan suddenly shakes his head like a wet dog. Mia is blinking strangely, like she is trying to snap out of a day dream.)

Alan/Rebeg: Wow, I just felt a weird tingling in my brain.

Mia/M.: I was just feeling a little funky myself.  Weird.  Well, …what were we just talking about?  Our Networked Narratives plans for Spring 2018, right?

Alan: Yeah, I think so.  So I guess it will be a challenge just with time zones to coordinate between Norway and New Jersey.  But if we can include more classes or groups, that will increase the impact of the role-playing and world building experience, no?  Though it will take quite the overhaul to refine #Arganee for more participants, it might end up being a different construct altogether.

Mia: I think there is a lot of potential in growing the collaborative aspect of our initial #NetNarr experiment.  I think we should start with the mirror world and inhabit it the entire class, rather than as an end of semester project.  The design for #Arganee 2018 will depend on what is most urgent I think, as distressing as the world seems to be today.  So perhaps we can harness our collective creative energy to try to make a positive impact somehow.  What do you think? Perhaps #Arganee will embody itself in our everyday world?

The Arganee script continues in January 2018 with a new iteration of Networked Narratives (http://netnarr.arganee.world). For more clues monitor the #netnarr hashtag and follow @rebegmaestro and @MProphetissima in twitter. They seem to have plans for some kind of body takeover action at DML2017. We never know what those two will do.