I’m not teaching a class this term.  I’m doing something lots harder.  I am making a collaborative, peer-led experience available to students.  There are six of them: three graduate students, two undergraduate students, and one recent alum.  There is no syllabus.  As part of HASTAC and the Digital Media and Learning Competition, my semester has been full of exciting opportunities so I wrote an open letter to Duke students inviting anyone daring enough to join me for a peer-created collaboration to build projects around these events.  I wanted to share the wealth and turn it into pedagogy.  I’ve never done anything like this before so I wanted to handpick the participants in what I call a “Tutorial in Collaborative Thinking.”  I had about two dozen inquiries; if the word “grade” or “requirements” came up in the email to me, I knew the student was wrong for this experiment in independent, self-guided group learning-by-doing.  The six who were bold enough to join have dubbed themselves FutureClass.  They created a class website and even co-created their own logo.  If you’ve never co-designed a logo with six people you don’t know, from different backgrounds, different ages, different kinds of expertise, well, let me just tell you it isn’t easy.  They pulled it off, too.

Nothing about FutureClass has been easy.  To begin with, Duke doesn’t really have an institutional category for a six-person group independent study that crosses graduates and undergraduates and alums (including a doctoral student at UNC too), and in the humanities, social sciences, and sciences.  After an exchange of something on the order of a gazillion emails, a department chair (name omitted to protect the implicated) went out on a limb and just signed the form making this anomaly a reality.

When the class began, we didn’t know that several of us from HASTAC Central at Duke would be invited to come to the first international Mozilla Drumbeat Festival on Learning, Freedom, and the Web as a “space wrangler,” someone charged with running a whole tent at the Festival and coming up with two and a half days of continuous activities, programs, interactive experiences for something like 500 attendees.  We called our tent “Storming the Academy,” and translated the lessons of peer-to-peer collaborative webcraft and open learning to traditional higher education.

Soon, FutureClass was raising the funds to get to Barcelona, won scholarships from Mozilla, and they were also running their own two-and-a-half days of programming within the HASTAC tent.  That meant switching from intellectual readings in Benkler or boyd to activity creation and product development in time for Drumbeat.  No one bargained for that and, again, it wasn’t easy to turn six very different people on a dime.  But they did it. 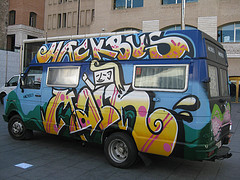 At the opening Science Fair, they debuted their Low Tech Social Network, where anyone could put up a Post-it note with a name, an interest, a collaborative idea, and anyone else could put up another Post-it note and draw a connection.  The Post-It Network became a magnet throughout Drumbeat Festival, with people returning over and over to see who had linked to them.  FutureClass’s idea was: we know how to meet people online, drawn to one another by common interests, but often at conferences we simply hang out with people we know already, reverting to our old habits rather than transferring the Web’s lessons to everyday social life.

FutureClass also debuted an open source mobile app that affords a real-time opportunity for anyone who doesn’t understand or who is too shy to speak up a chance to have a voice.  Initially, they discussed the app together, and then, one student took the lead on developing with a friend.  The tool began as the Classroom Attention Barometer and morphed later into The Feedbacker, a group tool that could be useful on a large international conference call, in a lecture class, or in any situation where it might be intimidating to admit when one is confused or bored or lost.  In a collaborative exercise, they came up with various clever taglines:  “The Feedbacker: Mic’ing the back. So your feedback is more than noise.”  The Feedbacker was one of five tools selected by Mozilla for further development (along with two other tools by interactive media and communications Professor Anne Balsamo featured in the Storming the Academy tent).  And, FutureClass has lots of ideas about what it could do, how it could break through the one-to-many format of the lecture and allow a real dialogue and real-time assessment, and how social networking features could be added so it could also be archived as a study guide for the participants who could co-create a learning community around it.

Sound easy?  Nah.  There were tensions and disputes that sent us to reading articles about intellectual property, group collaboration, and the remarkable Mozilla Manifesto.  “Individuals must have the ability to shape their own experiences on the Internet” is one tenet.  “Transparent community-based processes promote participation, accountability, and trust” is another.  That sounds utopian; in practice, it can be a struggle.  And struggle we did, as a peer learning community, about what it means to co-create an open source tool that starts as a highly abstract conviction voiced in a class and is turned into an actual tool (with a relatively thin connection to the original idea) by one member of the class and a friend, and then is released to the entire Mozilla open source community to be changed, developed, added, revised, reformed, renamed, recoded, re-tooled.  The issues the process raised were profound ones, not only about ownership but about the very significance of tools in pedagogy:

After something like 500 emails, FutureClass has grappled with just about anything one can imagine.  And, since introspection is one of our purposes, we’ve been doing this as publicly as possible: on the FutureClass site, on the HASTAC site, and on a website created by one of the doctoral students (in Communications at UNC), Jade Davis, who also filmed many of our interactions and is editing those into a video ethnography.  Her interactive field notes are candid about conflict and its resolution as the basis for peer learning.  She writes candidly about how difficult co-creation was at times, and how honestly and deeply students had to deal with one another.  There were outbursts of irritation, frustration, confusion — and also great caring.  Over and over, lessons were learned, not from a teacher, but from one another.

As I’ve blogged elsewhere: “I have been through hundreds, maybe thousands of meetings in my life, and I cannot think of many where individuals dealt with one another with greater honesty, candor, frankness, criticism, appreciation, sensitivity, respect, and, I’ll say the word:  love.”  As with all collaboration, this one may well prove to be even more invaluable the next time, than it was this time.  When you learn by doing, you build not towards the last challenge but the next one.  Like all game mechanics, losing a challenge is never losing.  It may seem difficult at the time, but it is the only way to prepare you for the Epic Win that always, ever, lies just ahead.