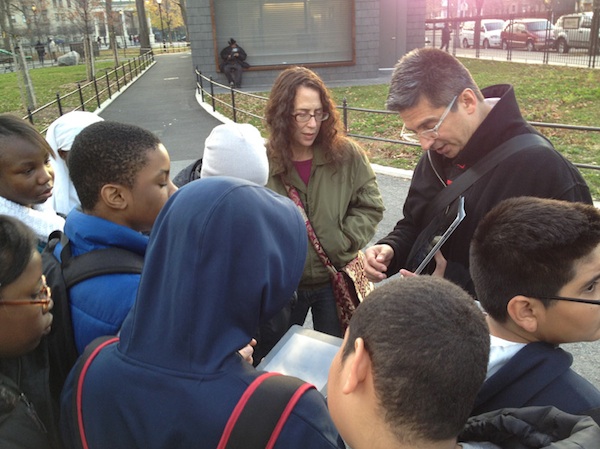 Professor of urban planning, Amy Hillier, recently spoke at TEDxPhilly to talk about how data visualization technology can map a city’s emotions and memories. Geographic Information System (G.I.S.) technology has become more commonplace and allows statistics to be easily mapped, but in this article, “Mobile Technology: Mapping a City’s Emotions, Memories,” Hillier argues that we can go one step further. By using data visualization to map the city that isn’t visible to the eye (i.e. sewage system, water pipes, and other underlying infrastructure), it can be used as an experiential tool. She gives an example of two children living in different neighborhoods whose experiences can be quantified by mapping where they eat, where they go for entertainment, and average household income. The hope is that using the technologies in this way can change our environment for the better.

Occupy LEGO Universe is a day for players to “occupy” a certain location in this virtual world. “The story line of the game takes on new meaning as players shift from the imaginary fight to save creativity to a very real fight to save LEGO Universe from a bad economy,” writes one teacher involved. “In a truly grassroots effort, young activists are turning to social media tools to communicate, organize, advocate, debate, offer creative solutions and take action.” The project is also collecting protest videos from around the world. “It’s not just our imagination,” says one child in Britain, sending his plea from his bedroom out through his computer. “It’s our youth’s future.” When you watch a video like this, it is hard not to see youth’s passion for gaming, the conflicts that can occur when youth invest their time in commercial spaces, and how these passions and interests can lead to civic activities. To learn how educators have been thinking about and using this play space to support learning activities, check out this thread on Global Kids’ RezEd.

What We Learn From Open Source (video)

In this TEDx talk Steve Fisher discusses the importance of open sourced technologies. He presents the concept of being open sourced as a different culture of learning, in which collaboration is the means to solve problems and how this is demonstrated within the online community. He cites Wikipedia and Drupal as examples of communities in which these free products, created by volunteers, are competitors to proprietary options. Being open sourced, they are able to grow and upgrade at a moment’s notice in order to provide the best service for its users. He makes a point that open source is not just about using the product for your business or personal use; it is about what you can contribute to the community and how that can be used as an approach to learning.

The Pew Internet and American Life Project has released a new report on teens and social media. Not surprisingly, eight out of ten teens use some kind of social network site such as Facebook, MySpace, and/or Twitter, with Facebook dominating teen social media usage. Also not surprisingly, the report found that most teens use social network sites to send instant messages and chat with friends. However, some other interesting findings from the report have to do with what teens are experiencing when they go online, especially in the realm of bullying and privacy. For example, the report found that:

Useful for us at Global Kids are the findings about online privacy and bullying. Examining how youth respond to bullying or sexually suggestive images can help us more effectively address concerns about how to be responsible online citizens. Equally important is contextualizing these concerns within data that paints a broader picture of youth acting in a civic manner, standing up against bullying, and having an overall positive and beneficial experience online. Finally, as educators, it is always heartening to hear that 70% ask for advice from the educators around them and, overall, “92% of those who asked for advice say that the advice they received was ‘helpful.’” We adults still matter and the youth we reach need our advice as they struggle to learn how to live in our new digital age.

While much attention has been given lately to the negative effects of multitasking, a new way of looking at the subject is discussed by Cathy Davidson, co-founder of HASTAC (and a fellow featured blogger here at DMLcentral), in a podcast interview by the Harvard Business Review. “There is no evidence that we’re actually juggling more now than we did in the past,” Davidson asserts, “either as individuals or as a society.” Farmers, for example, had to multitask to survive. In addition, because the mind can’t productively concentrate on one task for more than twenty minutes, small distractions or breaks by switching tasks are refreshers for the brain. If we think technology is making us more busy, and more dumb as a results, then “we should be insisting that school stay exactly as stultifying, bubble-tested, standardized, and hierarchical as it is now.” Rather, Davidson argues, we need to recognize that the reason we feel so “distracted and disjointed” is not due to technology but, rather, the “mismatch between the educational institutions that help to form us and the changed world in which we live.” Ultimately, Davidson is arguing for institutional change that recognizes that “Multitasking is a way of life, and disruption is what saves us from our own attention blindness.” The same topic is explored in-depth with a new article in Scientific American. Focusing on the game Starcraft 2, the writer asserts that “Video game research has reached a turning point: At least in some cases, gamers are being recognized for the specific forms of learning they cultivate, with the data trail that could finally unravel some of the major mysteries of the human brain.” And in this case, with Starcraft 2, the learning is multitasking, and the massive documentation provided to players is now allowing researchers to create, “the world’s biggest experiment on how expertise develops and, ultimately, on how we learn.” They are asking what we can learn from hyper-specialized multitasking gamers and if those skills, which most often resist improvement through training, can prepare the next generation of, say, disaster responders and others working in a high-stress crisis situation. Here is a video that has been watched tens of thousands of times just this week demonstrating the extreme skills being developed amongst Starcraft 2 gamers:

The new landscape for civics and politics (presentation)

Lee Rainie, Director of the Pew Research Center’s Internet & American Life Project, gave a recent keynote address about the new civic and political landscape. He discussed the changing civic and media environment created by the rise of broadband, social networking sites, and mobile connectivity. This slide deck highlights his key points and is worth a quick flip for anyone interested in the the use of digital media to engage youth in civic activities.

Global Kids does a great job each month flagging important resources; Joliz Cedeno, Daria Ng and Juan Rubio contributed to this month’s list. Please share what you’re reading and watching, too! Global Kids’ NYC-based programs address the need for young people to possess leadership skills and an understanding of complex global issues to succeed in the 21st century workplace and participate in the democratic process.