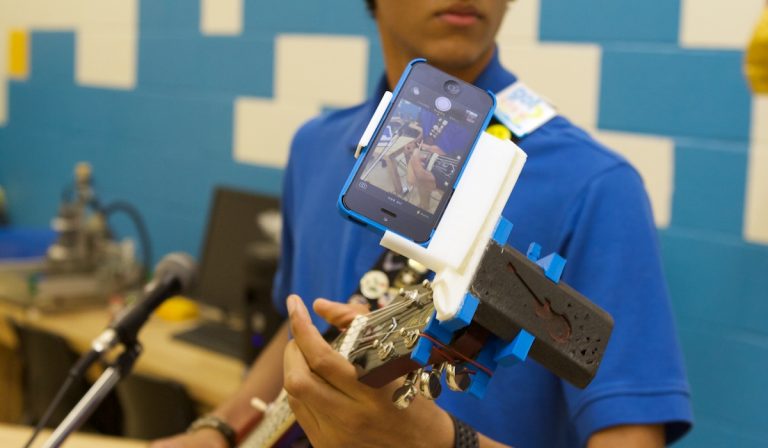 The Beam Center in Brooklyn is an out-of-school maker program that teaches teenagers technical skills like welding, woodworking and microcontroller interface design; they collaborate on a range of cool projects from mushroom fruiting environments to giant, hand-cranked flipbooks. But perhaps the most important skills kids learn at Beam are empathy, communication and self-expression. “When we have 23 kids from seven different ethnic backgrounds who speak seven-plus different languages, we experience some tension in our space,” says Beam Director of Teen Programs Calvin Stalvig. “We have the opportunity to establish a community where youth feel safe to be around one another, to talk about things that are challenging them, to talk about being from another country or struggling to learn English or being gay or trans.”

Beam’s emphasis on youth development in conjunction with technical learning is one reason it was chosen to partner in the collaboration behind the recently published Reclaiming Digital Futures toolkit. The free web-based guide is designed to help educators at out-of-school youth organizations leverage five strategic areas to integrate technology and digital learning into their programming and practices. One resource in the toolkit, for example, explains how to incorporate digital tools that align with an organization’s specific goals.

The project’s partners—which include the Susan Crown Exchange, researchers at University of California Irvine and New York University, and eight exemplar youth-serving organizations, including Beam Center—gathered for three “digital learning convenings” as well as several group digital meetings and multiple individual onsite visits over an 18-month period. Their goal was to share best practices and “explore important questions about what it means to be a 21st-century citizen,” says Susan Crown, founder of the Chicago-based social investment organization that funded the project. “We wanted to understand more about preparing youth for the changing workforce, and for civic participation.”

The eight exemplar programs each focus on different subjects, from arts to engineering to journalism, but they have a few things in common: They all integrate digital learning and 21st-century skills into their practices, and they are all deeply rooted in their own communities, many of which are marginalized neighborhoods. “A lot of times when we think about technology or digital learning, we tend to start with the technology, the hard skills,” says June Ahn, an associate professor of education at UCI and the project’s research lead. “With our partners, it’s not an either/or question,” he explains. “They all have nicely developed youth development practices that coincide with their technical programs. They focus on building trust with young people. They help them find their passion and help them deal with daily challenges and trauma. Those kinds of things are just as important as infusing digital learning into projects that are really relevant for them.”

Every year the Beam Center tackles a massive maker project based on designs from an international call for entries. This year’s project is a set of giant hand-cranked flip books that will be displayed in Brooklyn’s DUMBO neighborhood. Expert metalworkers on the Beam staff break down the large project into small projects that individuals or groups of students can create together while learning about animation, woodworking, metalworking, kinetics, solar power and storytelling. There are also smaller projects going on at any given time that teach similar skills. This spring Beam students are learning about mycology while creating fruiting environments for mushrooms. Stalvig says he could swap out mushrooms for hip hop music and the kids would be learning a lot of the same things: how to use digital as well as old-school tools, how to collaborate, how to plan a project and see it to completion. “Only the conversation will be different,” says Stalvig. “And the conversations always relate to—how does this connect to your life? How does this connect to your community? How does this connect to social justice?”

To help bridge potential divides among his students, Stalvig created a slideshow he called “Five Minutes of Me”—and shared it with his students. With the help of 27 pictures, from old family photos of his hometown in Wisconsin to pictures of him and his husband on their honeymoon in Iceland, he told his students who he was. Every week thereafter, different students would make five-minute presentations about their lives. “When I—a black, gay man from northern Wisconsin from a white family—do that first, I model that I’m not ashamed of any single part of my identity,” says Stalvig. “Five Minutes of Me” doesn’t just help students with public speaking and other career-readiness skills, “it helps them celebrate who they are and helps them find an audience that will listen to them. Afterwards, they ask each other questions like, ‘What is your favorite anime manga comic book?’ Then it changes the whole tone of our space, and they quickly care for one another in ways that they’re not able to care for one another in their schools because of the divisions of class, race, gender, sexuality, etc.”

A commitment to human dignity and expressing oneself are also central to the mission at Free Spirit Media (FSM), a journalism-focused exemplar organization where kids from mostly low-income and minority backgrounds in Chicago produce a thousand pieces of media content a year. At FSM, kids don’t just learn how to identify good local stories and how to operate cameras, microphones, and editing programs. “They make media content that is intended to contribute to the civic discourse by reaching an audience and starting meaningful conversations,” says founder Jeff McCarter.

Along with technical skills, kids learn things that foster, as McCarter puts it, “interpersonal fluency”—such as media literacy and personal accountability. At the beginning of each new program cycle, students brainstorm a code of conduct and write it on a poster that everyone signs. “If somebody were to show up late and something is on there about tardiness, a peer is likely to say, ‘Hey, you signed on to this. You need to do better,’” says McCarter.

As they gain experience and move through the five program levels of FSM, students get opportunities to earn money with their skills while telling stories that are relevant to them. The short film “A Tale of Two Cities” was created by advanced FSM youth as a commissioned companion piece to “Romeo is Bleeding,” a poetic documentary about Richmond, CA. In Tale, young people from Chicago’s North Lawndale neighborhood, a mostly black, mostly low-income community, talk about how their neighborhood is perceived from the outside—thanks to a steady stream of media reports of violence and police activity—and how they know the neighborhood from their own personal experiences. The FSM students hashed out ideas, set up a series of shoots, worked on their script and voiceovers and captured archival footage from both outside media and Free Spirit’s archive. They then produced a beautiful and moving four-minute piece that was shown as the opener to a Chicago screening of “Romeo.”

That commitment to mining the assets of the local community—whether it’s story material or expert advice—is “a really important flavor to this project,” says Ahn. “We’re not just talking to partners in highly-resourced areas; we’re talking with partners who work in low-income communities and build from assets in those communities.” Determining how to spread the rich practices highlighted in the Reclaiming Digital Futures project to the communities that could most benefit from them will be an ongoing process, he adds. “That equity agenda is important, and it’s something that we’ll have to continue to work on.”

Adds Crown, “One thing we know for sure; kids with a sense of purpose, a sense of competence, and a sense of community fare much better in life than kids who lack these three things. Technology offers remarkable new ways to cultivate these qualities in kids.”

This post originally appeared on Edsurge and has been cross-posted with permission.