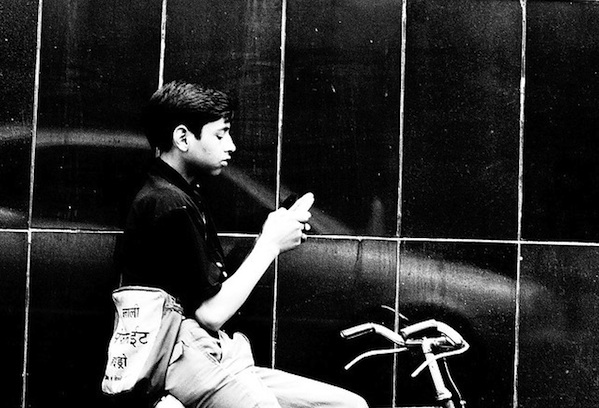 In my last post, I talked about techno-euphoria as a condition that seems to mark much of our discourse around digital technologies and the promise of the future. The euphoria, as I had suggested, manifests itself either as a utopian view of how digital technologies are going to change the future that we inhabit, or woes of despair about how the overdetermination of the digital is killing the very fibre of our social fabric. A way out of it, for some of us working with young people and their relationships with (as opposed to usage of) technologies, is to think of digital technologies as a paradigm through which everyday life is reconfigured, or as contexts within which we evolve new relationships of power and negotiation. Or to put it plainly, it has forced us to think of digital technologies not in terms of tools and gadgets, infrastructure and logistics (though those are also important) but as embodied experiences that reshape the very ways in which we conceptualize our everyday life.

When we talk of digital natives in India, the immediate spaces that they inhabit conjure up images of big crowded IT cities that are transforming into hubs of international outsourcing industries and IT development. We presume that digital natives would be found in the 12% of the Indian sub-continent where broadband access is available. We often narrow our focus to look at urban, middle class, affluent, English speaking, educated youth who occupy extremely privileged positions in their social, cultural and economic practice.

However, the story* I want to share with you today comes from an unusual location in India – from the village of Banni in the desert region of Kutch, located at the North-Western borders of India and Pakistan. In this small village that is about 80 kilometers from the biggest town with amenities like hospitals and schools, almost every household has a smart phone with access to the internet. In the absence of more popular forms like radio, which are disallowed because of the proximity to the turbulent India-Pakistan borders, the Chinese-made smart phones become the de facto interface of communication and cultural production. The phones become not only the life-line in times of crises, but also everyday objects through which the villages stay connected with the world of cultural production and entertainment. The internet services on the phones allow them to access Bollywood songs and movies, images and games, popular television programming and other popular cultural products in the country. In many ways, Banni is probably more digitally connected than many parts of the larger cities in the country.

However, the strong influence of Islam in this fairly homogenized community means differential access for the people who live in it. Women, according to the village doctrines, are not allowed access to technologies for fear of corruption. Hence the smart phones are all exclusively owned by men who have complete access to the information highway whereas the women do not have immediate ownership of such interfaces. And yet, the women in the village are quite updated about the latest news, gossip, politics, information about the weather, and cultural productions like TV soaps and Bollywood movies. This discrepancy between lack of access to digital technologies on the one hand, and a fairly comprehensive access to information of their choice is perplexing at first. Till you turn your attention to the children, who, in their pre-pubertal space, are not segregated so clearly into the technology publics and privates, and hence can navigate the spaces which are otherwise so gender exclusive.

These children would not usually be recognized as digital natives because they are not particularly tech savvy and they do not have direct and unlimited access to the digital devices or connectivity. However, they become interfaces through which the information consumed by the male population permeates and travels to the female population in the village. The children become embodied interfaces, who imbibe the information from these digital devices and re-enact it for the women in their own private spaces. The village now has its own child-stars who not only pass on the local news and information, but also re-enact, on a daily basis, scenes, songs, and story-lines from the soaps and movies that are popular with the women in the village.

While the gendered politics of technology access and the creative ways in which children are able to work as embodied interfaces is interesting – and perhaps needs more space than is afforded here – what remains interesting to me is how this story disrupts the regular narratives of techno-euphoria. It cannot be explained away merely in terms of usage. It cannot be used to claim radical social change in community and gendered relationships. It is difficult to make a technology-empowerment argument though this. What is perhaps most interesting is that it shows how we need to start thinking about digital technologies as producing new ecosystems that reconfigure our understanding of who we are and the roles we play in developing social relationality. The digital natives in these stories are not merely the children – though their embodied interface produces startling insights into how personal relationships with technologies are produced. The men who have access to the phones and have mastered digital literacy in navigating through these phones, the women who become the last-mile consumers who have found creative ways of staying connected despite their lack of access, and the children who become the nodes in this technology-information infrastructure, are all digital natives of a certain kind. They might not have claimed that identity and indeed might never want to. And yet, the very conditions of everyday life, as they are mediated by the presence of digital technologies in Banni, help us understand the social structures and information relationships in ways which are more complex than theorized by our techno-euphoric attention to network visualizations which are heavily determined by usage and action.

This story from Banni is layered and needs unpacking at many different levels. However, it shall always remain, for me, a catalyst to re-think the focus and framework of our technology discourse, and talk about digitally mediated identities (digital natives or otherwise) in a vocabulary that moves beyond usage, infrastructure and access. It emphasizes, for me, the idea that the gadgets and tools we use are, actually, only material manifestations of the digital — which operates at the level of a paradigm or a context, through which we are slowly reshaping the material, social, and cultural notions of who we are and how we connect to the world around us.

* I am greatly thankful to my friend Rita Kothari at the Indian Institute of Technologies, Gandhinagar, for first introducing me to this context and its peculiar technology ecosystem.