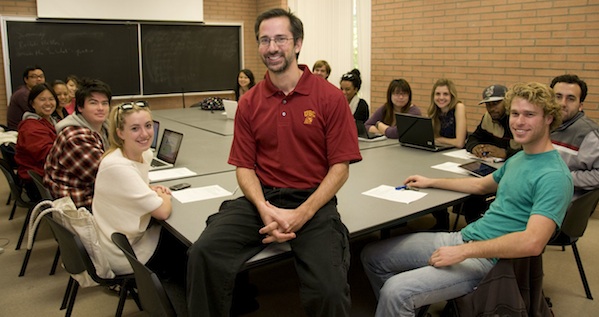 At November’s University of California Institute for Research in the Arts conference, the emphasis was on college courses that couldn’t be planned out according to set syllabi and fixed course objectives, because students were expected to be co-creators of the classes in which they often found themselves enrolled. Whether capitalizing on emergent interactions with online or offline communities, such courses defy predictability, because the students on the class roster aren’t the only participants in a new generation of service learning courses that take advantage of social media technologies. For example, at the Otis College of Art and Design, a course like neighborgapbridge might begin with a shopping list on the first day of class, progress to a trip to the grocery store around the corner, and end with a cookout at the local park. Of course, the basic questions that neighborgapbridge explores are ones rarely posed in a traditional lecture hall: “Can artists + designers collaborate + assume the role of ethnographers to investigate their neighbors? Can they identify ‘gaps’ in communication and propose ‘bridges’ to connect them?” Half-way through the semester, professors allow for the big “student takeover” to take place, and then they sit back to observe what happens. The Student-Based Creative Exchange at UC Santa Barbara turns the curriculum entirely over to students, who might choose sewing, welding, and button making over conventional reading, writing, and research activities. One of the most enthusiastic proponents of this new form of anarchic digital-oriented project-based service learning is Mark Marino of the University of Southern California. Last year Marino’s students signed up for a summer semester of a required writing course but ended up creating SOS Classroom.

As Marino explains it, the project emerged out of a rapidly unfolding news event:

At the end of the school year, LAUSD, the second largest school district in the U.S., canceled summer school for K-8 students. Reports estimate 225,000 students affected, but surely this is an understatement because every child is affected when children in their class have not received the instruction they need. This summer, my students at the University of Southern California have been tackling this problem using social bookmarking tools, namely Diigo and Delicious. The project aims to crowdsource education.

Thanks to the enthusiasm of Marino’s USC students, SOS Classroom soon had a large database of educational resources to be tagged, shared by both undergraduates and interested visitors to the site, attempting to prevent LAUSD students from falling further during the school break. The work of tagging resources with grade level and content might have been imperfect, Marino admitted, but he noted that “any user could filter results based on their personal needs, popularity of the site, or some other system.” Since the initial version, later classes have added a star rating system, a music resource, an online science fair, and resources for students applying to college.

Although cyberbullying has certainly provoked an overblown moral panic about defenseless youth online, as the DML Central’s danah boyd recently observed in “Bullying Has Little Resonance with Teenagers,” Marino’s students still chose to address “Tyler Clementi’s suicide and other recent suicides” with their most recent class project, @Wall Watch. After casting around for ideas with “Coach” Marino (as he is known) on the sidelines, the group decided to gather resources for young people experiencing emotional trauma, particularly LGBT youth who are victims of harassment.

“We started out with an idea for a college-student environmental cap-and-trade game,” explained Marino, “but in late September, the students felt such shock at Tyler’s suicide, such a wake up call, that they decided to turn in that direction, not all at once, but gradually. They weren’t entirely sure online tools could help.” Neither could Marino be certain the project would teach them about writing and rhetoric.

Over the next months, the class launched its own Facebook page and an instructional YouTube video about using @Wall Watch links to support friends in need of online support. The group also posted a letter to Facebook suggesting a relatively simple technical fix: “Facebook has already allowed people to flag pictures, so the next practically step is to allow users to flag comments, wall posts or statues.”

When Given the Choice, Students Embrace Challenge After Challenge

Some might question what any of that teaches about writing. One the one hand, Marino is hedging his bets: the project does not replace the four required essays. On the other hand, the class has been forced to address real-world issues of digital rhetoric while wrestling with an issue to which they feel a personal commitment. Choosing the design of the blog, the tone of the letter to Facebook, the posts to the Facebook, wordpress, and Twitter outlets, as well as the video have confronted the students with communication challenges that pre-set lessons could not have anticipated.

“But these challenges,” Marino says, “are challenges the students have chosen for themselves. In a way, they are writing their own prompts. And because this is a real resource ‘live’ and in the world, nothing is just an exercise.”

Courses like these pose obvious problems to college administrators who want a course to have easily defined learning objectives and predictable outcomes, so that the class described in the course catalog can be offered consistently from year to year and provide the same preparation for academic learning and future careers.

However, all educators need to do is look across the university to find models for more emergent course structures. Consider the large-scale group projects of senior engineering courses. Consider game design courses that rely on “game jams.” One of the strongest advocates for reforming course content is a professor of graphic design.

Meredith Davis has argued for “flexible curricula” (pdf) and has outlined the pitfalls that surround this approach:

If we build curricula around formats, we are likely to find ourselves unable to respond quickly to changing conditions, when new formats replace old or when the scope of the problem expands. And if we tie the teaching of form to decontextualized exercises, we risk being only about abstract principles that are later challenged by shifting media contexts and by the growing need for things that are social as well as visual.

For Davis, these new models are not only acknowledging a new pedagogical necessity but also a technological reality that the sciences have already recognized.

What is different here is the sense of emergent structures in courses that have traditionally relied at least on predictable routines of course packets and familiar prompts. But issues involving student engagement – or lack of student engagement at many institutions – are encouraging educators to experiment with making it up as they go along.