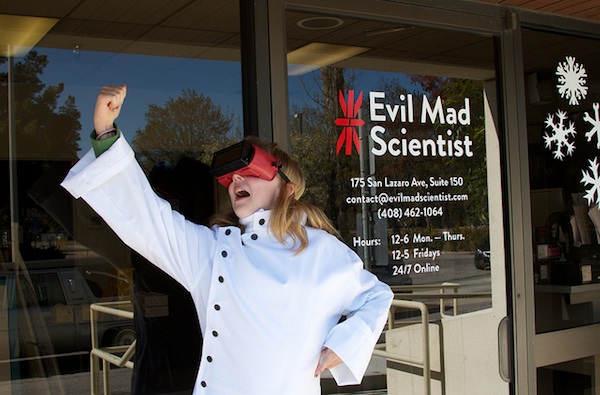 When I was ten years old, one television program was magical to me: Meet Mr. Wizard. Mr. Wizard was a friendly, knowledgeable old guy (he was probably in his 40s) who explained scientific phenomena to his young friends through various experiments and contraptions. At that time, the notion of science – of using knowledge to make things happen (blow up, emit smoke, become visible, change colors) – was as magical to me as Harry Potter’s magic wand was to a later generation. Chemistry sets for kids were still legal. I could buy potassium permanganate and glycerin at my local drugstore, mix them together with some aluminum shavings in the cone of my clay model of a volcano, and clear the classroom with a delayed eruption of sparks that I knew were coming – and dense clouds of smoke I had not anticipated. But that’s science!

I had not thought about Mr. Wizard for years – until a few months ago, when my search for help about using my new Arduino led me to Super Awesome Sylvia. Put Mr. Wizard in the 21st century, give him today’s video production capabilities and inexpensive, powerful devices to tinker with, and make him one very lively, excited, and personable 12-year-old girl, and you get Super Awesome Sylvia. It didn’t take long for me to stumble upon her. I went directly to the place I go to learn most new skills – YouTube.

Communities of interest lay down their own pathways in the knowledge-web, the way ants lay down trails of pheromones to mark the route to a food source. Maker communities focus on making things happen in the physical world, using online realms of search and virtual community to find and share knowledge about how to control a robot from your phone, stream video from 90,000 feet, build programmed flashing lights into your clothing, monitor your house’s temperature and electrical use, help volunteers measure radiation around Fukushima. It’s all about making and using things – and the best way to find out how to make things today is to find the right online hangouts. You have to know where to start, how to formulate the right search query and how to recognize the options that are most likely to lead to the knowledge you seek. But part of learning how to do anything in the maker world is about finding out where people online are discussing the problem you are trying to solve. Often, you will find young people demonstrating free of charge for anyone who wants to know, how to do an astonishing variety of things.

The problem I was seeking to solve was that I was new to Arduino and trying to learn both the electronic hardware and software coding skills needed to make it do something cool – like every other Arduino noob. So I started poking around on YouTube. If you look at the recommended videos when you watch a popular video about getting started with Arduino, you’ll find Sylvia quickly. Her “Super Simple Arduino” video has been viewed 131,000 times.

If you want to see the future of peer learning, you could do worse than starting with Super Awesome Sylvia. She’s proof that 12 year olds can teach engineering to other 12 year olds and sixty-five year olds. Then there is the partnership between Sylvia and her dad, who goes by “Techninja” – it reminded me of the kiddie software reviews my daughter had written for me 17 years ago. Then there’s the portentous phenomena of other very young girls and boys, inspired by Sylvia, who are also teaching and learning – and passing along their methods – on YouTube. So I arranged to talk with Super Awesome Sylvia and Techninja. Watch this video interview if you want to experience an inspiring look at (part of) the future of learning. You’ll be hearing from this young woman in big ways in years to come.