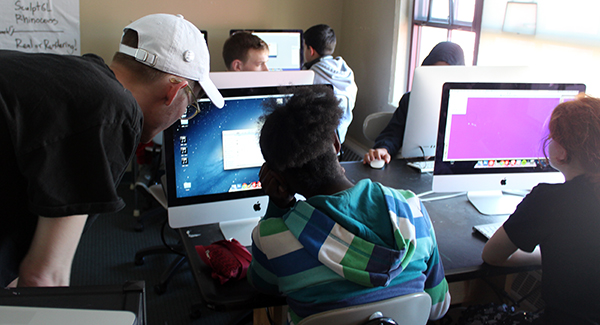 World making or world building as a pedagogical activity emphasizes authoring entire environments and systems collaboratively rather than merely having students compose one discrete text at a time in isolation. A few years ago, DML Central covered the large enrollment college course of Wayne Yang at UC San Diego, which included a curriculum of graphic novels, video trailers, and live performances dramatizing possible dystopian outcomes that might emerge from present structures of injustice. Other sites in higher education also are experimenting with the world-building paradigm. For example, the World Building Institute at USC encourages experts in cinematic special effects, smart cities, cutting-edge science, and transmedia storytelling to collaborate on imagining the future.

Teaching such ambitious concepts to K-12 students can be more challenging, but Providence arts educator Tycho Horan recently taught a one-week digital arts intensive for ¡CityArts! that capitalized on a world-building theme. In an interview with DML Central, Horan explained the origins of his pedagogy:

“I was very much piggy backing on the work of an AfroFuturist collective out of Philly called Metropolarity. They’ve produced a great journal, Speculative Vision & Critical Liberation Technologies. We read from their pamphlet on emancipatory world building as an opening text.”

Horan expressed some reticence about whole-heartedly embracing STEM to STEAM curricula that emphasize how arts education can be part of initiatives to improve fundamental competencies in science, technology, engineering and math. “I have felt very inclined to resist STEAM, which very much makes art making and various forms of critical making beholden to the sciences, although the arts have such a profound capacity for this task of world building. Jumping off from Metropolarity, it’s clear that world building can become an activist practice because you are building a narrative of a world, redefining that world, and engaging with collective work that is interested in interdisciplinarity and making work that lives in many media. As an art teacher, you are always coming up against the limitations of media, particularly in public schools where resources for materials and equipment are slim. You might be teaching painting or book arts, but that kind of more narrow practice seems less relevant to my students. Even in teaching digital art with my little gimmicks — Arduino, robotics — I realized that students were much more engaged in identity construction, using their Tumblr page or Photoshopping a brand they were making. However, too often students’ ambitions in this area are too small; they could be building things that are bigger.”

In addition to working with ¡CityArts!, Horan also is an artist mentor for New Urban Arts, where he works entirely with high schools students four hours a week. New Urban Arts has a strong civic participation component in which youth are prime stakeholders in an environment intended to foster empowerment, independence, and critical thinking, as a statement of their core values explains. “That was probably the most intimidating interview I’ve ever had in my life. There were two staff members, and everyone else around the table was a student. They have a student council called STAB, Student Team Advisory Board, who are all the students who vetted every single artist. Students pick the teachers, which is I guess how universities worked in Bologna.”

At ¡CityArts!, which teach all over the city, Horan’s world-building workshop was structured around an intensive full day curriculum designed for middle school students, although Horan also worked with the youngest students, who might only be 8 or 9 years old.  “World building played out very differently with different age groups.”

As a digital arts teacher, Horan often found himself doubting that many of the premises of so-called “post-Internet art” really are applied to his students’ experiences. “My students are not digital natives by any means. They can only use computers in schools, libraries, or after-school organizations. One of the biggest problems facing various programs that try to teach digital literacy or code literacy is that they make a lot of assumptions about the nature of progress. The Internet may seem to be a blasé fact of life that is not novel in any way, but access to the Internet is also very much dictated by the entry points that students have available to them, which are given to them by giant corporate conglomerates, like Google or YouTube.”

Horan observed that his biggest challenge as a teacher was “teaching the interface” of more powerful computing systems and programs, particularly when his students’ previous use of the Internet had been largely “mediated through the apps on their phones and mobile operating systems.” As he explained, “I realized I had to explain things that almost seemed self-evident. The Apple operating system is supposed to be intuitive, but it is not intuitive to my students. We really need to pay attention to how much technical knowledge needs to be taught or how the space needed to discover it on their own needs to be created.” He asserted that “saving things was a whole lesson” in its own right and then noted how that was actually a profound part of the teaching experience, aiding students in the process of documentation and getting them to not see their digital artifacts as disposable.

Horan described a lesson on remapping the earth that was particularly demonstrative. “I made a pitch to my students about how we already live in the future, how the earth was thoroughly mapped. But, they had barely interacted with Google maps at all.” Horan found that “teaching the interface of Google maps was really powerful. They could find their house, find their school, and find a relative’s house, but it was all very local.” Horan wanted to set about “very literally expanding their horizons by seeing whole earth. I showed them how I could drop my little man in the middle of Tokyo and navigate Tokyo.”

In musing about the current push to integrate 3D printing, Horan admitted that “the 3D printing part of my class was the least conclusive,” partly because of limited access to the Internet. He recalled the frustration of being “only able to complete one of my students model’s, which was only 2½ by 2½ by 2½ inches. It took three hours, not including when it error printed half.” He expressed admiration for the instructor of the “3D printing class in the regular form of ¡CityArts!,” who went early to the site to load up print queues with his students’ designs.

In addition to being time-consuming, Horan bemoaned the fact that 3D printing software was also “kind of opaque” and “doesn’t teach you as much about technology as you would think.” For example, the popular MakerBot product line of 3D printers “converts mesh into interlocking tubes or hexagonal structures, so the program is figuring out the geometry for you.” He also told how his initial plan was to teach Rhino, until another ¡CityArts! instructor, Micha Baclig, introduced him to SculptGL, which provided both needed functionality and more than “easy answers to complex questions about the relationship between digital and analog media.” Horan argued that there were many ways to think about 3D modeling pedagogy. “A kid can take a 3D model and turn it into a sticker or make a drawing. In the translation between media, there is more that could happen.”

Apparently the common refrain that Horan often heard from students was “I’m done. What do I do now?” In getting them to start “rephrasing” their scripts for interacting with art teachers, he emphasized “really trying to encourage multiple quick experiments. I like to give students a menu of things they could do. He described how this iterative approach helped students go from “what might seem to be bedazzled garbage” to “a world that had a whole crazy symbolist futurist logic.”

Horan has also developed an innovative “emoji pedagogy,” which he landed on “totally by accident.” (Emojis are ideograms or smileys that became popular in Japan for display on mobile devices and now decorate text messages and web pages all over the world. Like keyboard symbol emoticons they convey information about the emotional flavor of a message.) “I was teaching the most grueling lesson of the week, Photoshop fundamentals, covering tool bars and layers. And I saw one boy drawing with the airbrush tool.” Apparently, he was laboring to produce the classic one hundred points emoji. Horan pointed the boy to the website Emoji.ink. “Middle school boys can be pretty skeptical. ‘Oh yeah, whatever mister.’ But, soon they were playing with it in a lot of interesting ways. And, I could show them work by artists like Vince McKelvie and Yung Jake, and they could see the connections. I am always attentive to what my students are interested in. Otherwise, there is no reason for either of us to be there. If my students are interested in emoji, I’ll teach emoji. One of my students figured out that if you drew with them very slowly, undulating back and forth, you could create long spools of color. It’s a new visual language imbued with so much meaning, but it also can be a tool for abstraction. Photoshop is a powerful tool, particularly for students who don’t have access to it all the time. It’s the industry standard. But, from the student perspective, there are equally powerful web applications developed by artists. They spread from Facebook pages or appear on Buzzfeed. Teachers should keep their ears open for those applications.”

Horan characterized himself as a “fan of open source teaching,” although he said he hasn’t used “open source syllabi as much as I would like to.”  He noted that more often people resort to “pseudo sharing,” because “people talk about sharing more than they actually do,” and “most of my teaching resources don’t come from lesson plan sharing websites, which usually have some kind of membership.” He recounted how most of his lesson planning materials for the course came from a hybridized combination of content posted by other teaching artists, such as Owen Roberts, about web design and multimedia production and from sci-fi writing forums. On sci-fi aficionado sites, he discovered “a lot of great worksheet ideas and flow charts, tools you could use to build your world just like you would in a science fiction context.” He chuckled about the fact that “it was so far removed from the context in which I was teaching.” As an enthusiast for “more intimate sharing,” he plans to post all his resources at worldbuildingatcityarts.tumblr.com. “I want to be a node of open source teaching in a network of independent teaching artists, but I don’t have the ambition or dream to create some master system or database. I’m not Bill Gates.”

Author’s note: In this series on personal stories about digital arts education apart from traditional school settings, I wanted to include an account that is very literally close to home, because Horan also happens to be one of my adult sons.