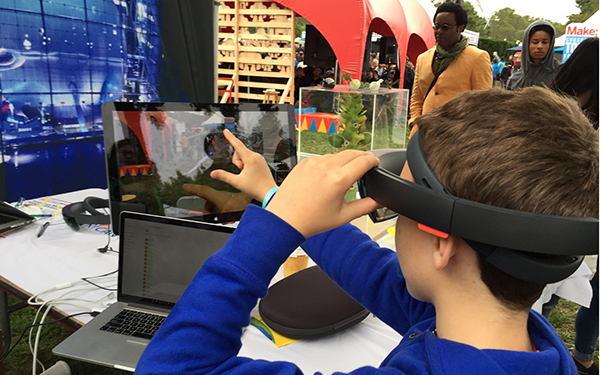 This past October, I had the pleasure of presenting in Irvine, California at the new home for the Digital Media and Learning Conference on digital learning at museums. With my colleagues Eve Gaus of The Field Museum and Rik Panganiban of the California Academy of Sciences, we tried to identify the leading trends we’ve seen emerging in recent years, given our different vantage points as advocates for digital learning in our respective museums.

Playfully titled “The DigitalLearningification of Informal Learning Centers: Lessons from Three Museums,” we tried to make the case that museums are unique and influential informal learning institutions that can be powerful spaces for young people to learn, connect and create digital media. Museums often have more freedom and resources than a school, library or after-school program to support a variety of digital learning offerings for youth, such as tinkering spaces, youth-led media creation, and exhibit creation. At the same time, museums are moving beyond siloed programs for young people, toward connected learning experiences that better integrate with school-time learning, other institutions that youth are involved in, and their time with their peers.

The major trends we explored:

We each began at our respective institutions four or so years ago. In that time, we’ve each seen digital learning grow and spread within our museums. At The Field, the digital learning team was first institutionalized in 2010, as a way to use technology to engage learners in the museum. A formalized commitment was established with the opening of the Grainger Digital Media Studio in 2012, a digital studio that would host both face-to-face and distance learning programs. At the California Academy of Sciences, the work began five years ago as an independent special project; that project merged into youth programs within the Teacher and Youth Education Department and is now integrated into a suite of youth programming across the education division. A similar process happened at AMNH. Our youth digital learning strategy increased the number of digital tools in use and doubled the use of digital tools of science. Perhaps more importantly, we also deepened the integration of substantive digital practices across often-siloed areas as the sites of digital innovations spread throughout the department.

In other words, at all three museums, pedagogy and practice has been innovated and spread, leaving strong foundations for the years ahead. We’re ready for the next steps.

We are all seeing youth increasingly treated as not just recipients of knowledge but as co-creatives with the museum to create public-facing informal science learning experiences. There are many examples, from youth councils to game design projects, with topics like whale ecology and global threats to biodiversity. The Field Museum, for example, worked with youth to design curioCITY, a teen-only career night that pairs a scientist with non-scientist to discuss career pathways. The Academy this year launched a youth advisory team called the Teen Think Tank, a group of committed young people who review and give feedback to museum initiatives from new exhibits to social media campaigns and classroom curricula.

Technology is increasingly bringing visitors into the museum without leaving their home, school or workplace, changing the face of science. At the California Academy of Sciences, their new Science Action Club, a middle school after-school program, has expanded to 350 sites throughout the country, made possible through virtual trainings frontline educators, using free app-based citizen science tools. At The Field Museum, classrooms across the country are connected to a scientist and educator, who talk about the scientist’s current research and connect that research to what students are learning in the classroom. Interactions like this illustrate that science is an active and ever changing field, that we don’t know all the answers, and works to break down stereotypes about who scientists are and where they work. And all three of us are offering programs and content on sites like Coursera. Khan Academy, iTunesU, and YouTube.

AR/VR has been dominating the news, not just within digital learning but in popular media as well with the rapid spread of Pokémon Go and the development of consumer-grade wearables, like Sony’s new VR goggles. AMNH has launched an innovations lab dedicated to exploring how such tools might offer interactive science data to visitors within our Halls. A CT scan of a Mako shark skeleton augments the one hanging in the Hall of Biodiversity, and can be made to swim and bite. A virtual orchard provides visitors with the opportunity to shrink down to the size of an insect to learn how they breathe without lungs. Meanwhile, at The Field, Google Expeditions are giving teachers VR experiences within their halls.

How do these trends strike you, from your own vantage point? What other digital learning trends do you see, either in museums or elsewhere? Please share in the comments below.