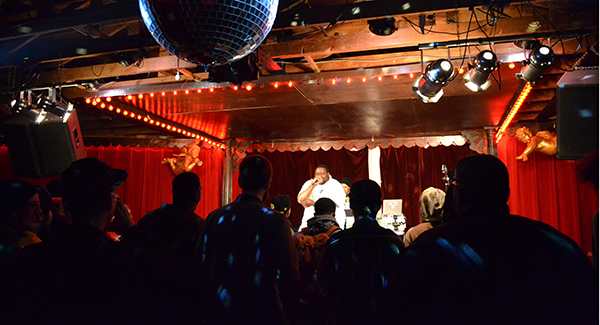 For much of its duration, the Digital Media and Learning (DML) initiative has made a serious investment in not only reimagining learning but also remaking the kinds of institutions and places that support learning. This effort has come in many forms including the design of new kinds of spaces for children and teens to learn and cultivate the skills that are relevant in a knowledge-driven economy. One of the enduring outcomes of the initiative, for example, has been the design of learning labs across a number of cities.

What are Learning Labs?

The report, Learning Labs in Libraries and Museums: Transformative Spaces for Teens, defines learning labs as, “innovative spaces that prepare youth to meet the challenges of a complex global economy and gain the skills they need to succeed in a rapidly changing world, while allowing them to follow their passions and to inspire one another.” The report adds that learning labs enable young people, “to build the skills and knowledge to pursue a personal interest or passion in an environment that provides support from friends and caring adults, and can link this learning and interest to academic or career success or to civic engagement.”

Learning labs are places where young people can connect with each other and with mentors to explore areas of personal interest and relevance. Many of the learning labs that have been created or inspired by DML have been designed to provide new settings for youth to build the competencies and gain knowledge that are oriented toward future opportunities in the formal economy or civic life. One of the key elements of learning labs is the intentional focus on fostering creativity, community, and opportunity. Learning labs have been established in libraries, museums, science centers, and community organizations.

In the fieldwork that we have been conducting for our new research project, Doing Innovation, we have been struck by the informal formation of learning labs by millennials. That is, the creation of spaces and practices that reflects many of the qualities that have been built into the design of DML-inspired learning labs.  Throughout our research, we have maintained an interest in understanding where young people go to cultivate the skills and gain the knowledge that they need to sustain their pursuit of a creative endeavor. We have learned that many turn to informal spaces, communities, and collectives that, among other things, create spaces to collaborate and share ideas that lead to opportunities to learn new and relevant skills.

A Laboratory for Learning and Doing Hip Hop

One of the more interesting communities that we have explored in our research is the Austin Mic Exchange, or AMX. A primary goal of AMX is to create opportunities and the tools for young hip hop artists to grow. AMX’s feature event is a weekly open mic night. As we began to observe the AMX community, we discovered that the open mic event embodies many of the qualities that characterize learning labs. A crucial element in any innovation ecosystem is the ability to create an opportunity and space for participants to grow their knowledge. And, this is precisely what AMX’s open mic night does for those who participate.

The AMX open mic night is an intriguing example of what makes learning labs a vibrant resource for young people. This space has not been funded by the non-profit sector.  Moreover, it has not had the benefit of experienced designers or researchers helping to build a space for young people to pursue personal or career interests in a setting that emphasizes interest-driven and production-centered learning. Rather, the learning lab attributes of AMX have been organized organically and informally by the young people who make up the community.

On the surface, open mic night at AMX is an opportunity for artists to come and perform on stage or share their music in front of a live audience. Beneath the surface, however, open mic night is a dynamic performance space and learning laboratory. This may seem strange at first insofar as we usually associate learning labs with traditional learning settings such as libraries, museums and other public spaces devoted to supporting and connecting youth learning to opportunity. But, open mic night at AMX does what all good learning labs do: it provides a space for aspiring creators and learners to tinker, play, experiment and connect with others. Environments like these fuel the cycle of innovation through the testing and sharing of ideas in spaces that ignite exploration.

The open mic venue is a dynamic space. Visit open mic night and it is clear that the performers on stage are often testing new ideas and techniques in the form of rhymes and their on-stage persona.  Music producers and beat makers use the space to test what kinds of beats move the crowd — a key element in any hip hop underground scene. In many ways, the performance stage functions as a place to experiment with new techniques as MCs seek to master the dynamics of engaging the audience. Places for experimentation are also places for the inevitable — failing. There is broad consensus that failure is an inevitable feature of any innovation ecosystem. Not surprisingly, failure is a familiar aspect of open mic night at AMX. But, what makes learning labs like AMX viable resources for learning is the fact that they are safe places to fail.

During our observations, no performer has ever been treated rudely or with disrespect. And, when MCs struggle, as most do, the crowd is usually supportive. Like good learning labs, creativity at AMX’s open mic night is powered by caring mentoring. In most cases, the mentoring is peer-to-peer, genuine and marked by elements of reciprocity. A more experienced performer or music producer may reach out to help someone who may be experiencing difficulty finding their voice, sound or stage presence. In other cases, an experienced AMX participant may lend a supportive hand because someone did the same for him or her. Open mic performers understand that appearing on stage can be overwhelming but, it is also necessary to grow as an artist.

The other component in AMX’s open mic night, the audience, is equally instructive. Some audience members attend open mic night to see aspiring artists or simply to hang out with friends. But, many come to observe and learn what it takes to be a live performer. The founders of AMX are well attuned to the ways in which the open mic setting functions as a pivotal space to learn. One of the founders, p-teK, has an interesting perspective on the state of underground hip hop and the aspirations of newcomers. p-teK acknowledges that the widespread diffusion of digital music production hardware and software tools and social media make it easier than ever to produce music from your home and share it online. However, he maintains that if you want to establish your reputation as a performer you have to do live shows. His advice to young artists is interesting: “You need to have a good live show and by watching others’ live shows, learning from what they do well and what they do poorly, that’s how you build your own [show] and by playing.”

Even with the advances in technology that allow artists to make and distribute high quality music from the privacy of their own bedroom, p-teK’s perspective underscores the importance of learning how to perform in live venues. Moreover, his observations debunk a common myth about millennials that contends that they are so tethered to technology that they are disinterested in their peers and their community. Open mic night at AMX consistently refutes that claim as a diversity of young MCs, beat makers, and artists regularly participate and willfully contribute the resources — social, technical, musical, informational — that sustain the community and support creativity.