Earlier this month, I participated in the Digital Natives Workshop hosted by KAIST, the MIT of Korea, and attended by researchers from the U.S. and across the Pacific Rim. My talk on adolescence and the science of attention (entitled “The Kids Are All Right”) has been recorded along with the other presentations and posted on Google Wave by Dave Sonntag, one of the organizers. I also live-blogged at www.hastac.org. After the workshop, we took the three-hour bus trip from Daejeon to Seoul where we had a field day at the Samsung D’Light interactive showcase and then, on Saturday, were part of a Bar Camp at the high-tech Daum University, in a room that came with a slogan:  “Beyond Learning.” I’m still pondering that.

For the two days after the Bar Camp, I had the pleasure of seeing Seoul “curated” through the sensibilities of two distinguished multimedia artists, Youngsun Jin and Jayoung Ku. Among Youngsun Jin’s exquisite fresco murals are “Enlightenment,” a collaboration with the late video artist and media philosopher, Nam June Paik. Youngsun Jin is also a distinguished art historian who writes about the use of fresco by contemporary artists. My second guide in Seoul, Jayoung Ku, creates haunting multimedia performance pieces, described by one media theorist as “searching the information-cosmos for Zen.” I could not have had a better immersion into this multi-faceted city.

Of particular interest to DML Central is the Child Education and Culture Center at the Leeum Museum of Art that we visited together. It, too, is owned by Samsung and like many twenty-first century private art museums, is a modern-day cathedral to art, architecture, and technology. Three major European architects were brought in to design site-specific buildings for the collection. Mario Botta of Switzerland designed a fantastic space winding around a gigantic circular stairwell inspired by the beautiful Korean porcelains housed there. That portion of the museum extends back to twelfth-century terra cotta pieces, and also includes Korean National Treasure Buddhist paintings, bronze sculptures, and jewelry found in ancient tombs. The second museum is an ecologically-inspired fantasy by French architect Jean Nouvel that includes the work of both Korean and international contemporary artists, including a video sequence from the famous “Egg” series by Nam June Paik.

The much-decorated Dutch architect Rem Koolhaas designed the Children’s Center. It is dedicated to making art and, architecturally and geographically, is as significant as the other buildings. This isn’t some small kids’ nook in the museum’s basement but is its own full, architecturally brilliant space. Instead of “Do Not Touch” signs, this space invites children of all ages to touch, to join in, making, creating, envisioning. It is about tinkering and “thinkering.” It is utterly fun and completely visionary, and uses both ancient and contemporary multimedia pieces as sources of inspiration for the tinkering.

I don’t know of any other museum that does such a good job of conjoining ancient and modern, history and making, as one seamless, interactive, interconnected world of creative, playful learning. 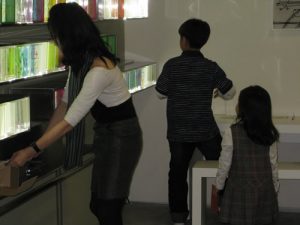 The space refuses any distinction between art and technology, creativity and science, making beauty and building things, physical activity and mental activity. “Jungle gym”-type exploratory equipment to climb on leads to editing suites. Lovely illuminated walls holding rows of film gels invite you to remix images by rearranging, tracing, and painting them over on a plexi-glass light table and then reinserting them into the “user-generated” installation wall.

I’m not even sure what “digital” means in a space where low-tech and high-tech merge, and everything is designed to inspire.

I particularly appreciate the well-designed conduits between the “art museum” spaces and the “art making” spaces. My favorite is a camera on a tripod in front of a huge backdrop of a Bruegel-like harvest landscape.  Anyone can pose there, perform scenes, and “inhabit” the landscape photographically. This landscape has a twist, though.  In the contemporary wing of the museum, you see that it’s actually part of a work of art by documentary videographer Yeondoo Jung. In his work, he contests the idea of “made” and “natural” beauty. Everything in the video is “artificial” and the video, shot in sumptuous Golden Age Hollywood Technicolor, documents workers making the landscape, literally rolling out sod for the soil and so forth. 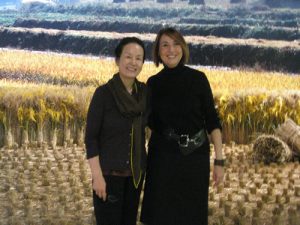 As my new friend Youngsun Jin said, this videographer “transforms our invisible dreams into the visible.”

And that is what we all—kids and adults too—are compelled to do in the children’s building of the Leeum Museum in Seoul. It was fascinating to move from a Digital Natives Workshop at KAIST to a literal workshop designed with “digital natives” in mind. The Leeum puts the goal of inspiring a new generation to creativity on a par with showcasing the greatest works of ancient and contemporary traditions of art. It insists that a museum’s walls not be confining but liberating, and that the great art we prize and cherish should inspire—and set a child’s imagination free.