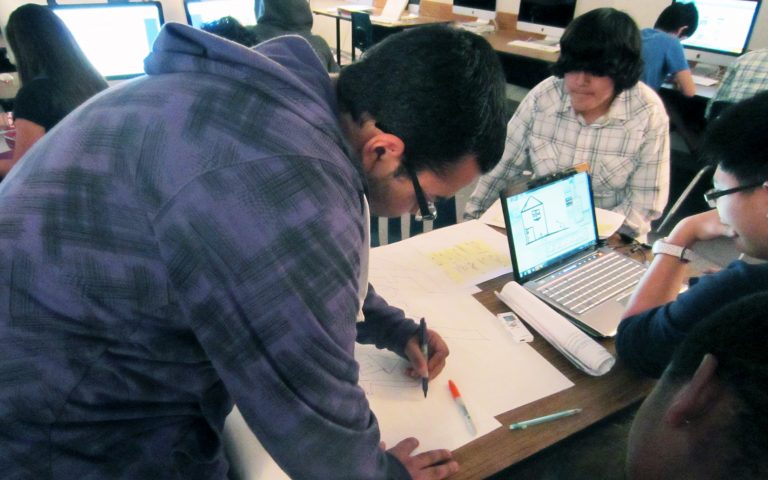 For nearly four decades, economists have been discussing what is generally referred to as skill-biased technical change. That is, the degree to which technological transformations — computerization and automation — privileges high-skill workers over low-skill workers. Schools are under increasing pressure to design classrooms, curricula, and learning experiences that help students develop the kinds of design, engineering, and creative skills that are a better fit for innovation economies. One model of schooling that is gaining increasing attention for developing and spreading these skills is the Pathways in Technology Early College High School, or P-TECH for short.

P-TECH is one of the latest efforts to make schooling and learning more connected to the real world. The program is designed specifically to provide STEM education, based on a partnership with a school district, a community college, and a business. IBM was the inaugural partner of the Brooklyn P-TECH pilot in 2011. Since then, other corporate partners in other cities include Cisco, Motorola, and Verizon. What makes P-TECH especially unique is the fact that students spend an extra two years in high school. The K-14 paradigm means that students also have the opportunity to earn an associate in applied science degree along with a high school diploma.  Students also are paired with corporate mentors (physical or virtual pairings).

In a cover story, Time Magazine claims that the P-TECH model, “is very likely a ticket to the middle class.” The New York Times has pointed to P-TECH as “the future of the country’s vocational education.” President Barack Obama has lauded the model and used the Brooklyn school to underscore the importance of funding innovation in U.S. education. Referring to P-TECH in his 2013 State of the Union address, Obama proclaimed: “We need to give every American student opportunities like this.”

Since the initial pilot in Brooklyn and Chicago, cities in Maine, Massachusetts, Missouri, North Carolina, and Tennessee have committed to creating their own version of the P-tech model. All of this attention and the desire to scale provoke an important question. Is the P-Tech model the future of career and technical education?

P-TECH schools are the latest iteration in a long line of ideas designed to assist young people in what researchers refer to as the school-to-work transition, a phenomenon that is largely the result of compulsory education in the 20th century. Concerns about the transition from school to work have intensified as the employment rate for black and Latino youth remains low. These concerns are also driven by the skill-biased technical shifts in our economy. P-TECH incorporates elements of previous school reforms — career academies, technical preparation, early college high school — that have been designed to assist in the school-to-work transition for students who face long odds in the race for education and economic opportunity.

Historically, these programs aim to boost the educational and employment prospects of students who do not have a history of postsecondary educational attainment or access to high-skill, high-income employment opportunities. Researchers in the school-to-work transition area have referred to these students as the “forgotten half.”

The fact that P-TECH students can receive an associate’s degree without paying for community or a two-year college is a major bonus. Moreover, access to entry-level employment in the technology sector has also garnered praise. It is features like these that has led Time Magazine, the President of the United States and other proponents to champion P-TECH as “a ticket to the middle class.” These claims, as I note below, are not completely accurate.

This notion of schooling addresses three immediate challenges: The perceived skills gap that many low-income students face as they enter the jobs market; the lack of postsecondary experience and credentialing among low-income youth; and, finally, the social isolation that severely limits the reach and diversity of social networks in poor communities.

The P-TECH mantra that “six should be the new four,” is certainly credible when you consider the poor postsecondary outcomes among low-income black and Latino youth. The two years immediately following the 12th grade are especially critical for youth who do not have access to some form of postsecondary education. Among all U.S. workers, those with a high school degree or less suffer the highest rates of unemployment and economic instability. The chance to earn an associate’s degree could have significant payoff in terms of income earning potential. A recent employment forecast by the Bureau of Labor Statistics notes that between 2012 and 2022, only occupations that require a master’s degree will grow faster than jobs requiring an associate’s degree. This is also consistent with a Brookings Institute report that finds that a wide number of sub-bachelor’s STEM jobs are available in many large metropolitan areas.

Finally, any iteration of schooling that can begin to grow and diversify the social capital and social networks of students and schools that suffer from the effects of social isolation is an absolutely positive development. In our research, it was clear that the school, students, and community were disconnected — geographically and socially— from the networks and resources that link to meaningful opportunity.

The Future of Career and Technical Education

The challenges confronting P-TECH are the challenges all educators face in the design of career and technical education that effectively addresses the skill-biased technical changes that are remaking the future of work and opportunity. Here are three initial tensions to consider:

1. The Troubled History of Vocational Education

In many respects, P-TECH is vocational education. The history of vocational education in the U.S. is tangled with issues of race, class, and structural inequality. Consequently, even the P-TECH model, hype notwithstanding, deserves a probing eye. Historically, vocational education has been viewed as a mechanism for tracking low-income youth into career paths that are low- to middle skill and rarely afford opportunities for career and economic mobility. In her book “Keeping Track,” Jeannie Oakes offers a rich and compelling analysis of the different learning opportunities and learning outcomes experienced by high-track and low-track students. Studies like these fuel considerable doubt that vocational education actually prepares students for the 21st century workplace. Whereas high-track students are exposed to an academically rich curriculum, low-track students are generally offered more vocational training. Schools that blend the ability to think critically and creatively (i.e., academic tracks) with the ability to gain a tradable skill (i.e., vocational tracks), may be more effective in nourishing the diverse repertoire of skills students will need in a rapidly evolving economy. Despite the emphasis on career and technical education, it remains to be seen if P-TECH schools can blend academic and vocational curricula.

While the press and even the President claim that P-TECH students will get entry-level jobs at IBM, the company makes a softer claim: that students will be first in line for available jobs. The types of jobs mentioned include entry-level technology jobs like software specialists who answer questions from IBMs business customer or “desk side support” workers who answer calls from PC users. In short, the jobs appear to be in the areas of technical support.

Earning an associate’s degree is a real bonus. However, the associate degree and the training that students receive are limited to entry-level, modest income jobs. These are the very jobs that are vulnerable to two trends that are tossing the future of work into utter chaos: outsourcing and automation. It is unlikely that the jobs that P-TECH students are eligible for provide long-term and sustainable employment. Consequently, they must be prepared to transition into jobs that will require the attainment of more education and new skills. There is shared consensus among many economists that the jobs of today are falling prey to what MIT economists Erik Brynjolfsson and Andrew McAfee refer to as the second machine age. As the P-TECH model evolves, it must look beyond the jobs and career opportunities of today and equip their students with the skills and dispositions that position them for the jobs and opportunities of tomorrow.

3. Preparing for the World of Tomorrow

The primary challenge that P-Tech students will face is the certain fact that their associate’s degree is, at best, an entry-level credential. Proponents of P-TECH must avoid the euphoric view that by making it through P-TECH, students have made it through life. In truth, graduation from P-TECH is the beginning of their professional and career journey, not the end. The jobs students qualify for will fall victim to automation.

The ultimate goal, then, should not be to secure an entry-level position with IBM or Motorola, but to leverage the opportunity to gain access to resources and assets that expands opportunities in either their employment choices or postsecondary education. As one proponent of the program claims, it is best to view P-TECH as a chance to earn vocational certificates that are “stackable,” that is, used as steps to earning higher levels of education and professional experience. In the end, the P-TECH model will not be judged by how well students do upon graduation, but rather in the days and years ahead.

P-TECH students and advocates of the model should keep this assertion from Wired Magazine’s Jim Kelly in mind: “You’ll be paid in the future based on how well you work with robots.”