Editor’s note: This is the first in a three-part series highlighting different programs that teach digital literacy outside of school.

Under the auspices of the Mayor’s Office of New York City, Global Partners Junior is an “online international exchange program that connects New York City youth ages 9-12 with their peers around the world.” It also is devoted to teaching digital fluency skills for the transnational communication made possible by the Internet. Students “research facts about their communities and international cities, exchange messages on a password-protected website, and share multimedia projects and video greetings.”

One of the junior co-teachers featured in the video is Brown University doctoral student Lindsay Zackeroff, who was an instructor in the latest iteration of the program Urban Stages, which focuses on theater production and design. Zackeroff sat down for an interview with DML Central to talk about her experience working with young people at different community centers in New York City. She explained that many metropolitan parks and recreation services were “starting to develop computer labs that offer a variety of often cutting-edge digital resources” so that “technological literacy for everyone in the community” can be served with everything from MacBooks to digital SLR cameras and curricula that include creating comics and animations. She described digital literacy courses as “some of the most coveted classes, especially for teens and provided a “great place to hang out.” (Mimi Ito’s work on teens hanging out in Hanging Out, Messing Out, and Geeking Out describes more of this behavior.)

When asked how facilities and computer literacy paradigms among community centers differed, Zackeroff explained: “I worked mainly at two different centers, and I also substituted at a third center at Harlem.” She was the head teacher at the Herbert Von King Cultural Arts Center at Bed-Stuy in Brooklyn. 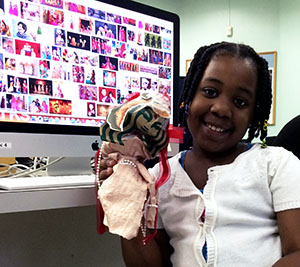 “The Von King Cultural Arts Center supported the most incredible theater and performance programs I had ever seen,” she said. “Von King also had a huge stage that the kids easily filled. The students already had amazing dance abilities, could sing and write songs, and could act for the stage. And, they were only 6-12 years old! Because theater and performance were the kids’ strengths, I matched the curriculum to think about the summer’s theme, ‘Urban Stages.’ We did a lot of video correspondences, because they knew how to film on iPads, iPods, phones, and hand-held devices, and it gave them a chance to exercise their creative freedom. The portion that required the computer was a bit trickier. The computer lab was a small cement room that got very hot during the summer. The Macs did not work, and only PCs were available. Only a few of my students were really proficient in typing; most needed to work with partners to do their blog entries. For a lot of kids, it was just that they are so young, and they learn typing on touch screens, not computer keyboards. But for others, it wasn’t just that they were still working out spelling; it was the fact that they couldn’t type yet. It was tremendous how the kids learned to type just from blogging with the Global Partners Jr. curriculum.”

In contrast, she described Hamilton Fish Recreation Center in the Lower East Side as “a remarkably well-equipped lab. They had pretty much everything you would need for creating student films, starting with 20-25 Mac desktops from within the last two to three years and ton of software for their creative output that was very sophisticated and had cameras and tripods as well as programs such as Adobe Creative Suite and Final Cut. A lot of the instruction was about familiarization with software.” 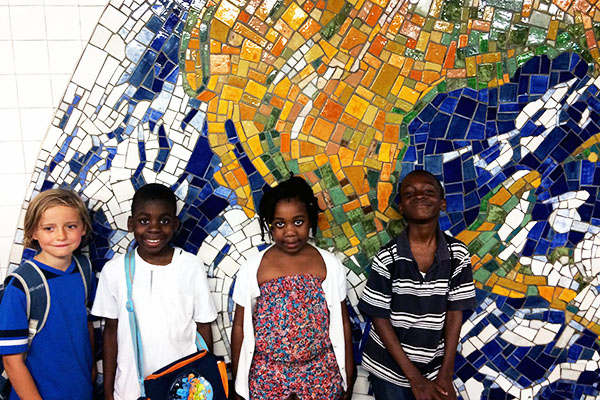 She characterized the Jackie Robinson Recreation Center in Harlem as “right in the middle. They had all working computers, but I don’t know about their cameras.” She described it as the computer lab with the “most community” because “people who weren’t enrolled in the classes just came in to use the computers. A lot of them were people making music.”

When asked about teaching netiquette, she said it could be difficult because there was a “varying set of skills at the different sites. At Von King they would often respond to blogs as if they already had a conversation going without introducing themselves or providing context, like saying what country they were from.” 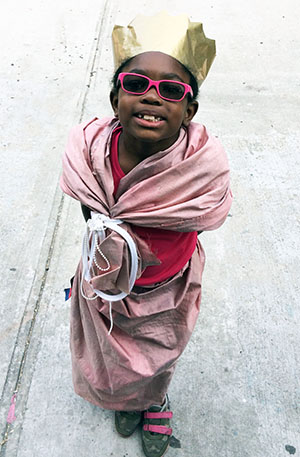 Time to spend on netiquette also depended on class size. “Hamilton Fish had a much smaller class with five rather than 20 students. I had time to teach them to introduce themselves over the blog, to include pictures and to describe their pictures, and to ask questions that would prompt a further discussion,” she said.

“There weren’t a ton of language barriers because it was an English-language program. There were times they received responses to blog posts from students who had obviously had English as a second language.”

Yet, she described an egalitarian spirit around linguistic diversity. “We often discussed what other languages the kids spoke. Almost all of the kids I had spoke another language: Spanish, French and Creole. They had familiarity with many different languages in their community around them.”

Zackeroff argued that such “virtual pen pal” programs could be made more effective if the emphasis included “sharing different media other than writing.” Giving younger children too much to read could be difficult in the summer and could make it challenging to “keep the energy up.” She suggested that writing activities could be tied to multimodal composition, such as “writing a script for a video.”

As someone interested in questions of embodiment, Zackeroff said that “the global theater emphasis was trying to push research skills and cultivating those research skills. Students used a lot of YouTube and Google search to discover information about theater traditions, mostly contemporary. At Von King, all the students were really into dance. Blogging and writing on the computer became secondary to the dancing. “They also liked to record and share material and see their family’s reactions more than sharing with a faceless virtual pen pal. As the partner cities started to share more and more photos and videos, they saw their pen pals come to life as well and really enjoyed watching their correspondence flourish. It was a way of archiving their summer and recording it for them. Hamilton Fish loved the blogging, correspondences, and cultivating new friendships. Theater was a bit more secondary; they were often looking to the theater to bring a new dimension to their blogs. Each Global Partners Jr. site, I would say, found embodiment in different places. I think their understanding of embodiment and technology was tied to both their technological resources and passion for performance.”

DML Central has profiled a number of experimental practitioners working with digital performance, including Micha Cárdenas, Emily Roxworthy, and Wayne Yang. When asked about her role models for rethinking digital performance and literacy, Zackeroff  praised the work of Shana Moulton and Meredith Monk.

As someone who identifies as a feminist, Zackeroff explained that “my personal attachment to feminism is through the body, through dance, and through choreography. I see blogging and virtual pen pals as a kind of dance in which different people negotiate ambiguous spaces. Sharing performances online shows how students can make work and exhibit this work without being pressured by the things they see on YouTube.”