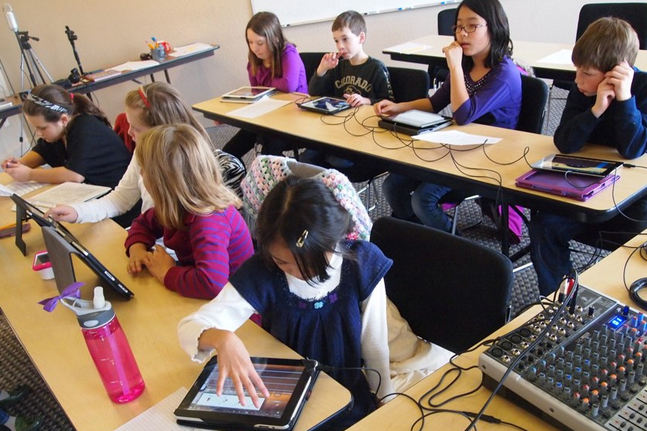 For more than a decade now, I’ve internally cringed whenever someone talks about the promise of technology in education. Often, discussions of iPads, video games, laptops for all focus on the potential of access to the software, device, or app rather than how it’s used.

In 1999, my department at UC Santa Barbara decided that all lecturers would hold classes in campus computer labs to demonstrate our progressiveness. We received no training. There was no brainstorming about lessons. We were given no information about the specs of the computer labs. Space was reserved and we were expected to fill it. Not much considered then, but common knowledge now is the grand distraction desktop computers can be when set in front of students in a class that does not carefully incorporate them into the lesson. And so it was that most of my colleagues continued their lecture format unchanged and most students moved from distractedly doodling to checking news, playing games, and absently surfing. Not unexpectedly, there were complaints that the technology was getting in the way of teaching.

But globally, many thought technology would revolutionize education. Despite our collective administrative and pedagogical missteps, it has. Yet, the reasons technologies didn’t work in those early lecture classes are the same reasons we continue to struggle with implementing them now. We are expecting too much of technology if we believe it will single-handedly fix problems with education. The majority of problems with education extend beyond the classroom: they are societal.

No matter how many laptops we put in classrooms or wi-fi networks we set up, if kids are in a district where schools are closing and class time is reduced due to budget shortfalls, learning is going to suffer. No matter how innovative the online textbook system, if kids are in classrooms where the teacher has received no training or even advanced notice that a new system is going to be used, learning is going to suffer. Regardless of how promising the innovation, it will suffer from the lack of technical support in a majority of districts or increasingly higher demands on teachers without appropriate increases in training and support.

Challenges outside the classroom affect learning within. I wonder how a student is expected to thrive academically when parents struggle to make ends meet, where a single parent is supporting a family, where kids are raised in deprived conditions (defined by UNICEF as lacking basic items essential to healthy development, such as three meals per day or a quiet place to study). To put it into context, the U.S. had the second highest levels of child poverty among economically advanced countries in a 2012 UNICEF study and ranked a low 31st among 35 Organisation for Economic Co-operation and Development (OECD) countries in providing services to families living below the poverty line.

Facing these societal challenges, clearly technology can level the playing field, but cannot be the only leveller. Education involves multiple facets of which technology is only a part. “Fixing” education involves long-term change, with incremental progress toward results and likely many steps backward in the process. Yet this approach is expensive, requires committed advocates, and will not yield immediate gains.

And if we’re honest, the story of long-term change isn’t as engaging as the story of tech fixes. Pictures of kids eating breakfast at school (social fix) doesn’t have the same resonance as a circle of kids illuminated by iPads (technical fix), perhaps because we assume breakfast should be a basic human right and the iPads promise a brighter future. Public attitudes affect policymakers’ focus, so in moving toward change, we need to pay attention to the stories that engage us.

Speaking of stories, while there is much talk about the “brokenness” of the educational system, less clear is what a successful system would look like. What do we want from education? Popular discussion seems to revolve around low international test scores. Is our aim then to earn higher scores on the PISA test? Are we aiming to improve education to raise our global economic competitiveness? When we compare the U.S. with countries that score high on the PISA test, the U.S. ranks No. 10 GDP per capita, with Finland, No. 16, and South Korea, No. 34. If economic competitiveness is our aim, why rely upon PISA test scores to determine the fate of our schools?  How are we measuring success in education? Are we looking at number of diplomas, attendance levels, those who go onto college, unemployment rates, GDP? When determining the competitiveness of our school system, do we compare innovation internationally, perhaps ownership of global companies, or do we want to compare levels of inequality, the spread between our wealthiest and poorest citizens? What specifically needs fixing, why, and how will we know when we’ve fixed it? In other words, how can we expect technology to solve problems we can’t clearly define?

The promise of technology is compelling and I think all of us would like to hope that buying iPads for a local school will improve academic performance, promising kids an improved future that includes college, sustainable professional jobs, and meaningful contributions to the economy and civil society. But as Lant Pritchett points out in The Rebirth of Education (2013), the differences technology can make for a given school represent a very small percentage of the type of momentum necessary for significant progress toward these goals.

No example is more vivid than the efforts by One Laptop Per Child (OLPC) to accomplish the ambitions of its name. Now that the project has sold laptops globally, a few implementations have been studied and clear trends are emerging. Despite its founding vision to promote individual ownership of laptops among children, successful programs are those embedded in larger infrastructural initiatives that, as in the case of Uruguay, view the interconnections between education and its citizenry. Emphasizing social support, the Uruguay implementation includes expanding its national wireless connectivity with a focus on schools and creating community hotspots to extend this access. Free laptop repairs are available via post or at community repair centers. A national effort is underway to develop content for teacher training and for classroom instruction that includes programs on YouTube and local cable stations (Kozma & Vota, 2014; Warschauer & Ames, 2010).

In Uruguay’s national discussions, the OLPC laptops are part of a larger effort to improve quality of life through a strengthening of its school system and improved connectivity. As Uruguay’s program continues to grow, it is in stark contrast with a program started in Birmingham, Alabama in 2008 and discontinued in 2011. In Birmingham, the local mayor saw laptops as a promising way to fix the school system and, without consulting said system, purchased 15,000 laptops for students in first-fifth grades. With no investment in improving the technical infrastructure to allow for connectivity in the schools, no investment in the broader community’s technical access (so that parents could support children’s use), and no teacher training, the program was deemed a failure (Warschauer, Cotten & Ames, 2012).

Yet, the Birmingham mayor’s expectations are not completely unreasonable. So many promising stories exist around technology and education that it seems that a laptop might bring drastic improvements.

Cost-wise, an investment of around $300 per pupil for the XO laptop is much cheaper. Long-term improvements involve infrastructural change, investment in families, and a shift in priorities, which are expensive. Elementary and secondary schools, as well as higher education institutions continually face budget cuts, suggesting that the money is just not there to invest in long-term change to our education system. Nonetheless, Joseph Staten made a compelling argument with his infographic comparing the costs of a year at Princeton ($37,000) versus a year in prison ($44,000). The same infographic shows that between 1987 and 2007, spending on corrections increased 127% while spending on higher education in the U.S. increased only 21%. Other studies show the overall costs of long-term incarceration versus education, and the significant differences prison inmates versus college graduates contribute to the economy and larger society. Perhaps a shift in priorities could manifest significant long-term change.

While not the universal fix some may see it to be, technology is important for education. A few moments of browsing the DML blogs will show strong examples of technology’s promise. Yet, until we address the more challenging core societal issues suffocating our schools, we will be continually patching together promising technology fixes with minimal returns.