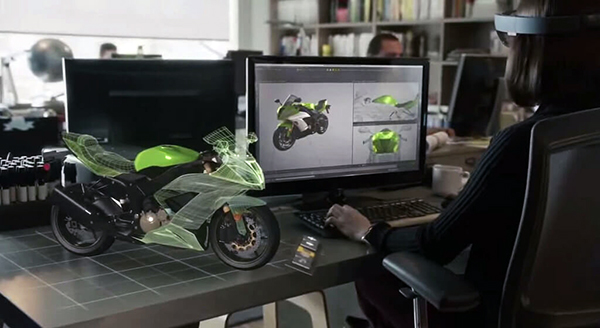 A year ago, I wrote “Augmented Wearables and the Future of Museums” for DML Central. Back then, most everything was in the conceptual realm. Tools were not yet for sale and most weren’t even available yet for developers. Boy, has a lot changed in one year (and I’m not even talking about Pokémon Go, which I did write about here a few weeks ago).

When I was a kid, no baseball game was complete without a box of Cracker Jacks. I still feel that way. A few weeks ago, at a game with my family, I reached around the sticky caramel popcorn to retrieve my prize. I was shocked by what I found: the prize was virtual. Partnering with the British augmented reality app developer, Blippar, the “prize” was a sticker which, when paired with the Blippar app, revealed one of four different augmented baseball-themed games.

In my 2015 post, I suggested a framework for understanding both augmented and virtual reality devices by understanding their social and spatial affordances. For example, one device might be best for a museum visitor to augment the world around her (me & here) while another device is best for a group of people to play together in a fantasy world (we & there). That framework has since been picked up by a leader in the field of museums, the American Alliance of Museum’s Center for the Future of Museums, to frame their topic in their annual TrendWatch report (and whose fearless leader, Elizabeth Merritt, I interviewed for DML Central earlier this year).

Identified as one of the five most important trends affecting museums in 2015, the report asks, “Why go to a museum when you can just don a headset to experience fabulous sights, sounds, touch — and hang out with friends — without leaving home?” On the other hand, the report wonders, “can AR/VR experiences provided beyond museum walls help win new audiences?” The AR/VR chapter does an excellent job framing the history of this conversation while highlighting recent museum examples from around the world.

In the past few months, I’ve encountered other terms and frameworks in use. The May cover article in Wired Magazine, “The Untold Story of Magic Leap,” by founding executive editor Kevin Kelly, is a crash course in the latest and greatest in virtual reality (and its relatives). It’s essential reading for anyone interested in the topic. Amongst other things, Kelly identifies two important things that make VR special. The first is the “intense and convincing sense of what is generally called presence.” You feel like those virtual landscapes, objects, and characters are really present with you. That leads to the second strength of VR: the sensed reality of the virtual makes you feel like you actually had an authentic experience. “People remember VR experiences not as a memory of something they saw,” Kelly argues, “but as something that happened to them.”

Kelly also brings in the term “mixed reality” (or MR for short) to describe a number of devices that a user wears like a pair of super goggles and, more often than not, while tethered by hardline to a computer. The best I can figure is that MR is augmented reality through a worn device. When I saw Graeme Devine, of Magic Leap, present on his company last week at the Games For Change Festival, he, too, used the term MR (which is where Kelly might have picked it up). Devine defined it as “the mixture of the real world and virtual worlds so that one understands the other.” The power of MR, as I came to understand it, is that AR typically uses one discrete target (like a coin or sticker) to trigger an augmented experience while MR maps the shape of a room and uses that entire map as the canvass upon which to paint. In other words, with MR, the entire surrounding space is in play for layers of augmentation (an exciting prospect for museums). 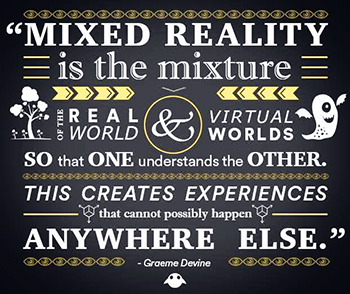 Speaking of the Games for Change Festival, the game designer and professor Jesse Schell gave a talk on the future of VR (“The Future of Virtual Reality and Education”) in which he shared a different frame for these devices. There are mobile devices, like Google Cardboard, that allow you to walk around. And there are VR experiences that let you see (and use) your hands, like with the HTC Vive, but often leave you tethered to a computer. What’s coming next is a combination of the two — a device that allows you to be mobile and to have an embodied experience that interacts with the virtual environment. I found this useful, from a designed experience perspective, but I’ll still be sticking with my social/spatial framework, to keep museum’s situated within AR/VR/MR’s emerging ecology of experiences.

But wait, there’s more. Devine and Schell were not the only ones at Games for Change tackling the topic. In fact, nearly EVERY SINGLE session I attended did the same, including my own (about MicroRangers). Game designers. Educators. Researchers. Journalists. It was the topic on everyone’s lips. So what does that mean?

I suspect it means expectations are being raised. But what expectation? In June, Consumer Reports detailed findings from a VR market research report from Greenlight VR. They found that the desire for educational uses of VR outweighed the desire for gaming uses. Perhaps that’s good. Or perhaps all this attention was best encapsulated by the following Tweet during the Festival: