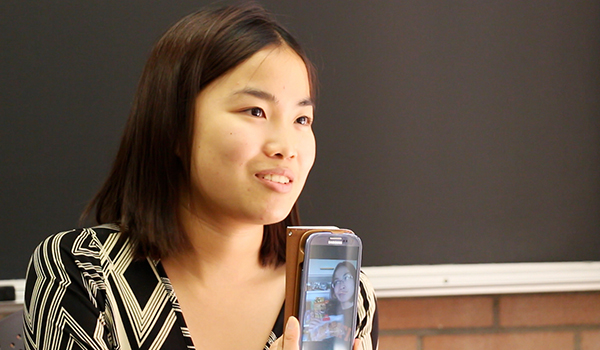 We profiled Mark Marino of the Humanities and Critical Code Studies (HaCCS) Lab at USC on this blog five years ago in a post about innovative approaches to service learning. In 2015, we wanted to return to his digital pedagogy in the college writing classroom as part of a four-part series on teaching with selfies. National and international news organizations have been reporting on his recent work at the University of Southern California, but unfortunately this coverage has sometimes reinforced generalizations about the supposed superficiality, narcissism, and anti-intellectualism of young people, stereotypes that he had hoped to dispel.

In an interview with DML Central, Marino explained his own own initial skepticism about teaching selfies and how he thought this new digital genre focused on self-representation might be just “a fun fad to investigate” without “a lot of substance there.” However, the work of two prominent scholars of digital media — SelfieCity researcher Lev Manovich and author of Seeing Ourselves Through Technology Jill Walker Rettberg — influenced his decision to design a new course on “Selves and Selfies: Performing Identity Online.”

“I was assigned to teach the thematic of identity and diversity in a relatively new course, ‘Writing 150,’ subtitled ‘Writing and Critical Reasoning,’ ”  Marino said, explaining that he wanted to start with “a practice students would likely be well versed in.”

Unfortunately, as Marino observed, “there were a lot of preconceptions among students about what counted as a selfie. They — like many people — had reduced selfies to merely the behavior of stereotypical young women who were excessively vain and self-centered. Once we opened up selfies, we followed up on Jill’s work in two directions: one was opening up the many forms of image-sharing online including Snapchat; the other direction was to look at the history of self-representation, not just portraiture but semiotic self-representation of all kinds that was fundamental to human culture. This could include writing, such as autobiography, letter writing, and journaling.” 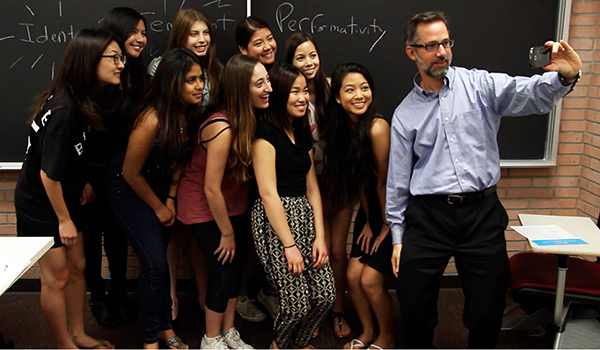 Marino noted that privacy is “always a concern,” so he designed course expectations to be “flexible” so that students received reinforcement for critical thinking and were “not rewarded for divulging more.” From the start, in their first “know thy selfie” paper, illustrated with five selfies, “they have the option of really deciding what aspects of themselves they want represented.”

Marino explained that in emphasizing “self and performance,” students were also encouraged to draw on the ideas of Erving Goffman, Herbert Gans, Stuart Hall, and others concerned with how the construction of the image of the self and self-representation approached identity “more from the angle of something you are trying to create for other people, which took a lot of their papers out of the realm of compulsory confession. This kind of self-reflection scrutinizes aspects of self consciousness. It’s different than a personal essay; it is a crossover essay that allows critical self-representation, semiotic analysis, and image analysis.”

Students also created a “specular selfie” that according to Marino “represented themselves in some future moment, which could be later that evening collapsing on their books or 10 years later in a future job.” They also produced a Vine-length short video in which they received a package containing an abstract concept (such as white privilege) in an homage to popular “unpacking videos.” In thinking about the social dimensions of self-representation and identity, they also generated a network analysis of their Facebook friends to consider the degree to which these groups of interlinked friends were homogenous or heterogeneous, as a way to understand how social architectures might be shaping their Facebook feeds.

Marino isn’t afraid of incorporating levity and improvisation in his pedagogical experiments. For example, students participated in two different “netprovs.” (See this definition from Rob Wittig of netprov to understand how students can use online social media as an episodic space for creative performance and play with real-time participation.) In #1wknotech, students begin to think about digital rhetoric pointed “outward for the web” as they claim to give up technologies for a week, even though they are still broadcasting that renunciation with social media. Similarly, the netprov I Work For the Web provided an opportunity for college students to “reflect on the free labor they produce, following the ideas of Trebor Scholz about unpaid but seemingly recreational “playbour” that tech companies capitalize upon.” (Scholz has also been the subject of a DML profile.) “These two netprov performances functioned as thought experiments, which allowed them to think more critically about their subject positions on the Internet, while at the same time playing with these self-representations, so that within the context of the class, we explored how they used social media outside of class.”

“We talk a lot about satire and humor in the classroom because a lot of the time students have been exposed to different forms of humor that they aren’t thinking all that critically about. On the best side of that, there are moments that they can articulate in a satirical tweet the double binds that technology puts them in. Unfortunately, not all humor contains these kinds of insights, particularly if they reproduce and retell jokes that they have heard that have sexist, classist, or racist overtones that they might not be that savvy about. Luckily, that’s been happening less since we’ve been having more conversations about representation.”

Marino talked about teaching developing writers to be more sensitive to others, especially considering their privileged positions as students at a prestigious institution and the need for instructors to “take time to create safe places and stronger relationships within the class.” In an exchange orchestrated with UCLA’s Miriam Posner, who was also active in the selfie pedagogy movement, Marino’s class approached the collaboration in XtownSelfies “as a different channel of communication, not just one-way posting in pursuit of likes.” As he explains, “both groups were engaging in common language and recreating what it is to be in dialogue.”

Marino pointed out that students were also required to engage in a semester-long service project with the nearby Foshay Learning Center as part of the Neighborhood Academic Initiative, which serves urban high school youth. “These programs bring undergraduates to special classes, pair them with Foshay students to help the high school students write personal statements and, thus, help those potential undergraduates with self-representation.” In evaluating “how does that encounter help?” Marino uses “the original selfies that [his students] took in the beginning of the semester” before they were paired up with different neighborhood literacy projects as an “opportunity to consider what it means to encounter someone with a different position of access to learning opportunities and higher education. Perhaps this encounter teaches them something about educational equity, the nature of someone else’s road to education in the United States, and how they come off to somebody of a very different background. In some cases, the difference wasn’t all that significant: one of the USC students was a graduate of the neighborhood academic initiative, but that is the exception rather than the rule.”

You can learn more about the JEP (Joint Educational Project)  by visiting links to Reader’s Plus and the Neighborhood Academic Initiative. A USC press release on Marino’s work also tries to set the record straight about the academic rigors of such courses.

For the rest of this series and for more approaches to selfie pedagogy, check out previous DML postings about Marino’s peers Miriam Posner, Alice Marwick, and Terri Senft.